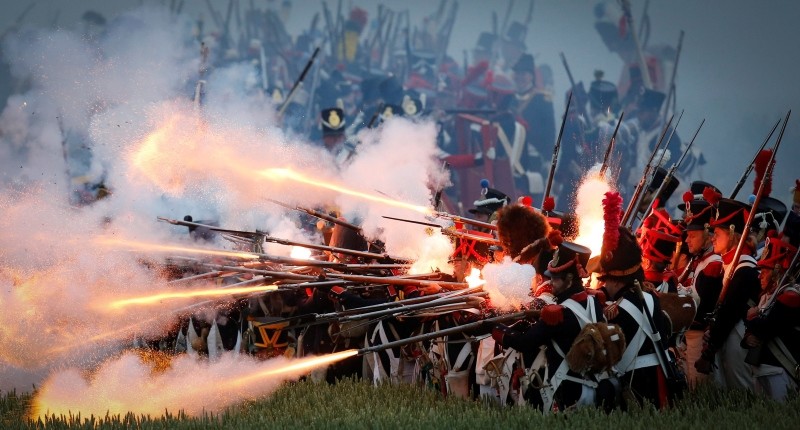 This file photo shows re-enactors perform on the battlefield during the first reenactment of 'The French Attack' during the bicentennial celebrations for the Battle of Waterloo, in Braine l'Alleud, Belgium, June 19, 2015. (EPA Photo)
by Oct 30, 2018 12:00 am

German construction workers have uncovered a mass grave in the western city of Mainz thought to hold the bodies of German and French troops who died of typhus after the 1813 Battle of Leipzig, the local archaeological authorities said on Tuesday.

The skeletons probably numbered more than 1,000, Jens Dolata, archaeologist for the Rhineland-Palatinate Cultural Heritage Directorate, said. Mainz was at the time under French occupation.

According to Dolata, the bodies had been carefully interred in rows.

The grave was uncovered after a local shooting club started preparations to set up a shooting range.

Dolata said a solution would be found to ensure that the grave was not further disturbed. "Reinterring all the skeletons is not possible in fact," Dolata said.

The Battle of Leipzig, also known as the Battle of the Nations, was fought October 16-19, 1813. Napoleon's French forces were decisively beaten by a coalition of Russian, Prussian, Austrian and Swedish forces.