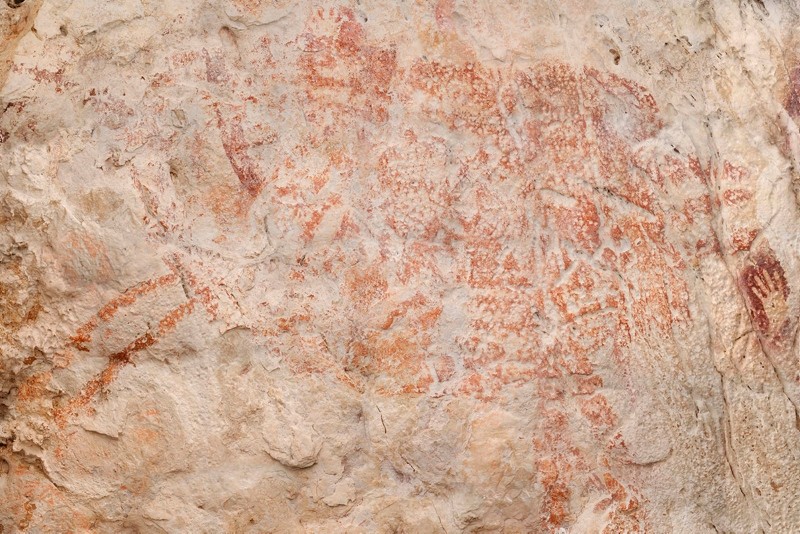 Scientists have found the oldest known example of an animal drawing: a red silhouette of a bull-like beast on the wall of a remote Indonesian cave.

The sketch is at least 40,000 years old, slightly older than similar animal paintings found in famous caves in France and Spain. Until a few years ago, experts believed Europe was where our ancestors started drawing animals and other figures.

But the age of the drawing reported Wednesday in the journal Nature, along with previous discoveries in Southeast Asia, suggest that figurative drawing appeared in both continents about the same time.

The new findings fuel discussions about whether historical or evolutionary events prompted this near-simultaneous "burst of human creativity," said lead author Maxime Aubert, an archaeologist and geochemist at Griffith University in Australia.

The remote limestones caves on Borneo have been known to contain prehistoric drawings since the 1990s. To reach them, Aubert and his team used machetes to hack through thick jungle in a verdant corner of the island.

Strapping on miners' helmets to illuminate the darkness, they walked and crawled through miles of caves decorated with hundreds of ancient designs, looking for artwork that could be dated. They needed to find specific mineral deposits on the drawings in order to determine their age with technology that measures decay of the element uranium.

"Most of the paintings we actually can't sample," said Aubert.

Aubert and his fellow researchers reported in 2014 on cave art from the neighboring Indonesian island of Sulawesi. They dated hand stencils, created by blowing red dye through a tube to capture the outline of a hand pressed against rock, to almost 40,000 years ago.

Now, with the Borneo cave art, the scientists are able to construct a rough timeline of how art developed in the area. In addition to the bull, which is about 5 feet (1.5 meters) wide, they dated red- and purple-colored hand stencils and cave paintings of human scenes.

After large animal drawings and stencils, "It seems the focus shifted to showing the human world," Aubert said.

Around 14,000 years ago, the cave-dwellers began to regularly sketch human figures doing things like dancing and hunting, often wearing large headdresses. A similar transition in rock art subjects happened in the caves of Europe.

"That's very cool, from a human point of view," said Peter Veth, an archaeologist at the University of Western Australia, who was not involved in the study. "People adopted similar strategies in different environments as they became more modern."

The island of Borneo was still connected to mainland Southeast Asia when the first figurative drawings were made about 40,000 years ago — which is also about the time that the first modern humans arrived in Europe. The earliest drawings of animals in the French cave of Chauvet have been dated to about 33,500 to 37,000 years ago.

Whether new waves of people migrating from Africa brought the skills of figurative cave painting with them, or whether these arts emerged later, remains unclear. Scientists have only a partial record of global rock art. The earliest cave etchings have been found in Africa and include abstract designs, like crosshatches, dating to around 73,000 years ago.

The next stage of research in Indonesia will include excavations to learn more about the people who made these paintings. A few sites have already been identified, containing human bones, prehistoric jewelry and remains of small animals.

As for the red bull, its meaning remains a mystery.

"We think it wasn't just food for them — it meant something special," said Aubert.