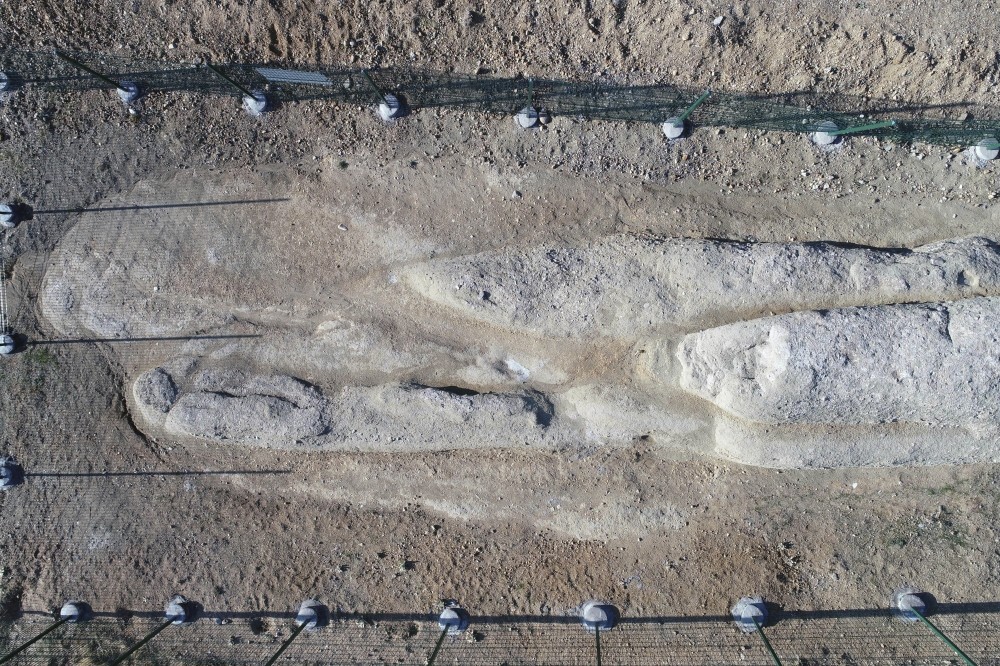 Known as the dragon stone in the historical Harput neighborhood of Turkey's eastern province of Elazığ, and the subject of many local legends, the giant boulder will be opened to tourism.

Called the "dragon stone," as it resembles a dragon, the boulder is located on an area of 529 square meters, about 2 kilometers away from the historical neighborhood. The giant boulder was put under protection by the Elazığ Municipality Conservation Applications and Audit Office (KUDEB). The stone, which local people have told legends about and which is subject of some books, is planned to be opened to tourists after the completion of an official study that will be conducted on the site.

KUDEB authority and expert in art history, Kadir Atıcı, spoke to Anadolu Agency (AA) and noted that as one of the leading settlements in Anatolia since ancient ages, Harput hosted civilizations including Urartus, Persians, Romans, Byzantines, Seljuks and Ottomans. "Hence, Harput also has a super-rich written and oral cultural heritage in addition to its historic layer that stretches from centuries ago up until today. In a way, the dragon stone in the historical neighborhood and the legend told about it are the reflections of this deep culture."

Explaining that they put the stone under protection and cleaned it as it had fallen into ruin and was covered by soil throughout time, Atıcı added, "As the dragon stone was a natural stone, it was standing in the same place for years. However, it was considerably covered by soil and had sunk into oblivion, as it wasn't under protection. To be able to make use of our oral culture to some extent, as Elazığ Municipality, we immediately conducted environmental planning measures and took the soil that covers the gem and made it visible."

'Dragon and its cubs were petrified,' legend says

Atıcı noted that the dragon stone and legends about it are still told by the local people.

Also written about by various writers, the stone is the extension of a story that started to be told in the 12th or 13th century and has survived up until today, transforming into a legend.

"The legend says that a dragon comes through Harput with its cubs to devour the people, and the local people consult Fethi Ahmet Baba, one of the leading scholars of the time. The people of the time want Fethi Ahmet Baba to pray in their name so that they can escape the wrath of the dragon. Fethi Ahmet Baba prays for the dragon and its cubs to be removed from the neighborhood. The prayer comes true and the dragon becomes petrified with its cubs on an area 2 kilometers away from Harput. Needless to say, this is just an oral and cultural legend of Harput," Atıcı said.

Atıcı stated that once the comprehensive study they are conducting around the dragon stone, which had been taken under protection by the municipality, is completed, they plan to open the stone to tourists in or around the month of August in 2019.