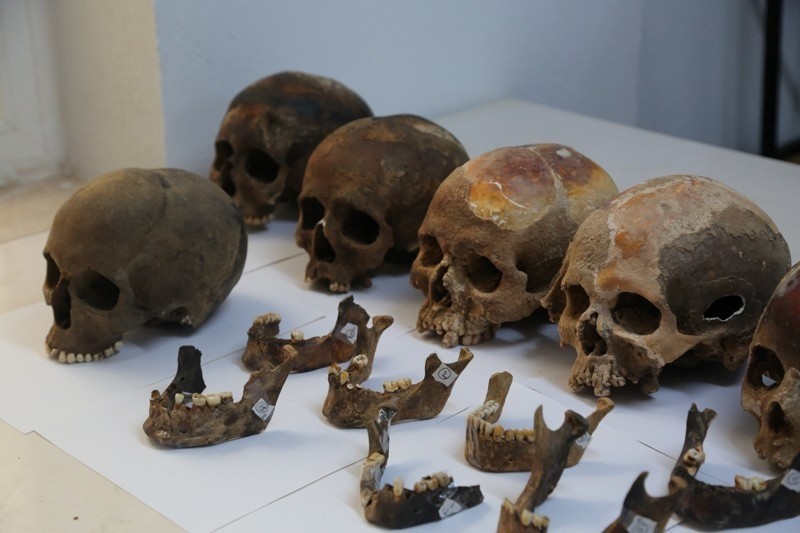 A mass grave in southern Turkey dating back thousands of years could give new insight into the people of that era, according to Turkish researchers.

The burial site full of prehistoric skeletons was discovered around a year ago in a cave called Kadıini in southern Antalya province's Alanya district by a group of extreme athletes between the 400 and 800-meter marks of the route leading up to the cave. The athletes took photos and told anthropologists at the nearby Süleyman Demirel University (SDÜ).

"[The skeletons] hold important data that could shed light on biological and morphological features of the peoples of that era," the Chalcolithic and Early Bronze Ages, anthropologist Nalan Damla Yılmaz Usta told Anadolu Agency on Wednesday, announcing the find.

A team of researchers did a one-week study with the archaeological excavations and found around 100 human skeletons dating back some 5,000-7,000 years.

Usta added that this was the first time such a mass grave was found in a cave in Anatolia.

She explained that the remains were located in the branches of the cave and some bones were mixed with each other due to collapses and floods in the cave, but added that "some of the samples were in situ, and not harmed."

"Some remains have come to this day as they were buried, but some were merged with the karstic sediment that accumulated at the bottom of the cave over time. When you look at the samples, some skulls have a layer covering them, which is a karstic formation completely attached to the bones. Some of these layers could be removed in a laboratory via scraping," Usta said.

The prehistoric people probably used the depths of the cave as a kind of tomb, she said, adding that there were also other archeological findings in the cave apart from the skeletons. "Among these, we also came across gifts for the dead. Some skeletons feature burn marks. This, of course, gives us clues about their burying rituals; perhaps these marks occurred when they tried to treat the sick and purify them from illnesses."

Iron ions in the cave kept the skeletons well-preserved, she said.

As there are few remains from the Chalcolithic and Early Bronze Ages in Alanya as well as the rest of Anatolia, the discovery is important, Usta underlined.

From their findings so far, Usta said they have determined that the community had a settled life and raised livestock.

Usta also said that they are still trying to designate the demographical features of the individuals, such as their ages of death, life expectancies or the diseases they had and their belief systems.