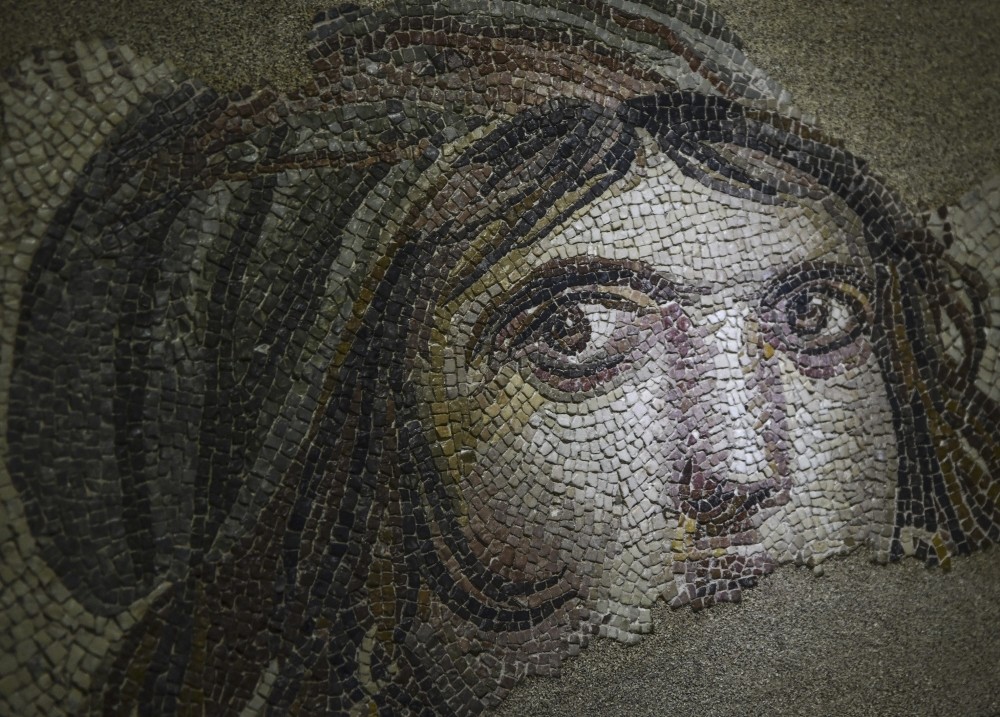 With the recent return of the ‘Gypsy Girl' mosaic to Gaziantep, its original homeland, the artifacts repatriated to Turkey in the last 14 years are currently in the spotlight

In the aftermath of Turkey regaining the lost pieces of the world-renowned "Gypsy Girl" mosaic and its exhibition at Gaziantep Zeugma Mosaic Museum, the spotlight is now on other artifacts that were repatriated. According to data by the Ministry of Culture and Tourism, 4,310 historical artifacts were returned to Turkey, to the land where they belong, between 2004 and 2018. The ones returned by the U.S. and U.K., on the other hand, were among the top priority on the list of repatriated artifacts in the last five years. These important artifacts include a coat of arms of the Ottoman Empire that dates back to Sultan Abdulhamid II and a Turkish flag which was submitted to the Turkish Embassy in London by a British citizen. It is said that the flag was lowered upon the seizure of the Ottoman Base in Damascus by the British Corps during the World War I and it was given to the grandfather of the aforementioned British citizen by British Gen. Edmund Allenby.

Culture and Tourism Minister Mehmet Ersoy spoke on the repatriated artifacts. Noting that historical artifacts can stand as beautiful and meaningful only on their own lands, Ersoy stated that all countries of the world must act responsibly on the issue and such artifacts, which are part of a common cultural heritage, should be protected in their home countries and preserved for the following generations there.

Ersoy also reiterated that the stolen pieces of the famous Gypsy Girl mosaic were opened for viewing on Dec. 8 with a press meeting held at Gaziantep Zeugma Mosaic Museum. Ersoy answered questions on the repatriated historical artifacts and noted that the Interior Ministry and Foreign Ministry conducted coordinated work for the repatriation of the cultural heritage of Turkish origin via diplomatic negotiations. 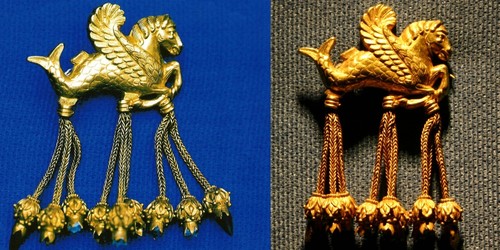 The winged seahorse brooch is one of the repatriated treasures.

Throughout the negotiation process, they made use of bilateral agreements, ethical values and international acts on cultural property. Ersoy also noted that the Ministry of Culture and Tourism already embarked on negotiations with various countries including Germany, the U.

Ministry data shows that, 4,310 illegally trafficked cultural assets were repatriated between the years of 2004 and 2018. The countries that returned smuggled artifacts to Turkey are the U.S., Germany, Austria, the United Arab Emirates (UAE), Bulgaria, France, Croatia, the U.K., Switzerland and Serbia. While the U.S. and U.K. come in the first among the list of the countries that returned the most in the last five years, the repatriated artifacts include a coat of arms of the Ottoman Empire, a Turkish flag, a winged seahorse brooch, amphoras, coins, and the Sarcophagus of Hercules and Golden Crown that dates back to the 4th century B.C.

According to the data presented by the Ministry of Culture and Tourism, in 2013, 30 historical artifacts were repatriated including coins from Austria, sepulchral monuments and the door wings of the Aksaray Grand Mosque Minbar from the U.K. In 2014, on the other hand, 86 assets were returned to Turkey including amphoras, tombstones and votive plaques from the U.S., a crock pitcher from Austria and bronze cultural assets in addition to various assets. The repatriation of the Turkish Flag mentioned before was also completed in 2014. In 2015, Turkey regained 39 illegally trafficked historical artifacts including sarcophagus pieces, plaques, a bull figurine and two manuscripts. In 2016, the U. S. returned a coat of arms of the Ottoman Empire dating back to the time of Sultan Abdulhamid II and marble architectural pieces from Ephesus. A year later, 44 assets including human remains, a crock pitcher, shell casings, the Sarcophagus of Hercules, manuscripts and ceramic tiles were returned.

Ersoy noted that for the time being there are 153 ongoing excavations and added, "We are working on a project to prolong excavations up to 12 months. In the first step, we decided to support 20 excavations on the condition that the excavation periods will be prolonged and they will employ more archaeologists."