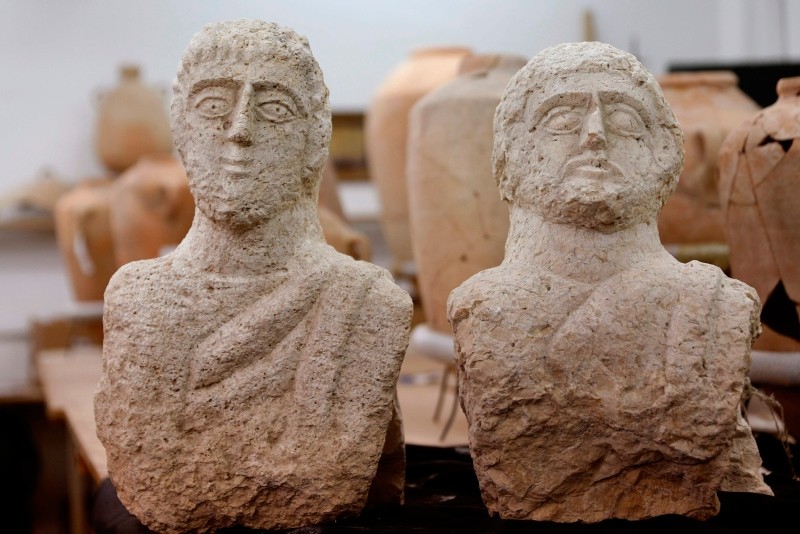 A picture taken at the Israel Antiquities Authority (IAA) laboratories in Jerusalem on December 30, 2018, shows a limestone busts that the IAA dated to the late Roman period (AFP Photo)
by Dec 30, 2018 12:00 am

An Israeli woman walking near ancient ruins noticed a head sticking out of the ground, leading to the uncovering of two Roman-era busts, archaeologists said Sunday.

The life-size sculptures, carved in limestone, were found in the northern city of Beit Shean earlier this month, with the Israel Antiquities Authority dating them to the late Roman period, some 1,700 years ago.

The well-preserved busts are of men, one of them bearded, sculpted in the Oriental style that was becoming fashionable at the end of the Roman period, according to Eitan Klein, deputy head of the IAA's theft prevention unit.

The sculptures emerged north of Beit Shean's national park, where the ruins of a Roman and Byzantine city lie, probably thanks to the recent rains.

"Busts like these were usually placed near or in a burial cave, and they may have represented the image of the deceased along general lines," Klein said in a statement.

The IAA said the finder would receive a "certificate of appreciation" for her good citizenship in reporting her discovery to the authorities rather than taking them for herself.

The busts were expected to be put on public display after researchers gleaned what information they could from them.