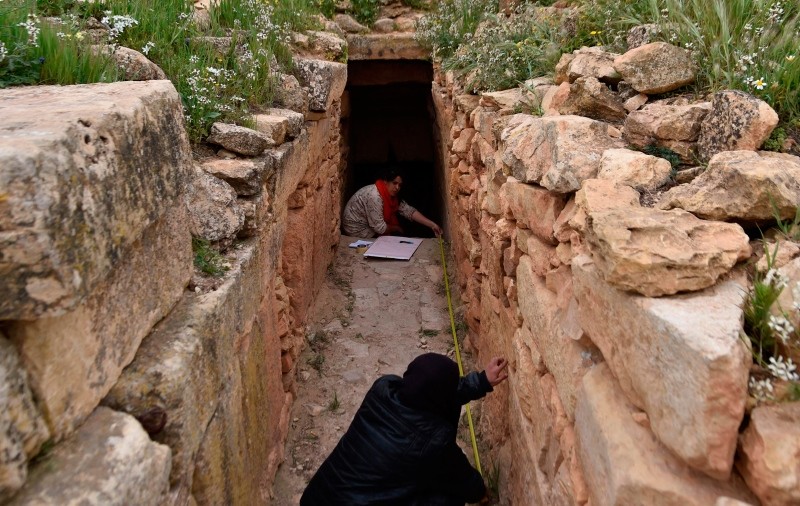 Experts and students from Algiers Universityu2019s Archaeology Institute work on one of the Jeddars pyramid tombs, near the city of Tiaret (AFP Photo)
by Jan 14, 2019 12:00 am

Dating back centuries, Algeria's pyramid tombs are unique relics of an ancient era but a dearth of research has left the Jeddars shrouded in mystery.

The 13 monuments, whose square stone bases are topped with angular mounds, are perched on a pair of hills near the city of Tiaret, some 250 kilometers (155 miles) southwest of the capital Algiers.

Constructed between the fourth and seventh centuries, the tombs are believed by some scholars to have been built as final resting places for Berber royalty -- although nobody knows who truly laid within.

But Algerian authorities and archaeologists are now pushing to get the Jeddars listed as a UNESCO World Heritage site, in the hope of assuring their preservation and study. 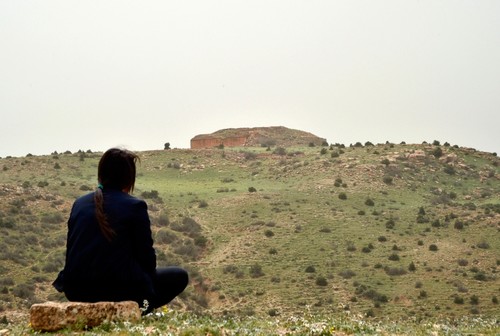 Gaining such status is a lengthy process and the culture ministry said Algeria's application to the U.N. body "will be filed during the first quarter of 2020."

Experts from the National Centre for Prehistoric, Anthropological and Historical Research have for more than a year been preparing their case for the Jeddars.

The goal is to "preserve this heritage, which is of immeasurable value and an ancestral legacy," said Mustapha Dorbane, a professor at Algiers 2 University's Archaeology Institute.

When the Jeddars were built, Berber kings ruled the area in small fiefdoms whose history is poorly known and of which few traces were left.

It was a period of great unrest for the former Roman province of Numidia, as Rome's western empire collapsed, Vandal and Byzantine troops, invaded, and Arab forces stormed across North Africa.

For centuries these far-flung monuments sat largely ignored, delivered to the ravages of time and looters.

But more recently a group of around 20 archaeology students and their teachers has been working at the monuments.

Moving slowly, they noted vandalized spots and used water and brushes to gently clean stone-engraved symbols before measuring them.

A meticulous task, each entry may take upward of two hours.

Algerian archaeologist Rachid Mahouz, who has spent five years on a doctoral thesis about the tombs, deplores the lack of research devoted to the country's "wonders."

"The French archives on the Jeddars are not available and the objects and bones found during the colonial era were taken to France," said Mahouz, who was born and raised nearby.

Archaeology was not taught at Algerian universities until the early 1980s, and until now, no specialty on funerary monuments is offered.

The research team has been working on Jeddar A, which sits on Mount Lakhdar along with monuments B and C.

The remaining Jeddars are on a hilltop some six kilometers away, Mount Arouri, and are known by the letters D through M.

Each contains at least one room, with the largest mound giving way to a labyrinth of 20 compartments, including funerary chambers.

Some rooms are equipped with benches, areas researchers believe may have been used for worship.

Inside the tombs, traditional Christian symbols, as well as hunting scenes and animal figures, are carved above the doors.

Traces of inscriptions believed to be Latin mark the walls, but time has rendered them unreadable.

Among the layers of history, researchers say they have also found Greek letters -- although others dispute this.

The Jeddars were built several centuries after other imposing pre-Islamic funerary monuments, which are found in present-day northern Algeria, making them the last of their kind to be erected before the arrival of Islam.

"The most distinctive feature of the Jeddars is by far the date of their construction," said Mahouz, the archaeologist.

The monuments show the evolution of burial practices in the area. From simple mounds of earth and stone, known as tumuli, to stone-walled tombs called bazinas.

But with some reaching heights of 18 meters (60 feet), some researchers say the size of the Jeddars put them in a category of their own.

The earliest known written description of the Jeddars was made by historian Ibn Rakik in the 11th century, according to famed Arab thinker Ibn Khaldoun.

It was not until the mid-19th century and the first modern archaeological explorations in Algeria, brought on by French colonialism, that the Jeddars began to draw attention.

French troops and colonial authorities began explorations in 1865 of nine of the tombs.

Understanding of the Jeddars was boosted in the late 1960s by Algerian archaeologist Fatima Kadra's three-year study of Jeddars A, B and C -- the oldest of the 13 and the only ones to be explored since Algeria's independence.

But several of the structures have never been entered, as gravity and time have brought mounds of dirt and stone crashing down on the tombs within.

Looting and deterioration have worsened an already difficult task for modern-day researchers with little backing.