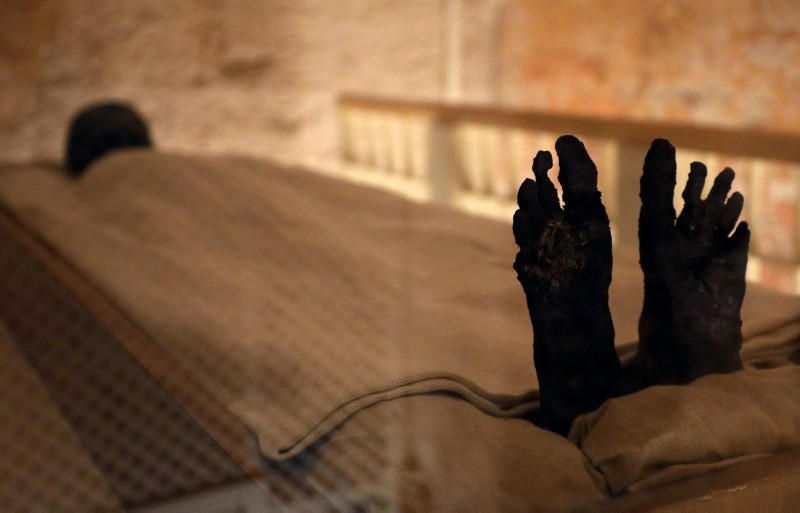 After almost a decade, a team of international experts on Thursday revealed the results of their painstaking work to preserve the tomb of Egypt's legendary Pharaoh Tutankhamun.

Nearly a victim of his own fame, long years of mass tourism had left their mark on the boy king's burial place near Luxor on the east bank of the Nile River.

"A hundred years of visits, after being sealed for 3,000 years... can you imagine the impact on the grave?" said Neville Agnew, head of the project led by the Los Angeles-based Getty Conservation Institute.

"Visitors, humidity, dust..." lamented the scientist during the unveiling ceremony at the tomb, discovered in 1922 by British archaeologist Howard Carter in the Valley of the Kings.

Called to the rescue in 2009, Agnew has led a 25-member team -- including archaeologists, architects, engineers and microbiologists -- to preserve the tomb and fend off the ravages of time and tourism.

Interrupted during Egypt's 2011 uprising and the political instability that followed, the project later resumed its work and finished up this month.

The preservation work began with a comprehensive study of the funeral chamber, including its ornate golden-yellow murals, which had been blanketed over the decades by a gray veil of dust.

Lori Wong, a curator specializing in murals, specifically looked into the "material composition of the paintings and how it was applied."

The goal in doing so was "to understand the current state of the paintings, to determine if they were in danger and to establish a plan to safeguard them for the future," she told AFP.

Scientists brought heavy-duty microscopes into the royal tomb, which they refer to as KV62, to analyze mysterious "brown spots" found on its ancient artwork.

Researchers had worried the spots were a fungus that might spread and damage the murals of Tutankhamun's life.

Careful analysis showed the blotches were indeed of microbiological origin, but the organisms were long dead.

One problem still remained: the deeply embedded marks were impossible to remove.

"We did conservation, not restoration," said Agnew, adding that the mission had been to stabilize and protect the site.

"The brown spots are also part of the story," he said, adding they had not developed since Carter's discovery.

Architects worked to redesign the platform where visitors stand to keep them away from the fragile walls, and engineers developed a new ventilation system to limit the devastating effects of carbon dioxide, moisture and dust.

While some of the most cherished pieces of Tutankhamun's treasure are now held at the Egyptian Museum in Cairo, the tomb still holds the Pharaoh's mummy in an oxygenless glass box, along with his outer sarcophagus -- made of gilded wood.

Famed Egyptian archaeologist and former antiquities minister Zahi Hawass, who initiated the project, said that the project had "saved the tomb of Tutankhamun."

"Still I really think after this great work that has been done, we need to limit the number of tourists who enter inside," he added.

"If we let mass tourism enter this tomb, it will not last more than 500 years," he warned, advocating for a complete halt of visits to the site.

Tourists could instead visit a replica built nearby, he added.

"We have to think of the future from now. In 500 or 1000 years if we leave the tourist situation like this, the tombs of the Valley of the Kings will be completely finished."