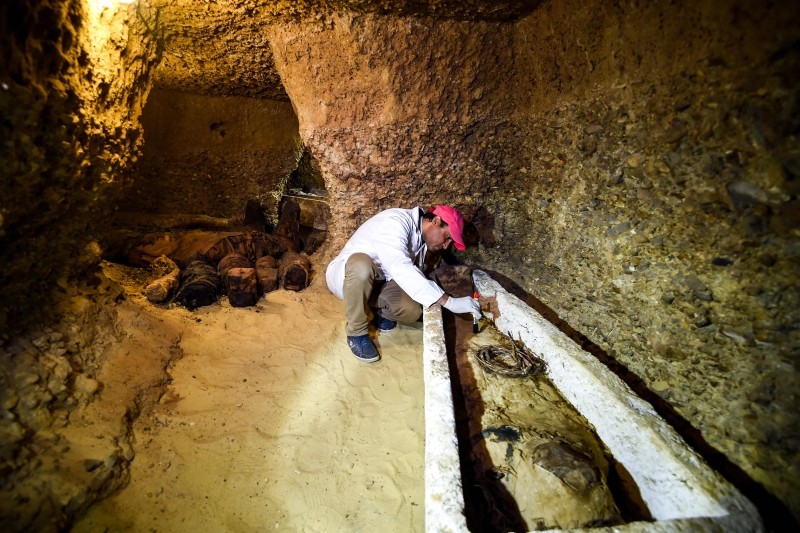 Egypt says it has discovered a number of ancient burial chambers containing some 40 mummies in the desert province of Minya, south of Cairo.

Officials told reporters on Saturday at the site that the chambers, which were cut out of rock, belonged to a middle-class family who probably lived during the Ptolemaic, early Roman or Byzantine period.

The mummies are in good condition and at least 10 are of children. Some were decorated with "demotic handwriting" — a form of ancient Egyptian script used by ordinary people. Pottery, papyri and colorful mummy cases were also unearthed.

The identities of the mummies were still unknown, said Mostafa Waziri, secretary-general of the Supreme Council of Antiquities.

"We have not found names written in hieroglyphics," he said, adding it was obvious from the mummification method that the individuals whose remains were found had to some extent held important or prestigious positions.

Visitors, including ambassadors from several countries, gathered at the discovery site where 40 of the mummies were exhibited during the announcement ceremony.

Some of the mummies were found wrapped in linen while others were placed in stone coffins or wooden sarcophagi.

The archaeological finding was the first of 2019 and was unearthed through a joint mission with the Research Centre for Archaeological Studies of Minya University.

Egypt has made a series of archaeological finds recently, and it has been heavily promoting them to revive its tourism industry, a staple of its economy that was decimated by the chaos that followed its 2011 uprising.