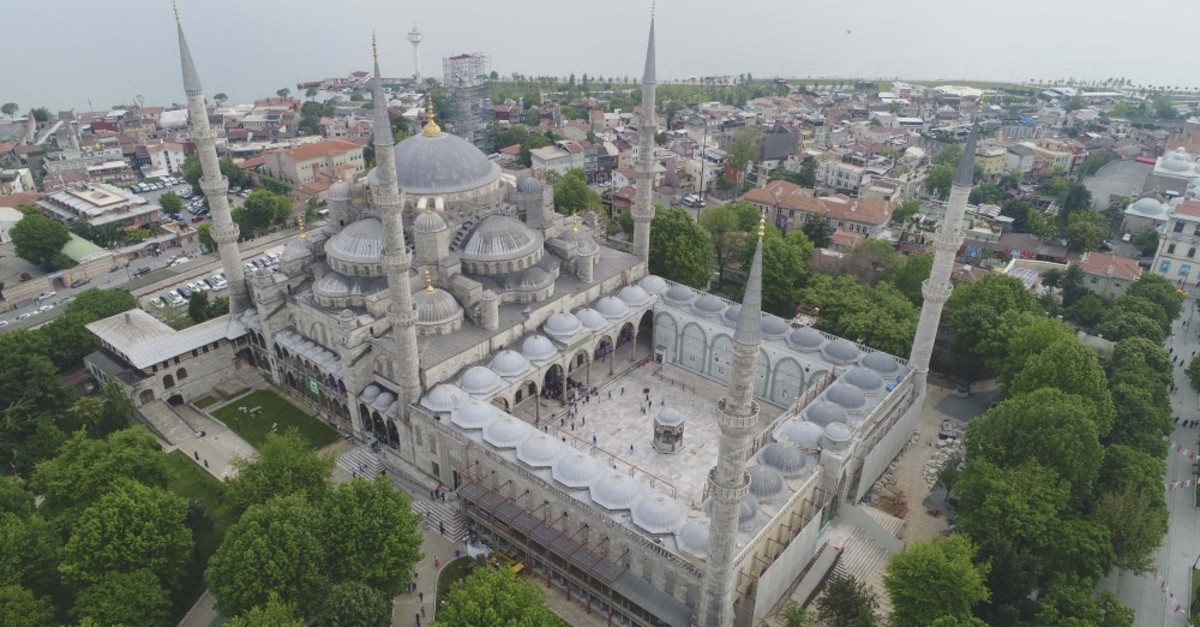 The Blue Mosque is undergoing the most comprehensive restoration in its 400-year history.
by Anadolu Agency May 22, 2019 12:10 am

The first and only six-minaret mosque of Ottoman architecture, Istanbul's famous Blue Mosque is undergoing the most comprehensive restoration in its 400-year history.

The Mosque, contributing to the silhouette of Istanbul, was built by architect Sedefkar Mehmet Agha at the order of Ottoman Sultan Ahmed I and opened to worship in 1617. It was built across Hagia Sophia museum, which served as a church at that time.

Mürsel Sarı, a local official of the Turkish Directorate of Foundations, told Anadolu Agency (AA) that the most comprehensive restoration of the Blue Mosque began on July 6, 2017. The restoration works of the mosque, known officially as the Sultan Ahmet Mosque, is being sponsored by a Turkish businessman.

Steel piers that are 43 meters high from the ground to the dome were installed for the restoration of the Mosque.

"There are certain difficulties in the restoration process," Sarı said.

"Because it is very important work we should not disrupt worship, and it was necessary to do the restoration without hampering the influx of visitors," he said.

The Blue Mosque, which attracts tourists with its beauty, has 21,043 tiles of more than 50 designs produced in İznik and Kütahya in the late 16th and early 17th centuries.

"There are 50 different patterns in these tiles because the dominating tone of the tiles and pencil works on the inner walls are blue, foreigners called this place 'Blue Mosque,'" said Sarı. Expert restorers examined the hand-drawings on the inner wall of the main dome, 43 meters high from the ground, before they are cleaned and restored.

The 400-year-old gates of the mosque were preserved in a workshop built in the mosque's courtyard. All the trim and pencil works on the mosques inner walls and domes are going through a detail and meticulous restoration.Amid the restoration work, worshipers continue to perform their daily prayers in the mosque as it hosts around 30,000 tourists every day. The official mentioned that the restoration work could take more time and money than that projected before launching the works.

"At the beginning of the restoration we forecasted that it would be completed in four years, it is our target to complete it in four years but this process can be extended when we encounter unexpected situations," Sarı said. Sari stated that the cost of the construction at the start was TL 35 million. This figure could go up to as much as TL 60 million.