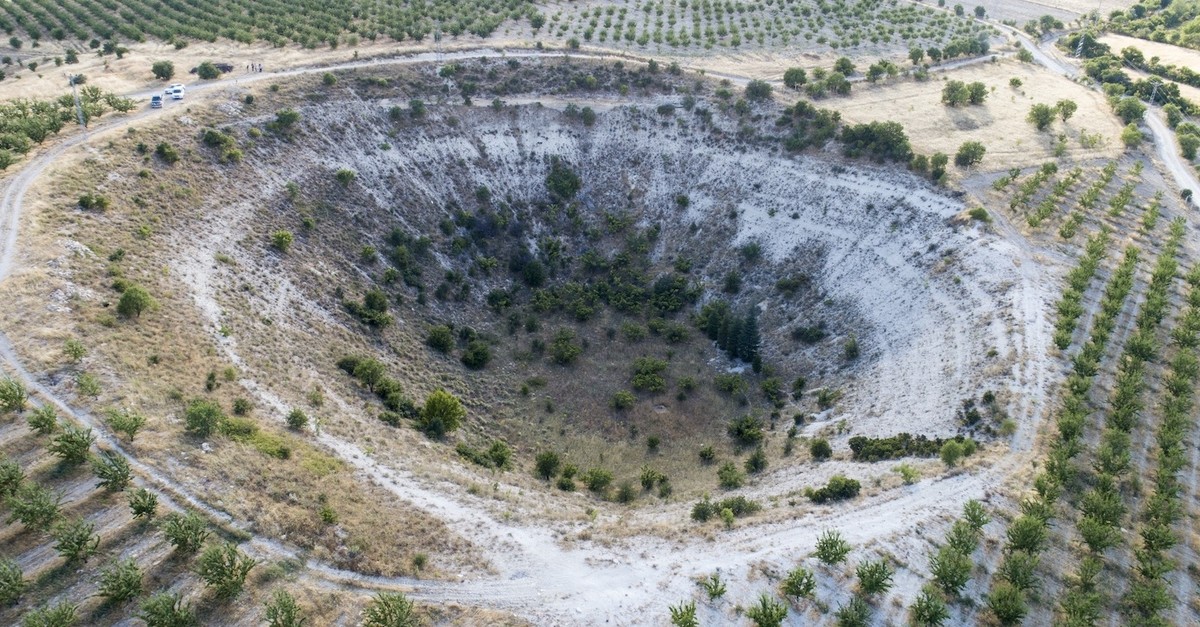 The massive crater resembles a sinkhole, a common sight in central Turkey.
by Daily Sabah Jul 08, 2019 12:05 am

Turkish scientists will launch works to analyze a crater believed to have been formed following the crash of a meteor in a rural area in Turkey's eastern Elazığ province. Located in Ağın district's Şenpınar neighborhood, the crater measures 500 meters in circumference and 50 meters in depth. Referred to as "kup" by the local population, the crater has attracted hundreds of visitors.

District Gov. Fatih Cıdıroğlu told the Anadolu Agency (AA) that kup has quickly become a touristic site, as many people who visit the Keban Dam Lake, Hastek Fort and ancient rock tombs also come to see the crater. Cıdıroğlu said officials will commission experts to find out how the crater was formed.

Şenpınar village head Ahmet Emin Erben noted that the crater is one of a kind in the region and said people want to learn how it was formed.

Ağın Mayor Ali Uslu said the crater has been there for as long as he can remember.

"While some of our great grandparents called kup a meteor crater, others claimed it was a sinkhole," Uslu said, adding that kup's mystery contributes to its interest.

The number of sinkholes in Turkey's central province has rose substantially in recent years due to excessive use of groundwater for irrigation.

Located on the Euphrates River, Keban Dam was constructed in 1974 and is the third largest hydroelectric power plant in the country.

Local resident Saim Bozkurt told the Ihlas News Agency that kup was actually deeper when he was younger. "During the construction of Keban Dam, some officials came here and drilled to see if there was any water, but there was none," Bozkurt said.