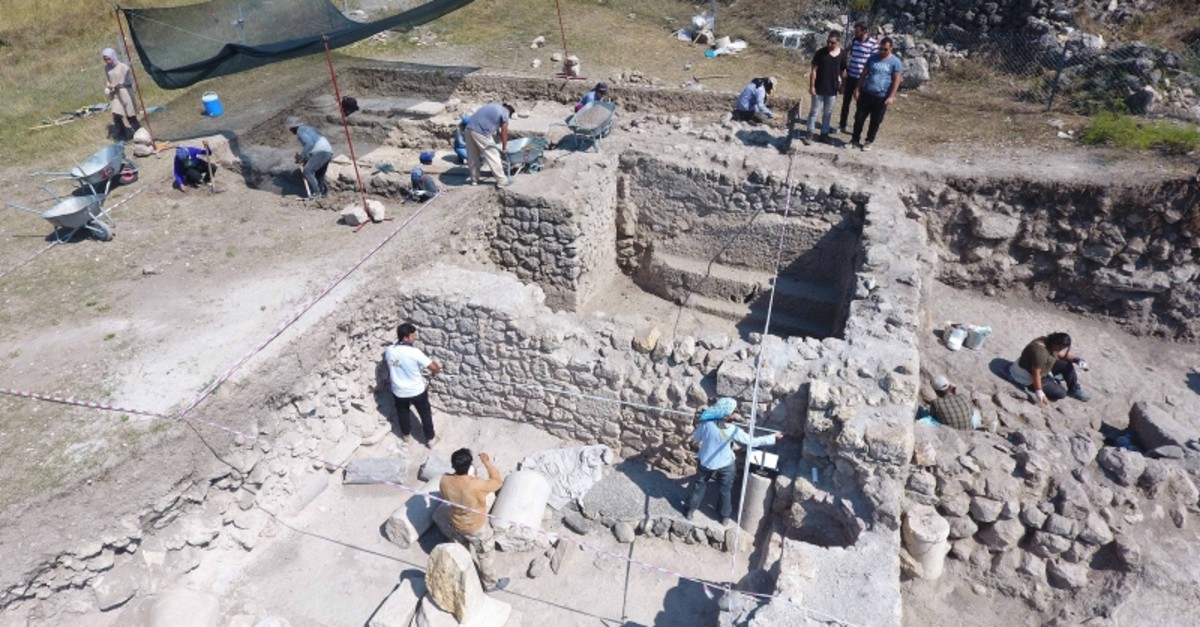 Excavation works have revealed a rock tomb believed to date back to the second century A.D. in an ancient Christian pilgrimage site in northern Turkey's Karabük province in the western Black Sea region.

Birthplace of the Saint Alypius the Stylite, the ancient city of Hadrianopolis was an important site of pilgrimage for early Christians until the city lost its importance in eighth century A.D. It is also known as the Zeugma of Turkey's Black Sea region due to the mosaics have been found in the area.

An excavation team led by Ersin Çelikbaş from the Archelogy Department of Karabük University found three ancient coins, a bone fastener and an unguentarium – a small ceramic or glass bottle – in the rock tomb.

Çelikbaş told reporters that they have discovered 33 tombs of different sizes and shapes so far, but they were thinking that the cemetery belonged to a later period until the most recent discovery changed their hypothesis.

"The findings showed that the grave dates back to the second century A.D.," Çelikbaş said, adding that they believed the Necropolis area, where the tomb was unearthed, dated back to the fourth or fifth century A.D.. before the latest discovery.

"This is very important archaeological data for us," Çelikbaş said, noting that they are trying to shed light on the mysterious time periods of the region and the western Black Sea as a whole.

Çelikbaş said that the excavation works being carried out at the "Church C" and Necropolis areas will continue until the end of the month in those areas.

He said that the team believes it has discovered important findings in both areas which are important for the history of that ancient site, which is believed to have been used as a residential area during the Late Hellenistic, Roman and Early Byzantium periods.

Çelikbaş stressed that they have also identified a different structure adjacent to the church in the Church C area, which they think a workplace for local glass production. They had previously discovered various glasses of the same color, in blue and green tones, suggesting the presence of a workshop in the area.

"In the base of the structure, the remains of a hearth and coal were found," he said, adding that they have discovered another Roman structure in the Church C area, which is yet to be identified.

The excavation works on the ancient site initially began in 2003 and two baths, two church structures, a defense structure, rock tombs, a theater, and a vaulted and domed structure have been unearthed so far.

Believed to have lived between the sixth and seventh centuries A.D., Saint Alypius the Stylite is one of the Christian faiths' pillar saints, who spent their lives preaching, fasting and praying atop pillars. The ancient site became a Christian pilgrimage site in his honor.