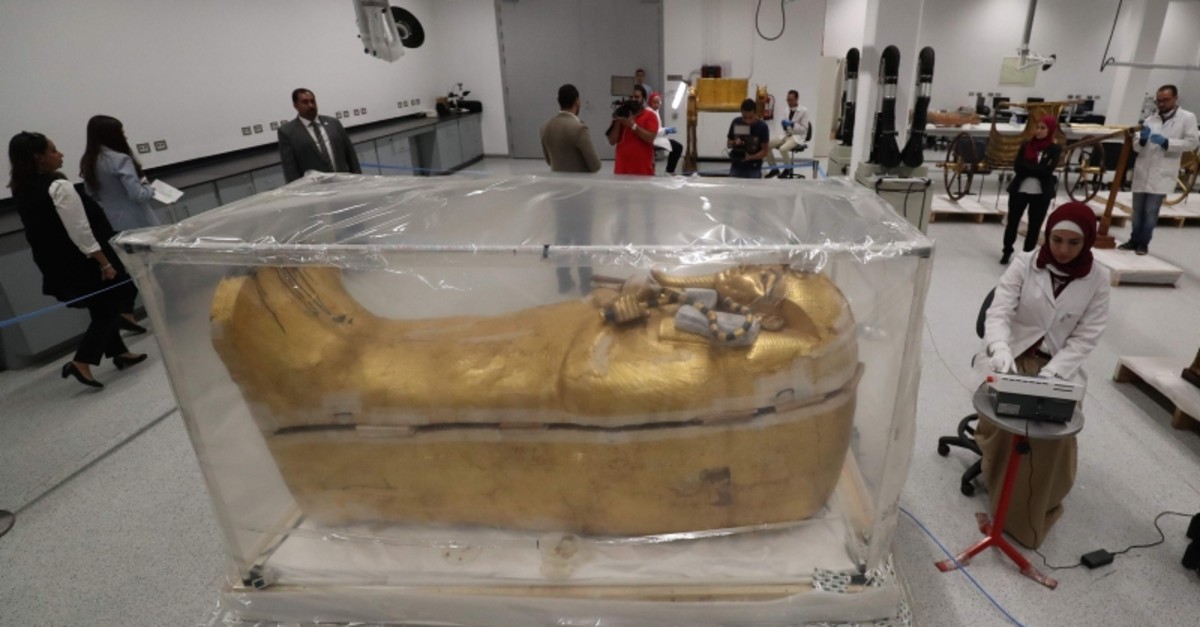 The gold-covered sarcophagus of King Tutankhamun's coffin is encased in a tent for restoration procedures at the conservation center of the the Grand Egyptian Museum in Giza, near Cairo, Egypt, Sunday, Aug. 4, 2019. (AP Photo)
by Compiled from Wire Services Aug 04, 2019 4:57 pm

Egypt says it has started the first-ever restoration on a gold-covered sarcophagus of the famed boy pharaoh Tutankhamun, ahead of the country's new museum opening next year.

Antiquities Minister Khaled el-Anany told reporters Sunday that work on the outermost coffin, made of wood and gilded with gold, will take at least eight months.

He says that's because "the state of conservation is very fragile, as it was never restored" since 1922, when British archaeologist Howard Carter discovered the intact 3,000-year-old tomb and the treasures it held.

The coffin remained in the tomb until July, when it was moved to the new Grand Egyptian Museum, being built near the famed pyramids of Giza outside Cairo.

The outer gilded wood coffin stands at 2.23 meters (7.3 feet) and is decorated with a depiction of the boy king holding the pharaonic symbols the flail and crook, according to the ministry.

Egypt displays the gilded coffin of Tutankhamun, under restoration for the first time since the famed boy pharaoh's tomb was discovered in 1922https://t.co/QdIG6S88MD pic.twitter.com/y1kcfcQwEK

In the last century, the coffin has "developed cracks in its gilded layers of plaster, especially those of the lid and base."

Sunday's announcement comes after the controversy the pharaoh courted in early July when a 3,000-year-old Tutankhamun artifact was sold in London for $6 million.

Furious Egyptian officials condemned the sale and asked the international police agency Interpol to trace the artifact which it deems looted.

Tutankhamun ascended the throne at age nine, ruling until his death at age 18 or 19.