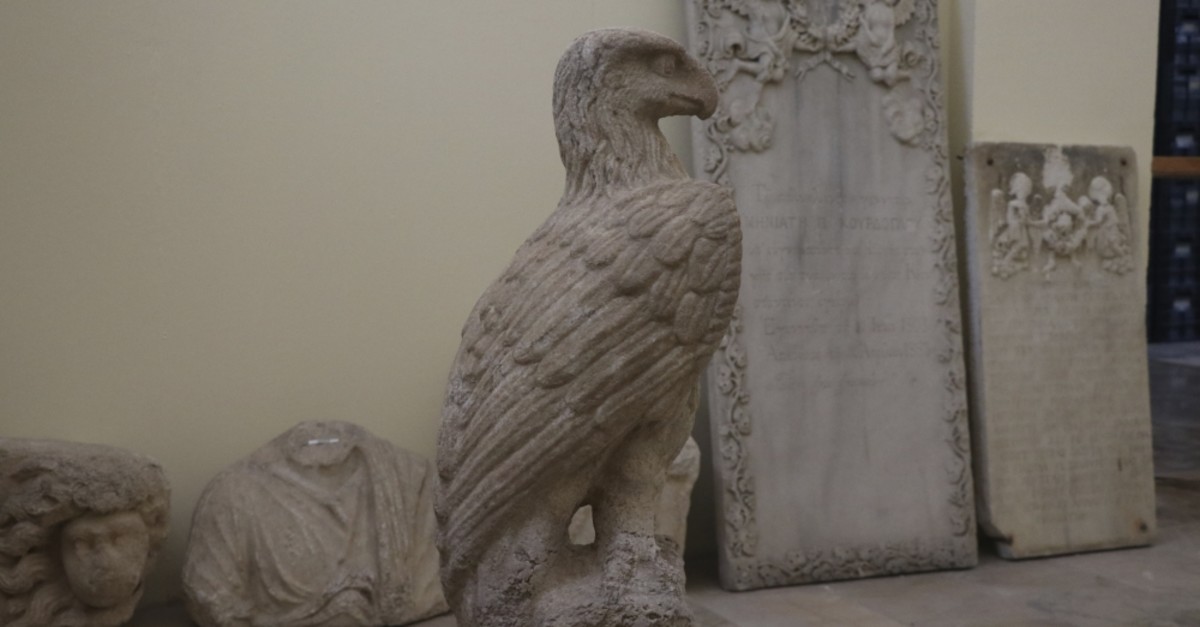 The two eagle statues were uncovered in the pits at a square close to a 2,100 year-old Hellenistic temple discovered last year.
by Anadolu Agency Aug 09, 2019 12:16 am

Archaeologists have uncovered two 2,000-year-old marble eagle statues in a Hellenistic temple at the Kınık Mound, located near the Yeşilyurt village in Niğde's Altunhisar district.

The excavations at the mound are being carried out by a group of Italian, Turkish, American and French archaeologists. The two statues, one worn out and one solid, probably belong to the late Hellenistic period. They were uncovered at the pits of a square near the 2,100-year-old Hellenistic temple discovered last year.

The 70-centimeter eagle statues with their wings closed and their heads turned slightly to the right have wild goats under their claws. They currently being displayed at Niğde Museum following restoration. Another 1-meter-long eagle statue, which was discovered last year, is also at Niğde Museum. New York University professor Lorenzo D'Alfonso, who is leading the excavation team, told Anadolu Agency (AA) that the excavations began in 2011 and have continued since.

He said they found the traces of a new period last year. "We found the Early Bronze Age levels in the lower city. This means that life began as a city at Kınık Mound around 3000 BC and continued until the late Hellenistic period. There are 5,000 years of history in layers. The late Hellenistic period covers the period from 150 BC to 1 AD. We found a large square and dug out two temples. We discovered statues in the pits during the excavation. There are marble, stone and ceramic sculptures. We found two eagle statues this year."

Assistant Head of Excavation Burak Yolaçan of Dokuz Eylül University said they found a large eagle statue last year and that the newly discovered smaller eagle statues are very similar to that one.

Yolaçan explained that the two eagle sculptures were thrown into the pits, probably on purpose, and added, "They were buried firmly, either to be concealed or people did not want to throw them away due to their holiness. Both of the eagle statues can be traced back to the late Hellenistic period according to our initial predictions."

"This is a common motif in the region. There are similar eagle statues in the Nevşehir, Niğde, Kayseri museums and even in the Ankara Anatolian Civilizations Museum. The wings of the eagle statues are closed, their head is slightly turned above the right, and they are standing with their claws on wild goats. We also discovered an inscription close to the statues," he added.

"In a small piece belonging to a base there are inscriptions that say a woman was healed next to a statue of Zeus or the temple of Zeus, and that's why they are making a vow. That is why we believe these eagle statues are related to the worship of Zeus. The wild goat is a motif we don't certainly know the meaning of yet," he added.

"The eagle is a common motif in the region. Animal motifs, deer, bulls and wild goats with an eagle in particular express holiness," Yolaçan said.