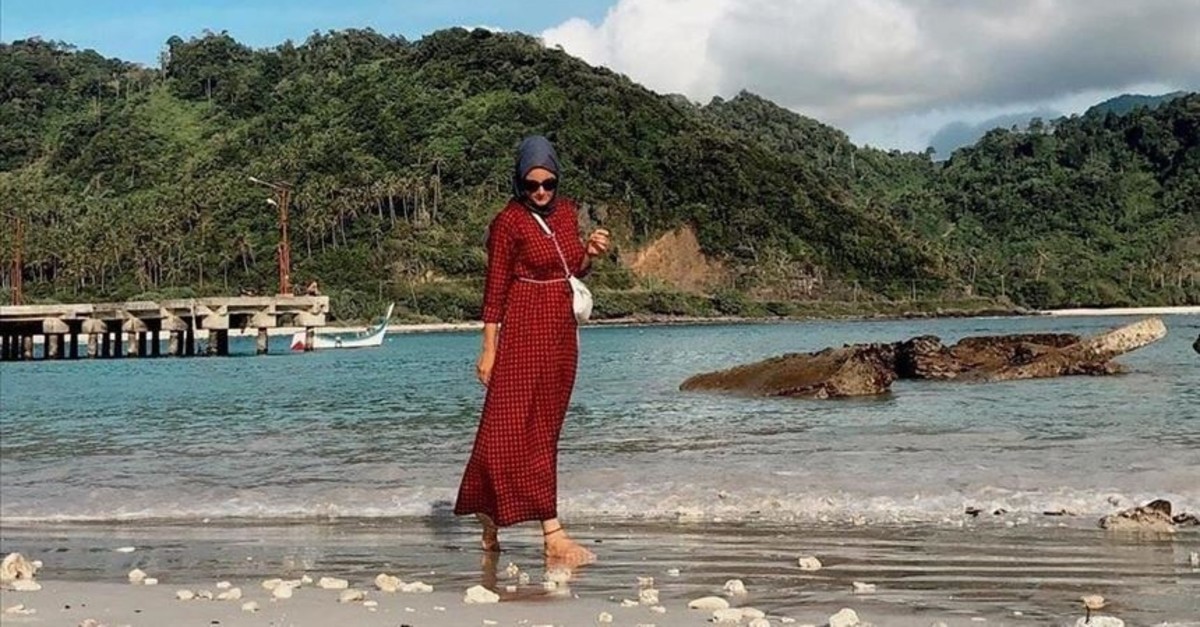 Elif Ku00fcbra Genu00e7 is a young Turkish blogger who influences thousands of people in Turkey.
by Anadolu Agency Aug 23, 2019 12:08 am

A Turkish blogger was surprised to see the enthusiasm with which local people embrace nearly five centuries of brotherly ties between Turkey and Aceh, Indonesia's westernmost province. Elif Kübra Genç said she was flattered by the appreciation expressed by the Acehnese for her ancestors, who set foot in the land 480 years ago.

"I'm very proud that our ancestors are still respected here," the 29-year-old woman told Anadolu Agency (AA) in the city of Banda Aceh on Tuesday after a celebration to commemorate 480 years of brotherhood with Turkey, which goes back to the Ottoman era.

During the celebration, Genç was welcomed by local officials and residents who surrounded her, requesting pictures.

"I'm glad to be here," she said. Her visit to Aceh is part of the "Sun from Turkey" program initiated by the Indonesian Student Association in Turkey to forge closer ties between the two countries. On social media, Genç said during her trip she enjoyed strolling around the beach and blending in with the locals. The pictures she posted on Instagram portrayed the raw beauty of nature Aceh is blessed with. "Just happy, #indonesia #aceh," said the caption of a selfie she posted with the Lampujang coastline in the background. Her posts garnered global attention, with her followers expressing admiration for the beautiful sights. "You're lucky to be in heaven now, hope you enjoy it," she quoted one of the comments written on her post.

As an influencer who actively promotes tourism, Genç said she was glad to invite the Turkish and international community to visit Aceh. "I'm very pleased to introduce Aceh to the world as it has a lot of natural, historical and cultural destinations," she said. "One day, I will come here again as a guide," she added.

Genç flew to the archipelago with fellow Turkish social media influencer Edanur Yıldız. "Being able to come to Aceh is a dream come true. I am happy to be here," said Yıldız.

The 21-year-old student has been actively promoting the culture and lifestyle of Indonesians, especially those in Aceh.

She expressed her interest in writing about Indonesia as the largest Muslim country in the world, adding that Aceh has abundant treasures from the history of its relationship with the Ottoman Empire.

"I promote Aceh and Indonesia through Instagram and Twitter," said Yıldız. "The Muslims here live in an Islamic way. After evening prayers, I saw kids reciting the Quran until night," said Yıldız, who is also learning to speak Indonesian.

Aminullah Usman, the mayor of Banda Aceh, said Tuesday that his administration is determined to establish tourism cooperation with the Turkish government.

"We will arrange a memorandum of understanding to strengthen cooperation," Usman told AA. He said the pact is scheduled to be completed by 2020, conveying his hope for effective cooperation.

"Insha Allah [God willing], we are ready to be invited to Ankara to see President [Recep Tayyip] Erdoğan," he added.