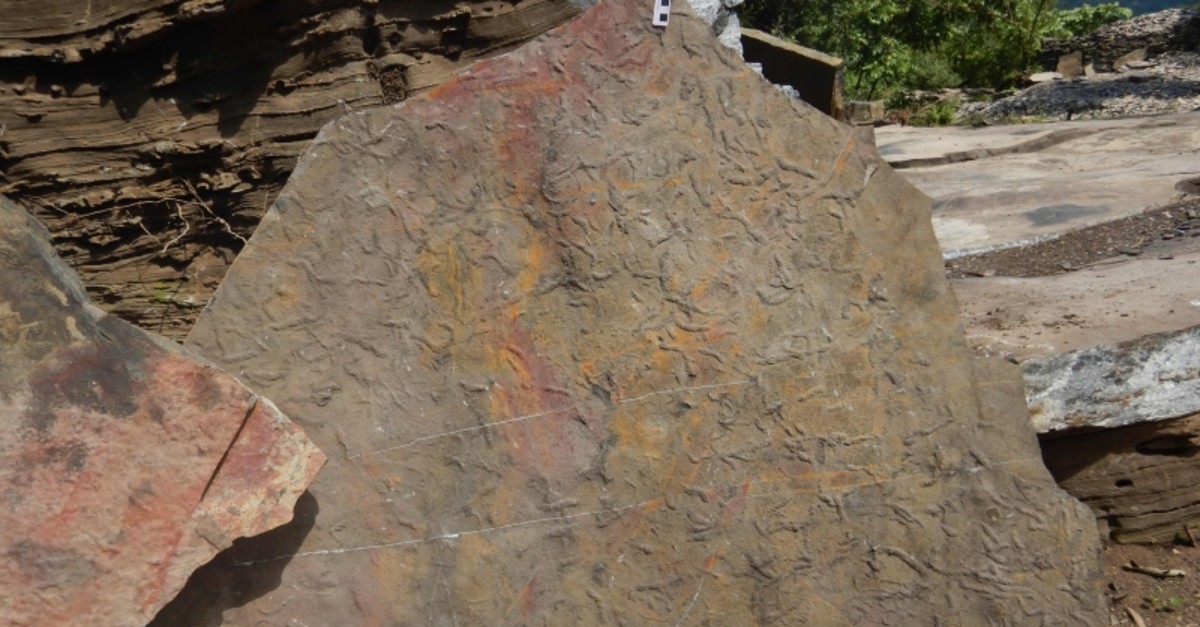 More than half a billion years ago, a worm-like creature wriggled its last, creating a groove preserved as a fossil that offers new insights into some of the earliest animal movement.

The origins of the movement in animal species remains fairly murky, though there is evidence of "directional movement" -- as opposed to the meandering drift of a jellyfish for example -- as early as 560 million years ago.

But records of such early movement are very rare, which makes a series of fossils that provide evidence of the life, and death, of the worm-like Yilingia spiciformis a key find.

Collected between 2013-2018 in southern China, the fossils show a segmented creature something like a millipede that lived 550 million years ago, long before dinosaurs roamed the Earth.

And they include something even rarer: a fossilized "death march" or "mortichnium" -- the trail produced by a Yilingia just before it died.

Experts had long theorized that segmented animals were capable of movement in this time period, but there was no fossil evidence to support the idea.

"We show that animal motility evolved nearly 550 million years ago, although in a rather modest way."

Experts generally believe animals began to move around during a period known as the Ediacaran era, approximately 635 million to 540 million years ago.

But those animals left individual footprints or tooth marks from scraping as they passed over a surface.

"Yilingia is different because it produced long and continuous trails," Xiao said.

The animal that made those long and continuous trails, which are seen regularly in the fossil record from the period, was a mystery until the discovery of the mortichnium -- which neatly displayed a deceased Yilingia at the end of the trail.

The conclusions Xiao and his colleagues draw, published Thursday in the journal Nature, are thanks to the mortichnium, a vanishingly rare find in the world of fossils.

"Think about how many footprints a person would make in its lifetime," Xiao said.

"What is the chance of this person being fossilized together with one of its footprints? Very slim."

The team examined other fossil samples of Yilingia that provided more insights into the creature, which appears to have been up to nearly half a meter (20 inches) long and lived in the sea.

And its discovery may also shed light on a long-running debate about whether segmentation in animals evolved once or twice.

But there are still plenty of questions to be answered, including how and why Yilingia came to be on the move.

"We would like to explore how animal locomotion behaviors may have responded to environmental changes and to understand the function of animal motility -- for example, looking for food, oxygen, or mates; or escaping from predators," Xiao said.

The fossils could also lend weight to the theory that body segmentation in animals was linked to a greater ability to move and maneuver.

"The evolution of segments may have led to a transformative innovation" in the animal movement that paved the way for an explosion of life in the Cambrian period that followed, the paper argues.

Rachel Wood, a professor at the University of Edinburgh's School of GeoSciences, called the discovery a "remarkable finding of highly significant fossils".

In a press release issued by Virginia Tech, she said the rare findings filled in important gaps in understanding about the animal movement before the Cambrian period.

"Such preservation is unusual and provides considerable insight into a major step in the evolution of animals," Wood said.