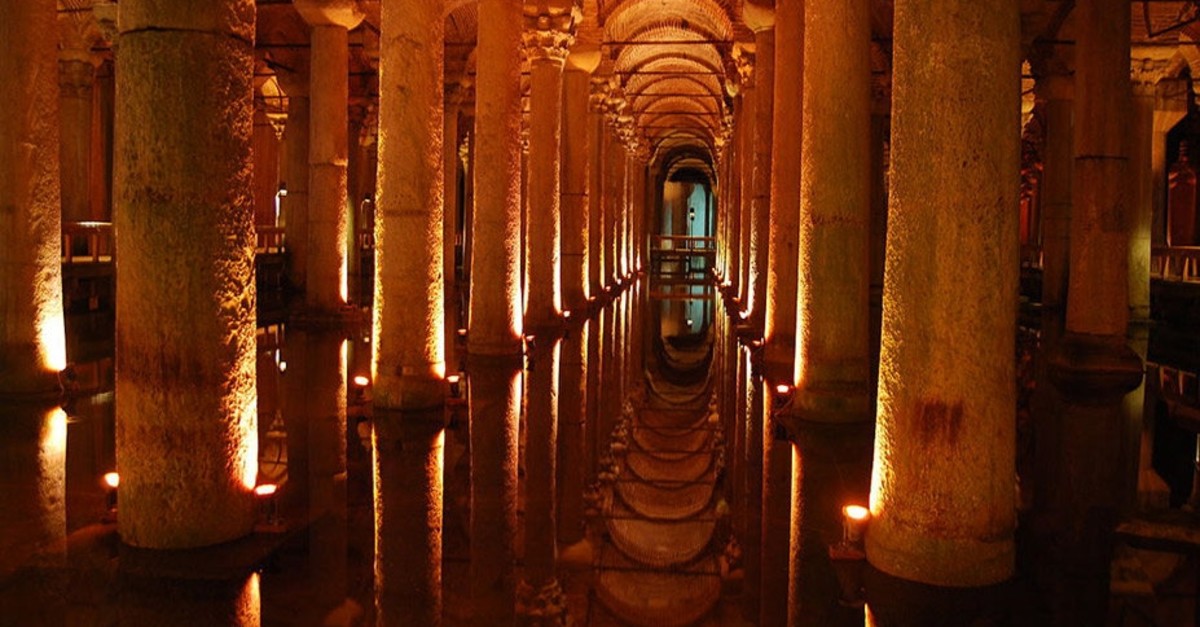 Built by Byzantine Emperor Justinian I in 542, the cistern met the water needs of the Byzantine palaces and other residents in the area.
by Anadolu Agency Sep 07, 2019 12:12 am

The Basilica Cistern, one of Istanbul's most famous historical sites, impresses visitors with its 336 columns, each nine meters long, and two Medusa heads.

Located on the same historical peninsula with the Hagia Sophia and the Blue Mosque, the magnificent place has been the subject of archaeological intrigue as well as Hollywood blockbusters - besides being thronged by thousands of tourists every day. The cistern was built by Byzantine Emperor Justinian I in 542. It was known as the Basilica Cistern because there used to be a basilica at the same location. In Turkish, it is known as the Yerebatan Sarayı or "Subterranean Palace" due to the marble columns rising out of the water. The site is managed by the Istanbul Metropolitan Municipality Culture Co. This cistern is an underground chamber approximately 138 meters by 65 meters. It covers an area of 9,800 square meters, capable of holding almost 80,000 cubic meters of water. The cistern met the water needs of the Byzantine palaces and other residents in the area. It was used for a while after the conquest of Istanbul in 1453. The water was used in the gardens of Topkapı Palace.

Each of the 336 marble columns, placed 4.80 meters away from each other, is unique. Apart from the fluted or sided columns, most of them are cylindrical. While the majority of the columns are made out of a single block, a handful uses two blocks.

The cistern walls are 4.80 meters thick and a floor is made of bricks. The Khorasan mortar used in the cistern makes it waterproof.

Archaeologists say the cistern fell into disuse during the Ottoman Era because the Ottoman's preferred running water. The cistern was brought to global attention by French natural scientist, topographer and translator Petrus Gyllius,

who visited Istanbul in the 1540s to research Byzantine ruins.

His account of the cistern claims people around the Hagia Sophia would extract water from huge holes on the ground floors of their houses. These holes were like deep wells and sometimes they even caught fish. Gyllius entered the cistern by descending underground, after passing through the yard of a wooden building. His account was later published in his travel book. The cistern underwent restoration twice in the Ottoman Era but was not opened for the public until 1987 after extensive repairs were done by the Istanbul Metropolitan Municipality. The last extensive repair and cleaning were done in 1994. It also undergoes periodic repairs and restoration work every season. 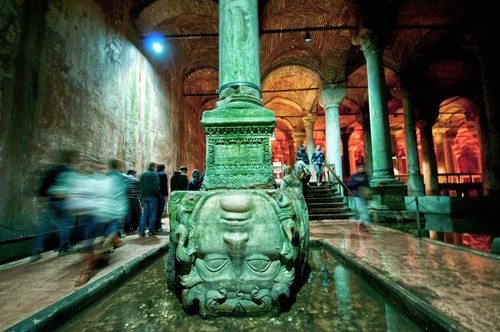 Medusa heads are the identifying architectural features of Basilica Cistern.

The two Medusa heads, two great examples of the Roman era architecture, takes a lot of attention. Both work as the bases for two of the 336 columns located on the northwest side of the cistern. They are thought to have been brought to be used as supports for the columns at the time of construction of the cistern. However, the exact reason is not known. The snake-haired Medusa is a famous character in Greek mythology and one of the three Gorgons of the underworld. The Gorgons have the power to turn others into stone.

In ancient Greece and Rome, their paintings and statues were used to protect important buildings and structures. It is thought that the Medusa heads were placed in the cistern for the same reason. But interestingly, the Medusa heads, a popular Byzantine-era symbol, were placed in reverse and sideways. Other than the heads, one of the columns is engraved with a Hen's Eye, slanted branches and tears. According to ancient texts, the tears pay tribute to the hundreds of slaves who died during the construction of the cistern. The Basilica Cistern can be visited between 9 a.m. and 6.30 p.m. every day.