Historic Mosul mosque to be rebuilt starting in 2020: UNESCO 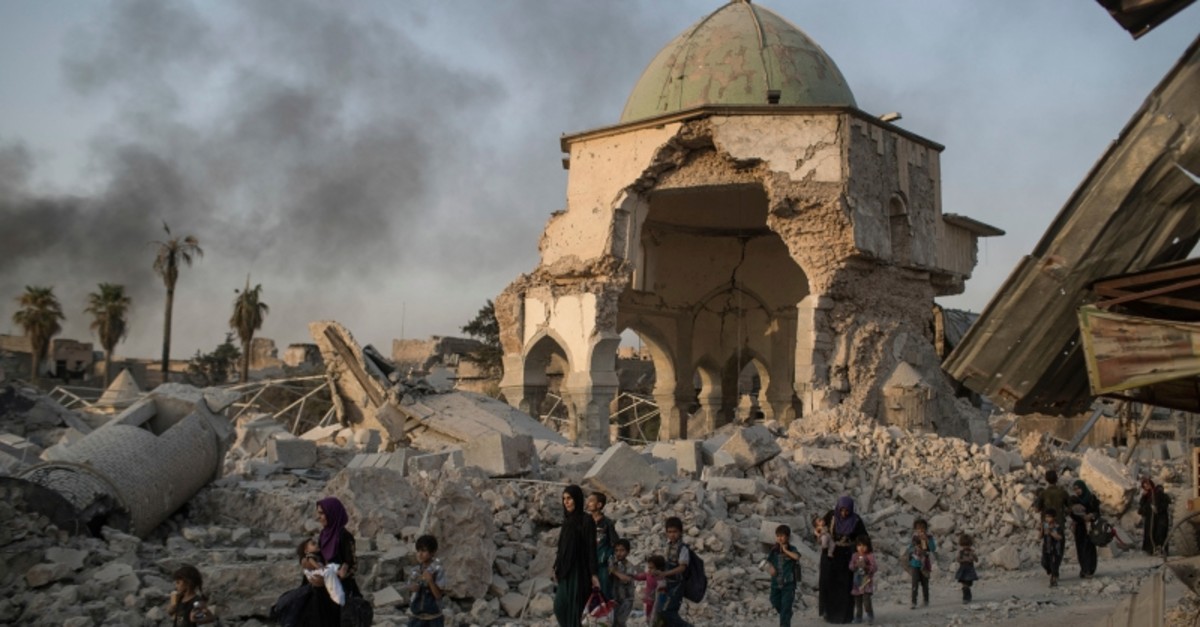 In this July 4, 2017, file photo, fleeing Iraqi civilians walk past the heavily damaged al-Nuri mosque as Iraqi forces continue their advance against Daesh terrorists in Iraq's Old City of Mosul. (AP Photo)
by Associated Press Sep 11, 2019 9:20 pm
The United Nations' cultural agency UNESCO announced Wednesday that a landmark reconstruction of Iraq's al-Nouri mosque in Mosul, which was blown up by the Daesh terror group in 2017, will start at the beginning of next year.

The timeline of the restoration plan of the 12th-century monument, famed for its leaning minaret, was hammered out during a meeting in Paris between UNESCO Director General Audrey Azoulay and several Iraqi officials, including Iraqi Culture Minister Abdulamir al-Dafar Hamdani, and Mosul's regional governor, Mansour al-Mareed.

First launched in 2018, the mosque restoration plan will be the most eye-catching part of a $100 million UNESCO-led heritage reconstruction of Mosul.

"Revive the Spirit of Mosul" is the largest restoration plan in Iraqi history, and comes two years after the old city's destruction at the hands of extremists.

"Today we agreed on a calendar, a precise calendar and plan of action to be mobilized on the ground in Iraq. ... The ongoing phase of structural consolidation and the critical phase of site-clearing and mine-clearing (has) to be achieved from now to the end of the year," Azoulay told reporters.

"We've also agreed on a timetable that would see the reconstruction start in the first semester of 2020 for the mosque," she added.

Daesh leader Abu Bakr al-Baghdadi declared the group's territorial goals from the al-Nouri mosque in the summer of 2014, only for Daesh terrorists to blow it up in June 2017 as Iraqi forces closed in.

Two years after Daesh was evicted, Mosul is a city still very much in ruins with no meaningful international effort to rebuild — one that is still struggling with basic services like electricity, water and health care. The U.N.'s development program is working to restore private houses in the historic Old City. Most of its residents still reside in camps.

The UNESCO initiative goes far beyond the mere restoration of the mosque, and will see the cash be used to rebuild churches, schools and a street in Mosul's Old City, which was famous for its bookshops.

The United Arab Emirates is providing $50.4 million to finance the project, focusing on the restoration of the mosque, with the European Union providing $24 million.

The decision to select Mosul, as opposed to other Iraqi cities, for a revamp owes to its particular history as a melting pot city.

"We've chosen Mosul as a symbol because Mosul was before the conflict a city of diversity, a city of tolerance - more than tolerance - a city where people lived together and knew each other beyond communities, beyond religious belongings," Azoulay said.

She stressed that she's asked that some of the $100 million go toward the rebuilding of a synagogue and Christian religious sites.