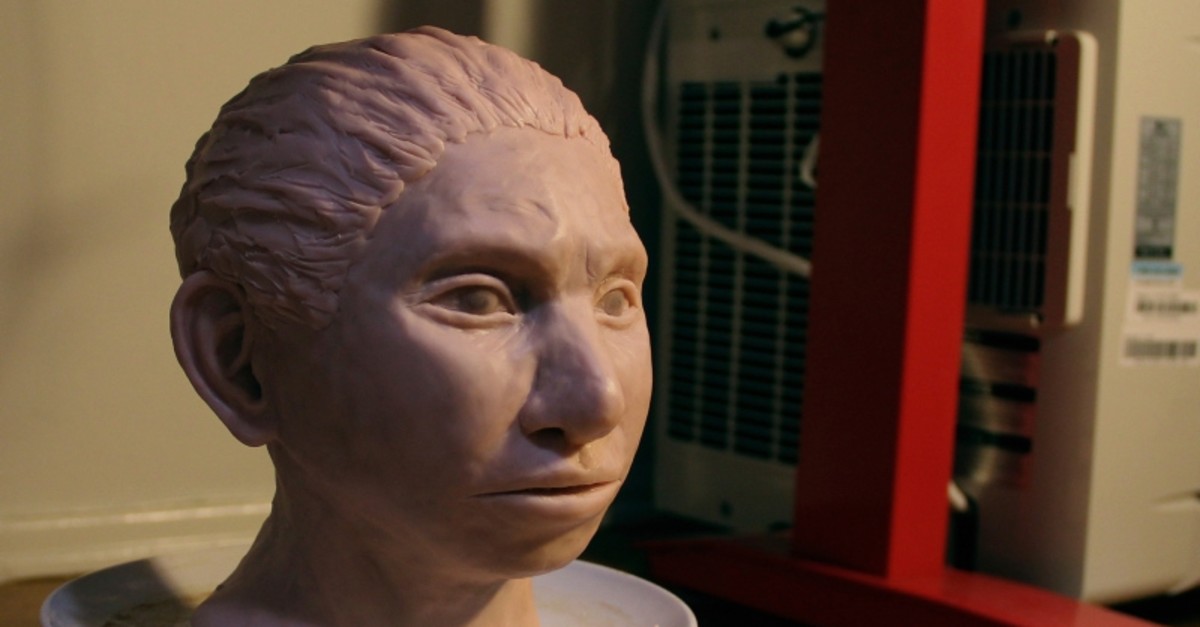 This image provided by Hebrew University in Jerusalem shows a statue reconstruction of a juvenile female Denisovan based on a skeletal profile reconstructed from ancient DNA methylation maps (AP Photo)
by Sep 20, 2019 10:26 am

We know what Neanderthals looked like. Now, thanks to ancient DNA, Israeli scientists have unveiled the appearance of another of our ancient relatives.

Very few clues exist about the lives of the Denisovans -- cousins of Neanderthals -- who went extinct around 50,000 years ago: three teeth, a pinky bone, and a lower jaw.

But that was enough for researchers at the Hebrew University in Jerusalem to draw conclusions on their appearance.

The mission was challenging, according to Professor Liran Carmel, one of two scientists leading the study.

"It is very difficult to start from DNA sequences and end up with an anatomical profile," he said.

If it were that easy, police around the world would be pulling DNA from crime scenes and drawing up profiles of the suspects, he added.

Instead, he and his team reconstructed the appearance of the Denisovans after three years of examining the patterns of chemical changes in their ancient DNA.

They then compared these motifs to those of the DNA of Neanderthals and modern man.

Using knowledge of human disorders in which genes lose their function for anatomical features, they explored what those differences might mean.

Using this method -- which Carmel described as "85 percent reliable" -- they highlighted 56 differences between the Denisovan and modern man and/or Neanderthals.

"The Denisovan is more similar to Neanderthal than to us because they are evolutionarily closer," he said.

Denisovan skulls were likely wider than those of modern humans or Neanderthals, the study found, and they probably had no chins.

Scientists hope the new technique will allow them to identify skulls discovered in China a few years ago and whose width seems to indicate they might be Denisovans.

Contemporaries of the Neanderthals, the Denisovans first came to light a decade ago.

A finger bone was unearthed a decade ago in a cave called Denisova in southern Siberia near the Mongolian border.

The tiny bone "belonged to a 13-year-old Denisovan girl, who died in the cave" around 70,000 years ago, Carmel explained.

"That pinky bone reopened a whole new chapter in the evolution of man," he said.

Denisovans and Neanderthals branched off some 400,000 to 500,000 years ago into two distinct branches, separate from the Homo Sapiens branch of modern humans.

While Neanderthals travelled from Africa to Europe and west Asia, Denisovans were present in east Asia.

Scientists don't know why these human relatives became extinct, but believe they left some of their genomes to some modern-day men.

Up to six percent of present-day Melanesians and Aboriginal Australians have Denisovan DNA, according to the Hebrew University.

They are also thought to have transmitted a gene to the Tibetans allowing them to breathe at high altitude.

The fossilized jawbone of a Denisovan found in the mountains of Tibet proves they adapted to live at high altitude at least 160,000 years ago.

The Denisovans may have made tools and even jewelry, new research published in January showed.

Scientists even found a bone fragment from a young girl born to a Denisovan father and Neanderthal mother, she said.

But, she added, the cultural relationships between the branches of the human family remain unclear.