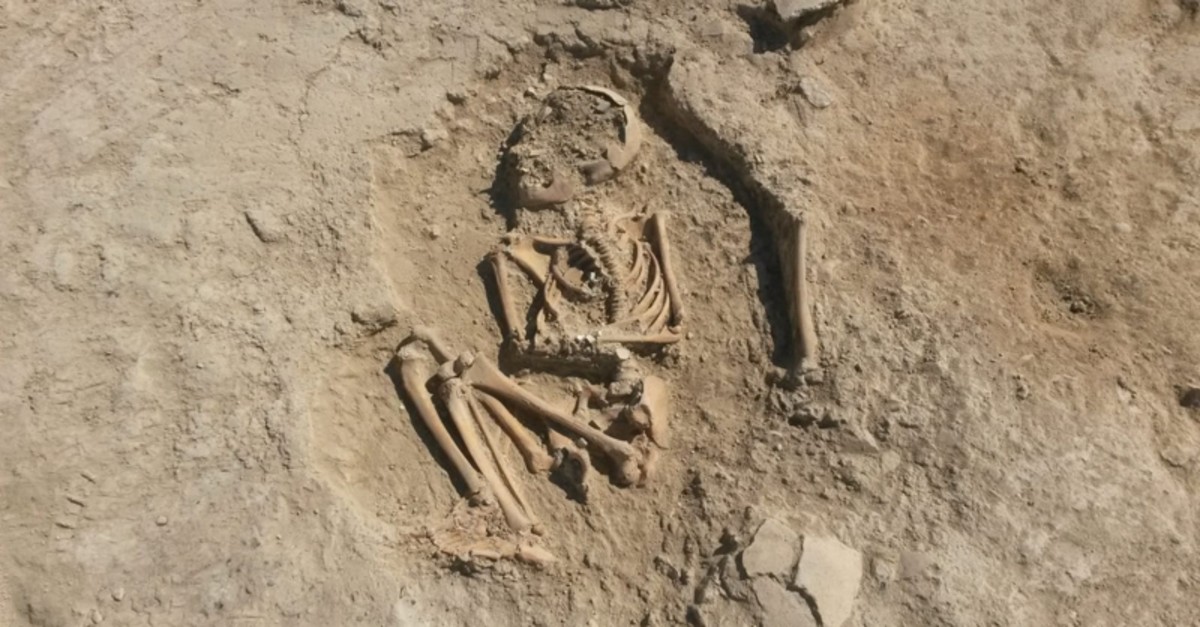 A recently unearthed skeleton in eastern Turkey, dating back to 5,700 years ago, is thought have belonged to a child, according to the head of the excavation.

The skeleton was discovered in a residence dating back to the Late Chalcolithic era during ongoing excavations in the Archaeological Site of Arslantepe, located in the eastern Malatya province.

"We found beads on the arms and neck of the child, which we have not seen before. These beads indicate that the child belonged to a noble family," excavation head Marcelle Frangipane told Anadolu Agency.

A professor at the Sapienza University of Rome, Frangipane said scientific studies at Arslantepe continue and the child is thought to have lived in 3,600-3,700 B.C.

Following expert examination by the Anthropology Department of Hacettepe University in Ankara, the skeleton will give clues about the life of the era it belonged to.

"The excavation team said that the child was 6 or 7 years old, but they needed work on it further. The child may have died due to a trauma," she added.

Frangipane also said that they are waiting for the results of the examination to discover the gender, genetic structure, age and cause of death of the child as well as the diet of era.

The four-hectare and 30-meter high archaeological mound, lying five kilometers (three miles) away from the city center, Arslantepe was accepted into the UNESCO Tentative List of World Heritage on April 15, 2014.

According to the UNESCO, Arslantepe excavations have been ongoing since 1961 on behalf of the Turkish Culture and Tourism Ministry and the Italian Archaeological Expedition of the Sapienza University of Rome.

Arslantepe — where findings from the Late Chalcolithic Era in 5000 B.C. and the Iron Age were found — was home to many civilizations, such as the Hittites, Romans and Byzantines.

During the past years' excavations, lion statues and an overturned king sculpture were unearthed, as well as the adobe palace, which has a drain rainwater infrastructure and more than 2,000 seals, revealing the structure of the first city-state in Anatolia.