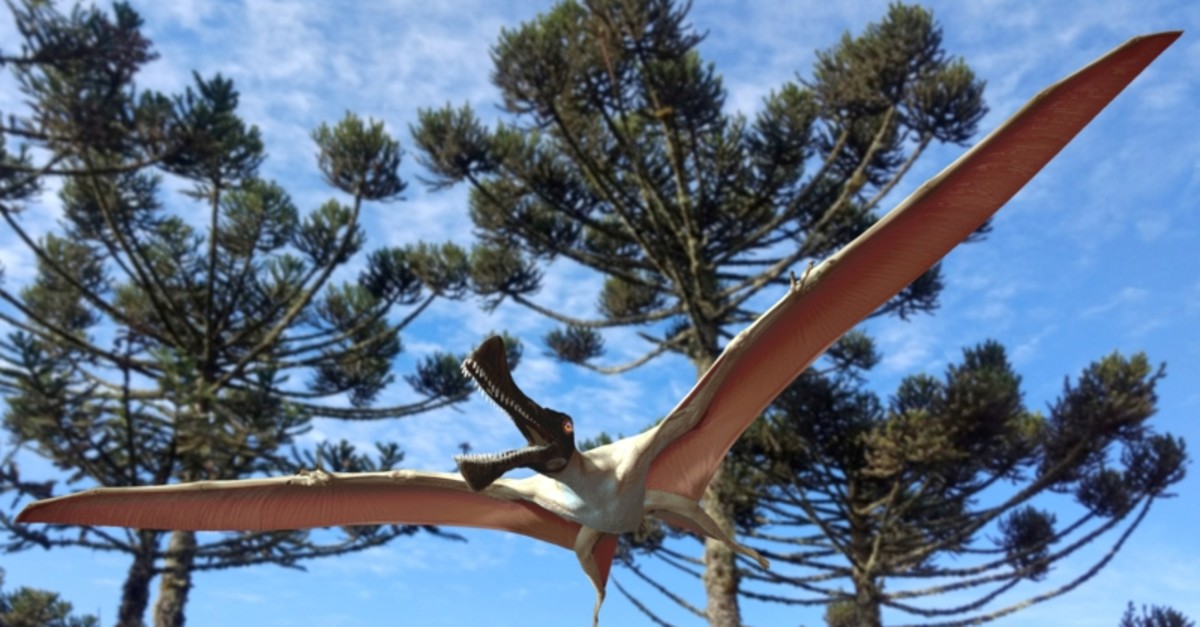 An artist's rendition of the Australian Cretaceous Period pterosaur Ferrodraco lentoni is seen in this image released Oct. 3, 2019 (Reuters Photo)
by Oct 04, 2019 8:58 pm

A winged beast dubbed the "iron dragon" soared above Australia during the age of dinosaurs, hunting fish in rivers and lakes, according to scientists who found that continent's most complete fossil representing the flying reptiles called pterosaurs.

Paleontologists on Thursday said fossils of the pterosaur, named Ferrodraco lentoni, were unearthed in the Australian state of Queensland. The creature, which lived about 96 million years ago during the Cretaceous Period, boasted a 13-foot (4-meter) wingspan, a bony crest at the tip of its upper and lower jaws and spike-shaped teeth perfect for a diet of fish.

Ferrodraco means "iron dragon," an apt name, according to the researchers.

"The 'iron dragon' seemed fitting, given that this animal would have been one of the top predators of the skies during the Cretaceous. Moreover, without the preservation of the bones in ironstone, it's unlikely that we would have recovered this fossil material in the first place," said paleontologist Adele Pentland of the Australian Age of Dinosaurs Natural History Museum, a PhD candidate at Swinburne University of Technology.

Pterosaurs, the biggest of which had a 35-foot (10.7-meter)wingspan, lived worldwide alongside the dinosaurs during the Triassic, Jurassic and Cretaceous Periods. Both were extinct after an asteroid struck Earth 66 million years ago.

"Pterosaurs are quite rare in the fossil record, and are often incomplete, as their bones are hollow and the cortical bone is quite thin," said Pentland, lead author of the research published in the journal Scientific Reports.

Until now, most of Australia's pterosaur remains have been isolated and fragmentary fossils. For Ferrodraco, the researchers discovered a partial skull, five cervical vertebrae, elements from both wings and 40 isolated teeth and tooth fragments. While it amounted to roughly 10% of its skeleton, it was enough to reveal a lot about the animal.

"This pterosaur gives us a better understanding of the pterosaurs that lived in Australia during the mid-Cretaceous," Pentland said.

Ferrodraco apparently lived in a forested environment around lake and river systems alongside the meat-eating dinosaur Australovenator and long-necked four-legged plant-eaters Savannasaurus and Diamantinasaurus, as well as crocodile relatives and other animals.

Pentland said based on an analysis of the fossil it was more closely related to pterosaurs from England than from South America even though dinosaurs and other land vertebrates at the time in Australia generally demonstrated close ties to South American lineages.