Mostar Bridge connects past and present for Bosnians, Croatians 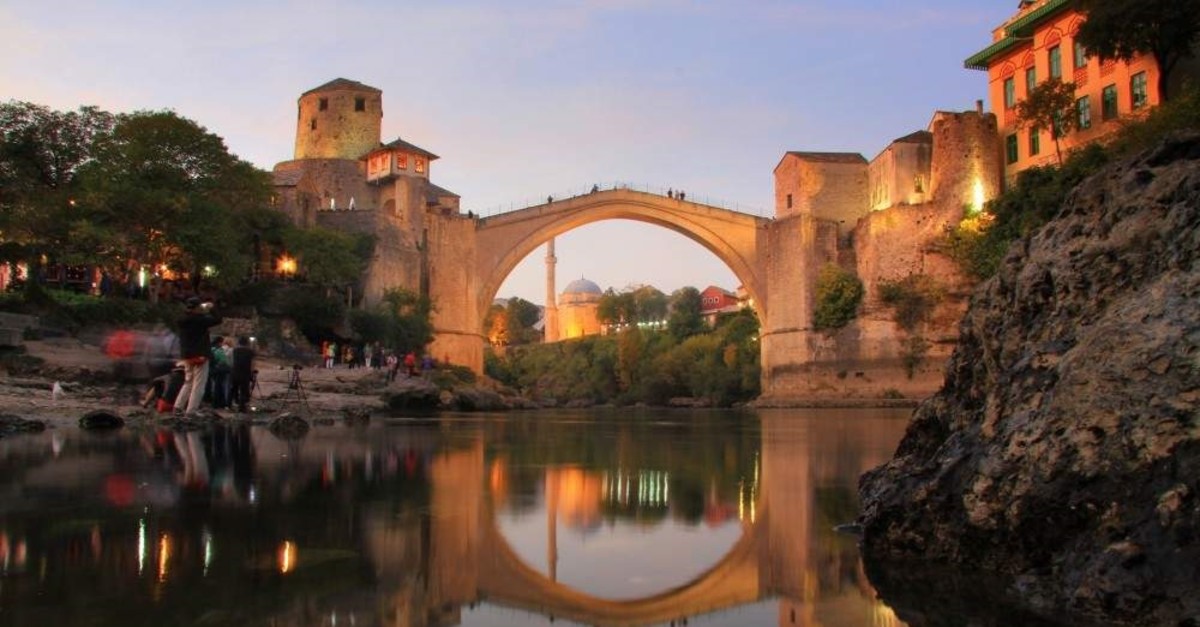 Built in the 16th century and demolished in 1993 during the Bosnian War, the Mostar Bridge was restored in 2004. (AA Photo)
by Anadolu Agency Nov 10, 2019 1:37 pm
The historic Mostar Bridge, destroyed during the 1992-1995 war in Bosnia-Herzegovina by Croat forces and rebuilt after the war, continues its mission to unite people from different races.
Unable to withstand the artillery shots launched by Croat forces on Nov. 8, 1993, the historic bridge was buried in the waters of the Neretva River on Nov. 9 of that year. The bridge unites not only the two sides of the city but also the Bosniak and Croat people who still live together. It was built in 1566 by Mimar Sinan's student Hayreddin in Mostar. The historic bridge, which connects the Bosniak and Croatian neighborhoods of the city, has also been used as a jumping platform by brave young people for centuries.
Safet Orucevic, the mayor of Mostar, both during and after the war, told Anadolu Agency (AA) he watched the collapse of the bridge from the porch of a nearby mosque with several Bosniak soldiers and said they were crying out of anger at that moment. Orucevic stressed the bridge had strategic importance in military terms during the war.
"They aimed to destroy our faith by destroying the Mostar Bridge, but this backfired. We believed even more and managed to defend our city. We have transformed the bridge from a symbol of hatred to a symbol of peace and tolerance. People of different religions living in the city before the war established close relations again with each other," said Orucevic.
Zlatko Serdarevic, a journalist who worked at Radio Mostar during the war, said the bridge of Mostar should never be forgotten to avoid similar events in the future. Croatian journalist Zoran Kresic stressed that the collapse of the bridge is the culmination of the war in Bosnia, and its restoration is proof that life defeats death, violence and all wars.
Architect Maja Popovac from Mostar pointed out that she heard of the collapse of the bridge when she was studying in Prague, the capital of the Czech Republic. "I was planning to take care of modern buildings until then, but with the collapse of the bridge, I made a decision that would change my whole life and focused on the restoration of historic buildings," said Popovac.
The Ottoman architect Hayreddin had long ago taken over the task of unifying civilizations and cultures, but the bridge was unable to withstand the heavy artillery shots launched by Croat forces on Nov. 8. Many countries did not remain silent to the collapse of the historic bridge. With the support of Turkey, it was rebuilt in accordance with the design of the original bridge in 2004.
The Mostar Bridge was added to UNESCO's World Heritage List in 2005 along with the old town of Mostar.
Last Update: Dec 20, 2019 1:34 am
RELATED TOPICS