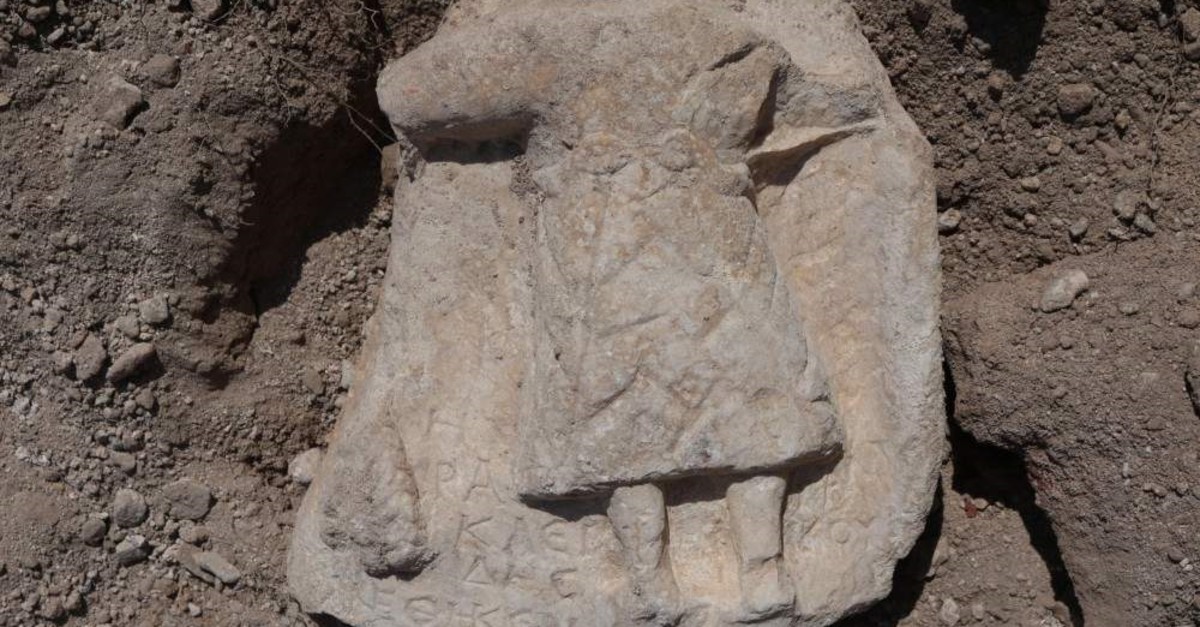 An ancient slab dating back around 1,800 years was unearthed in Turkey's northern Karabük province.

The limestone slab that had a silhouette of a woman on it was found during excavation works in the ancient city of Hadrianopolis – now located 3 kilometers east of the Eskipazar district of the northern Karabük province.

Faculty Member of the Department of Archeology of Karabük University (KBÜ) Ersin Çelikbaş said that the slab has an inscription on it reading: "Herakleides, son of Glaukos, presented this."

"The slab has a figure of a woman on it wearing a traditional dress, holding ears of wheat in her right hand and wearing a belt with a snake on her waist. Most probably, this is the goddess of the harvest and agriculture Demeter," he said.

He also said that must have been highly respected in the Hadrianopolis during the Roman period because of the intensive viticulture activities.

The birthplace of the Saint Alypius the Stylite, the ancient city of Hadrianopolis was an important site of pilgrimage for early Christians until the city lost its importance in the 8th century A.D.

So far 14 dispersed public buildings and other structures were identified in the city, which was settled during the late Hellenistic, Roman and early Byzantine periods.

These public buildings consist of two baths, two churches, a defense building, rock tombs, a theater, an arched and dome-shaped building, a monumental cult niche, a wall, villas, other monumental buildings and some cultic areas.

The floors of the churches are garnished with mosaics. These mosaics show figures of horses, elephants, deer and gryphons. Because of this, the ancient city is compared to Zeugma in southeastern Turkey, which is famous for its mosaics.

After excavation works, the site will be opened for visitors.

Believed to have lived between the 6th and 7th centuries A.D., Saint Alypius the Stylite is one of the pillar-saints of the Christian faith, who climbed on top of pillars and spent the rest of his life preaching, fasting and praying.