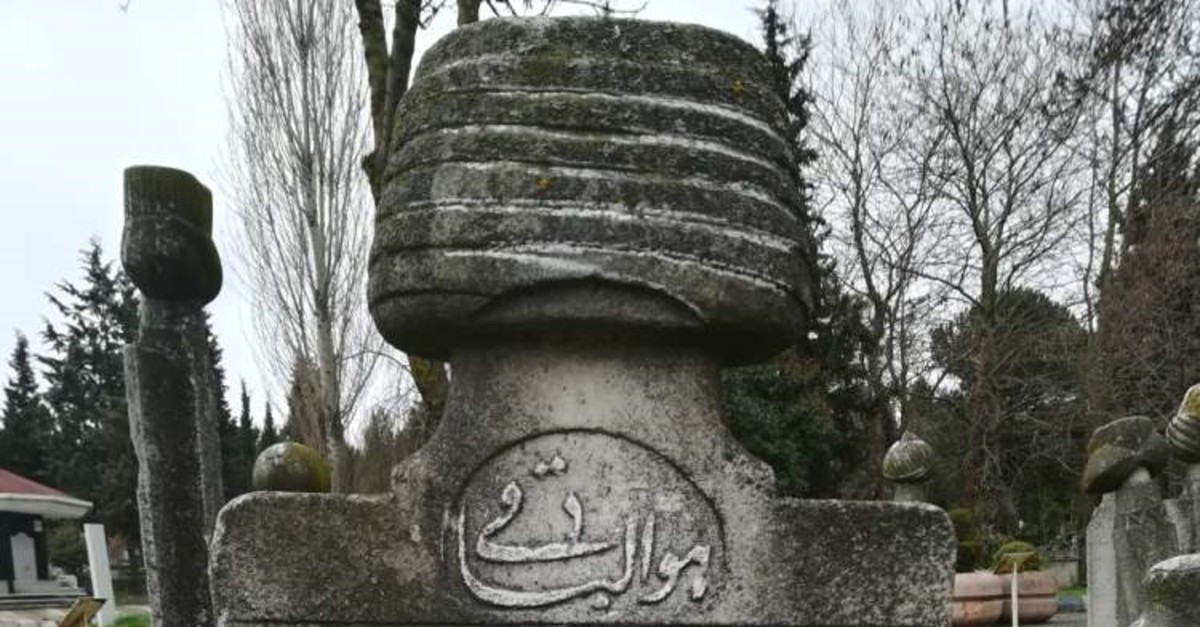 The name of Mehmed Eu015fref Efendi is written on the tombstone with the Ottoman Turkish alphabet.(AA Photo)
by Anadolu Agency Feb 11, 2020 2:36 pm

Recep Kankal, a Ph.D. student in the Department of History at Istanbul Medeniyet University, has found the tombstone of Mehmed Eşref Efendi, a late Ottoman scholar known as the "Chinese master" in the Gebze Central Cemetery in Kocaeli province, even though historical sources had said he was buried in his home district of Lüleburgaz in Kırklareli province.

Kankal, who has been working on Ottoman gravestones and inscriptions in the Gebze district in Kocaeli, found the tombstone of Eşref Efendi in the Gebze Central Cemetery two years ago. However, he waited until he found the tombstone of Efendi's mother-in-law in order to confirm the information. As a result of his research, he discovered that the scholar died in Gebze after he visited his mother-in-law and was buried in a hazire – a burial area reserved for special people especially in mosques or sufi lodges – next to her tomb.

Speaking to Anadolu Agency (AA) about his research published in a history magazine regarding the historical significance of Eşref Efendi, Kankal stated that he was from Lüleburgaz and taught at Fatih and Süleymaniye madrasahs as a dersiam – professor who taught in mosques in the Ottoman era – for many years. He also gave peace lessons during Sultan Abdülhamid II's period. Pointing out that Efendi was born in Lüleburgaz in 1841, Kankal noted that his father, Ahmed Kemali Efendi, was also a leading scholar at the time.

Eşref Efendi memorized the Quran at an early age and came to Istanbul to continue his education at the age of 15. According to Kankal, he took lessons from famous scholars of the time in Istanbul and received a diploma from them. Later, he paid homage to Ahmed Ziyaeddin Gümüşhanevi, one of the Sufi scholars of the time. He passed the exams in 1870-1871 and became a dersiam at the Fatih Mosque. Even when he was 30 years old, he gave lessons to his students day and night. In 1874-1875, he became the mudarris (professor) of Istanbul with Sheikh al-Islam (the supreme judge and highest official) Hasan Hayrullah Efendi's suggestion and Sultan's will. He was appointed as a mudarris to the Suleymaniye Madrasa after progressing in his education. He gave peace lessons in the month of Ramadan in 1888. Thus, he taught lessons in the presence of Abdülhamid II.

Efendi devoted his whole life to learning and teaching science and taught at the Fatih Mosque for 40 years.

The scholar died on March 29, 1923. Indicating that historical sources show that his tomb is in Lüleburgaz, where he was born, Kankal continued: "Although the burial site is mentioned as Lüleburgaz, there has been no clarity on this until now. As a result of my research, I found that his tomb is in Gebze. We believe that Mehmed Eşref Efendi died in Gebze after visiting his mother-in-law who was living here and was buried in the hazire next to her tomb. The epitaph on which his name is written proves that this is Mehmed Eşref Efendi's grave. And when we compare it to the information in his biography, it leaves no room for doubt. The tombstone of Mehmed Eşref Efendi was transferred to Gebze Central Cemetery long ago. There is no information in the sources about how it got here. However, this tombstone was probably located at the hazire of the Çoban Mustafa Paşa Complex."

Efendi trained students in Istanbul for many years and went to China to establish contact with the Muslims there. He also contributed to the spread of Islam. According to Kankal, Sultan Abdülhamid II sent religious scholars to countries as far away as South Africa and Japan to spread Islam in those regions and strengthen their ties with the center of the caliphate. "We know that Mehmed Eşref Efendi went to China and took part in the foundation of the Islamic University named Hamidiye and taught there. In fact, although Efendi served in Istanbul for many years and gave lectures, some sources refer to him as the 'Chinese master' for this reason," he said.