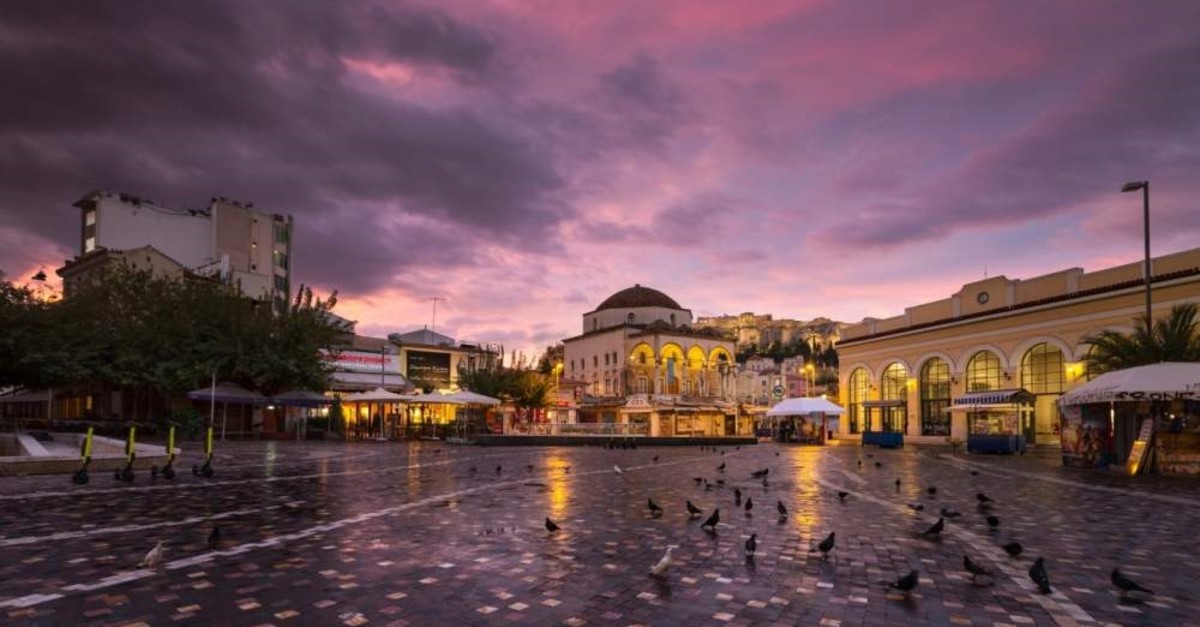 Despite being under Ottoman rule for almost 400 years, Athens has few remnants from that transformative period. As rare examples, the Fethiye and Tzisdarakis mosques, both of which are currently used as exhibition venues, are two glorious Ottoman structures still standing in the historical capital

Tracing the history of the Greek capital Athens, sites like the sacred rock of the Acropolis as well as a mixture of the Hellenistic, Roman, Byzantine and Ottoman eras come to the fore. Even though Greece was under Ottoman rule for almost four centuries, few traces of the empire's presence in the city have survived. However, perhaps a walk down the historic alleys of central Athens will give amblers a taste of the Ottoman legacy.

Among the most important remnants of the 17th century are two vintage Muslim places of worship located in Athens' historical center, Fethiye Mosque and Tzisdaraki Mosque, both of which have been repurposed as exhibition venues.

Located in the middle of the Roman Agora near the Tower of the Winds, Fethiye Mosque was built in the second half of the 17th century, reportedly around 1668-1670. To Greek residents, it was known as the Staropazaros (Wheat Market) Mosque due to its proximity to the grain bazaar in the Roman market.

In an academic article about the mosque, Machiel Kiel, a Dutch expert on Ottoman architecture, wrote that the mosque was reportedly built on the ruins of a Christian church. "The church of the Panaghiatou Staropazarou, or Church of the All Holy (Virgin Mary) of the Wheat Market-stari, here being the local Greek pronunciation of sitari (wheat), and not staro ('old' in Slavic), was said to be a Byzantine building," he wrote, adding that it was converted into a mosque due to a Muslim-Christian clash of faith.

The mosque was built according to the architectural pattern of "quatrefoil," or "cloverleaf-cross-in-square," as its wide central dome is supported by four smaller domes in a cruciform layout. According to information from the Greek Culture Ministry, inside the mosque in the center of its eastern side is a small niche, the Mihrab, oriented toward the holy city of Mecca, as is customary in Islam. Kiel said upon inspection, the mosque shows: "The marble frame of the entrance portal and the marble frames of the windows in the porch are covered with half-faded Ottoman inscriptions, pious wishes and lines of poetry. A number of them are dated."

Citing both the Muslim Hijri dating system and the Western Gregorian calendar, he added: "The oldest is from 1080 (1669-70). Others follow closely in time." These dates "strongly suggest that the name of the building is associated with the final conquest of Crete by the Ottomans," he added, referring to 1669, the year Venetian forces lost the island to the Ottomans after a prolonged siege.

After Greece gained independence in 1830, the mosque was used successively as a military prison and a barracks. Later in 1824, it was used as a school and then a military bakery starting in the late 1800s.

Now, the former mosque plays a significant role as a monument that witnessed the legacy of the Ottoman Empire.

Tzisdarakis Mosque, or Cizderiye Camii, gets its name from the word "dizdar" – "diz" being the Persian word for castle and "dar" meaning keeper/bearer – the title of the man behind the mosque. Mustafa Agha Tzisdarakis was the Ottoman governor or commander of the Fortress of Athens, a well-paid position which would enable him to engage in building projects, Kiel told AA.

The Mosque of the Lower Fountain, as it is also called, was built in 1759 in the heart of the town's market in Monastiraki Square. According to information from the Greek Culture Ministry, tradition says the building used limestone from one of the pillars of the Temple of Olympian Zeus, also known as the Olympieion, but this claim was later debunked, as the limestone actually turned out to be from the columns of Hadrian's Library on the north side of the Acropolis.

Local superstition, though, maintained that harming temples would bring deadly epidemics to the city and for his supposed offense of using the stones from Zeus' temple, Tzisdarakis had to pay a fine and was forced into exile.

According to Athens' Museum of Greek Folk Art, after Greece's independence in 1830, the building was used for various purposes until 1918, when the state decided to restore it to house a new museum.

The mosque was partially restored in 1966 so that Saud bin Abdulaziz Al Saud, the former Saudi monarch living in exile in Athens, could worship there. Nowadays, the mosque is undergoing renovation under the supervision of the Culture Ministry and is being maintained by the Museum of Greek Folk Art.

Nearly 200 years after gaining independence, Greece still has a sizeable Muslim population, including a quarter-million Muslims in metropolitan Athens. Those Muslims need a working mosque for worship, not a museum; yet Athens still lacks one – the only major European capital "to be deprived of such a religious space," in the words of Deputy Foreign Minister Ioannis Amanantidis.

Last June, after years of delays, a new mosque opened in Athens, but so far no imam has been appointed; hence, it has yet to open for worship. In December, state officials said more three months were needed to appoint new personnel and make necessary arrangements for the mosque, set to accommodate 350 worshippers. So, later this year it seems Athens' historic Ottoman mosques may finally be joined by a "living mosque," open for the Muslim faithful in the Greek capital.