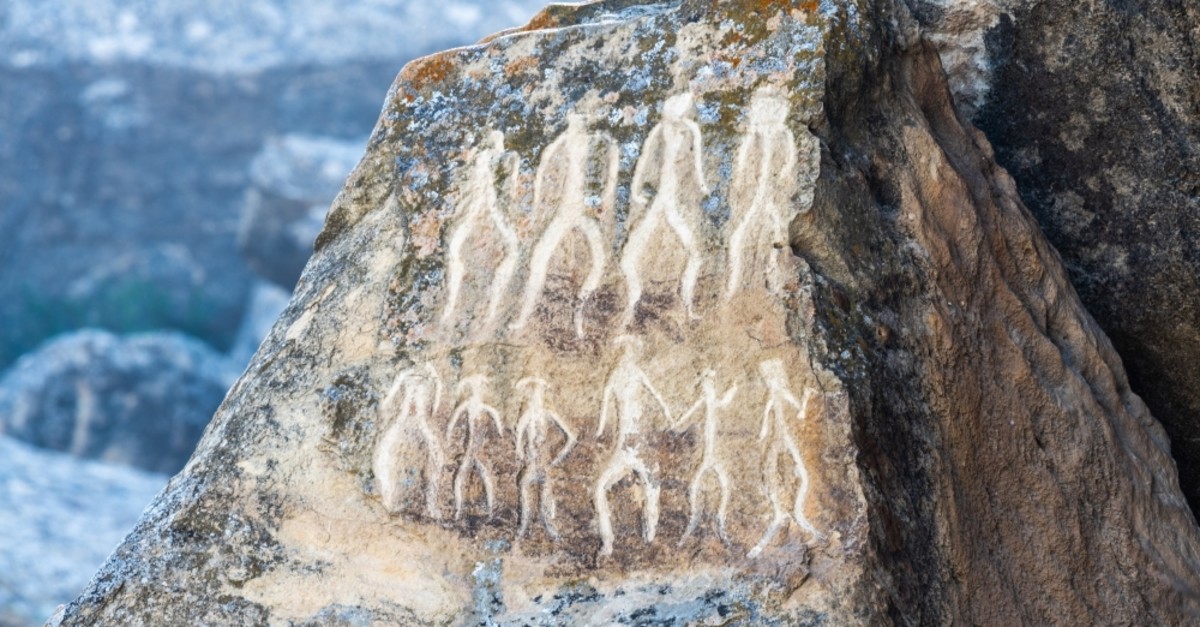 The Gobustan Rock Art Cultural Landscape is a national park in Azerbaijan that forms a bridge connecting the past and present, a reserve official told Anadolu Agency (AA) in an interview.

"Just as Azerbaijan forms an economic, cultural and historical bridge between Europe and Asia, Gobustan also stands as a bridge between ancient and modern times," said Fikrat Abdullayev, deputy director of the reserve.

Gobustan, a hill and mountain site occupying the southeast end of the Greater Caucasus mountain ridge, is about 65 kilometers (40 miles) southwest of the capital, Baku, on the western shores of the Caspian.

Abdullayev said Gobustan hosts an array of rock engravings depicting images of hunting, fauna, flora and the lifestyles of the region's ancient inhabitants. The park was declared a historic landmark of Azerbaijan in 1966 in the hope that this status would preserve the ancient carvings, relics, mud volcanoes and gas-stones of the region for future generations.

He noted that in 2007, Gobustan was declared a UNESCO World Heritage Site at the World Heritage Committee's 31st session held in Christchurch, New Zealand. The UNESCO World Heritage Center said this site offered an outstanding range of more than 6,000 rock engravings stretching back almost 40,000. "The reserve also features previously inhabited caves, the sites of old settlements and burial mounds, all reflecting an intensive human use by the inhabitants of the area over the wet period that followed the last Ice Age, from the Upper Paleolithic to the Middle Ages," according to UNESCO. UNESCO also refers to Gobustan as having "outstanding universal value for the quality and density of its rock art engravings."

"Nowadays, we can find the motifs of Gobustan rock art in various areas of art, such as sculpture and carpet weaving," he said, adding that being a full member of the International PRAT-CARP Association – a European rock art group – allowed for greater resources to preserve Gobustan in partnership with museums from across the world.

The number of tourists visiting the reserve increases every year, Abdullayev said. "The reserve has recorded over 130,000 visitors in 2019." During the busy summer season the reserve welcomes more than 1,000 tourists throughout the day, he said.

Abdullayev said visitors come from various countries around the world, including the U.S., U.K., Russia, India and further afield. Several famous Azerbaijani movies have been set in the area, he added.

Noting the first archaeological excavations in the area began in the 1930s, Abdullayev said Azerbaijani archaeologist Isak Jafarzade in 1939-1940 discovered 3,500 rock paintings, drawings and signs, as well as manmade pits and holes in rocks in Gobustan.

Since 1965, a special scientific expedition has been engaged in investigating the rock engravings of the site, where archaeological research of more than 20 dwellings and shelters, and more than 40 burial mounds were carried out, Abdullayev said.

In 2016, work started on the reserve area for creating a digital database catalog for rock arts in the Cingirdag-Yazilitapa area of Gobustan, he said, adding that as a result, all illustrated stones in this area, as well as in the newly discovered Sona rock, have been documented.

The official went on to add that in 2019, the park's research team, together with experts from the Institute of Archeology and Ethnography of the Azerbaijan National Academy of Sciences, carried out archaeological excavations along the lower slopes of the Boyukdash Mountain area, revealing a medieval village and a religious site seemingly built in the Bronze Age.

The gavaldash is an ancient tambourine, the sound of which resembles a musical instrument. Rahima Mehdiyeva, an excursion guide at Gobustan open air museum, demonstrated that by tapping on the gavaldash with small stones, one can get various clear sounds, reminiscent of a drum .

She explained that the gavaldash consisted of shell limestone and was flat, producing various sounds depending on where it was tapped and the density of the shells in the composition of the limestone. Mehdiyeva said its distinctness emerged from the emptiness and porosity of the shells.

She also stressed that the petroglyphs – images created by removing part of a rock surface by incising, pecking, carving and abrading – mostly depict oxen and women.

The larger the petroglyph, the earlier it can be dated, she said, noting that the images used to be drawn on its original shape and size during ancient times, while images of more modern ages were drawn in a schematic, scaled way.