US think tank Ricciardone's next move 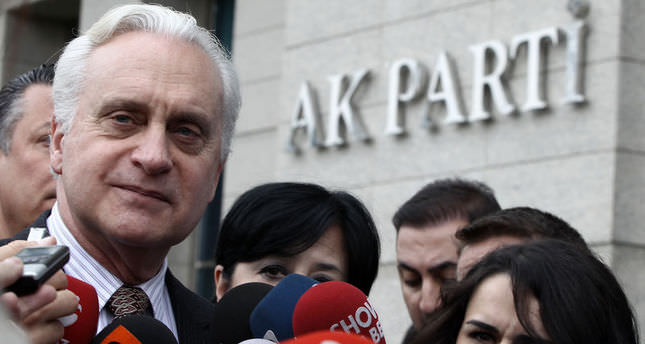 by Ragıp Soylu
Apr 24, 2014 12:00 am
WASHINGTON D.C. — U.S. Ambassador to Turkey Francis Ricciardone Jr. has been named vice president and director of a center at the prestigious Washington based think tank, the Atlantic Council.

Ricciardone will head the Rafik Hariri Center for the Middle East after he steps down as U.S. ambassador in Ankara in September. "At a crucial moment in the history of the Middle East, Ambassador Ricciardone brings to the Atlantic Council rich leadership experience from some of the world's most demanding places," said Frederick Kempe, president and CEO of the Atlantic Council.

Sources at the U.S. Embassy in Turkey confirmed Ricciardone's appointment to the Atlantic Council, though it is not known when he will quit as ambassador. Ricciardone is expected to step down sometime in the summer.

In a statement on its website, the Atlantic Council said, "During his Foreign Service career spanning more than 36 years, Ricciardone has served as ambassador also to Egypt and to the Philippines and Palau. With nearly a decade of experience in Egypt and another in Turkey, added to his years in Iran and Afghanistan, Ricciardone brings broad perspective on the larger region's contemporary events and modern history."

The Atlantic Council administration said in the statement that Ricciardone "is known for taking on leadership roles in critical global affairs, challenges and emergencies."

Ricciardone, who has been serving as U.S. Ambassador in Turkey since 2011, speaks Arabic, Turkish, French and Italian.