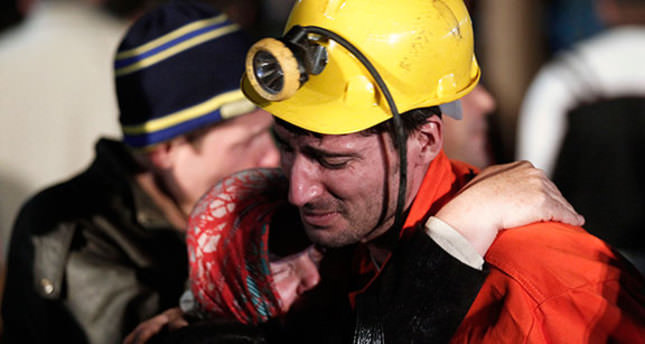 by Daily Sabah May 22, 2014 12:00 am
ISTANBUL — After a devastating coal mine accident in Soma on May 13, which caused the death of 301 miners, labor safety has been put under the microscope. The Ministry of Energy and Natural Resources together with the Ministry of Labor and Social Security are examining mining regulations in detail. Establishing a fund was put on the agenda to guarantee the independence of labor safety experts.
Thus, labor safety experts, who are paid by the companies they investigate, will be able to act independently from now on. The fact that "risky production" was not detected in the report approved by the Ministry of Labor and police department, although nine labor safety experts worked in the coal mine in Soma, mobilized the General Directory of Labor Health and Safety to launch an extensive survey of labor safety.

Dr. Fikret Sazak, a training expert in Maden-İş Union, stated that for labor safety experts to render an impartial report, they should not be paid by the company they are investigating. Having given seminars about labor health and security for hundreds of miners, Sazak noted that an autonomous fund should be established for that purpose. "Labor safety experts, who are authorized to stop the work in a certain company, should get paid from this fund, not by that company. When they work in an autonomous structure, their reports will automatically be impartial. The main problem is that the employer holds the service contracts and wages of those experts", Sazak said.

Moreover, Sabah newspaper obtained the details of the concession agreement between the General Directorate of Turkish Coal Enterprises (TKİ) and Soma Holding, operator of the mine where the accident occurred. Liabilities are listed in the agreement, which was signed by the TKİ, as the license holder, and Soma Holding, as the operator. The most critical liabilities are explained in two articles.

In the first article, the responsibility of Soma Holding in case of possible damage to Turkish Coal Enterprises is explained. "The operator (Soma Holding) is entirely responsible for any kinds of fines, damages, expenses, compensations and income shortages that the license holder (TKİ) incurs due to the operator's acts that are incompatible with Mining Law." The second article in the contract covers liability concerning labor safety, health and other rights of workers. The contract states: "An operator opens a private business on his/her behalf in the allocated area by obtaining the necessary permits from the corresponding Tax Office, Social Security Institution (SGK) and Regional Labor Directorate. ... All responsibilities about workers in the workplace related to the SGK, tax offices, labor code and other responsibilities arising from other corresponding regulations are all ascribed to the operator," which the contract refers to as a provision of responsibility. In the same article of the contract, it states, "The operator is responsible for all kinds of fines, investments, expenses, compensations and losses of income that arise from the faulty handling or failure in conducting work and transactions."
Last Update: May 22, 2014 1:42 am
RELATED TOPICS