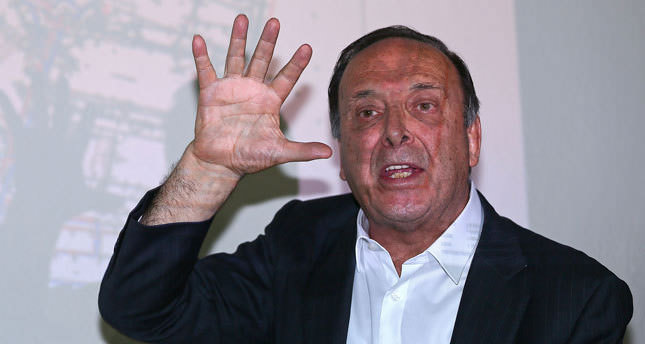 Prosecutors appealed to a higher court after a local court rejected a request to issue an arrest warrant for Alp Gürkan, owner of the mine in the western Turkish town of Soma where 301 workers were killed in a fire last week. The local bar association also filed a petition with prosecutors for the inclusion of Gürkan in the investigation

ISTANBUL — After a local court rejected a request to issue an arrest order for Alp Gürkan, owner of the Soma mine in western Turkey that left 301 miners dead in a fire last week, prosecutors conducting the investigation into the fire appealed to a higher court for an arrest warrant. The prosecutor's office also received a request from the local bar association calling for Gürkan's inclusion in the investigation.

Alp Gürkan, CEO of Soma Holding, rose to notoriety after he rejected accusations that his company's apparent negligence in implementing safety measures for miners caused the deadly fire. His son Can Gürkan, acting chairman of Soma Holding and Ramazan Doğru, general manager of the mine were among eight suspects arrested by prosecutors conducting the probe into the accident on May 19.

A local court, citing that there was no evidence showing Alp Gürkan was responsible for the accident, said there was no need to issue an arrest warrant.

If the prosecutor's appeal to a higher court for an arrest warrant is upheld, Alp Gürkan may face charges of causing reckless manslaughter that the other suspects face.

The Bar Association in Manisa, the province where the town of Soma is located, is also seeking to question Gürkan, who was last seen in the media when he held a press conference days after the accident, flanked by managers of his company including Doğru and operations manager Akın Çelik who remain imprisoned until trial.

Zeynel Balkız, head of the bar association, said at a press conference that Alp Gürkan is the founder of the company and still has responsibility. "He appeared before reporters to inform them about the accident. Though he may not be involved in operating the mine according to the official company documents, he is the one instructing his subordinates how to manage the company. He should be included in the investigation," Balkız said. He further added that the bar association will also help victims' families and survivors in the legal process to bring people responsible for the accident to justice and subsequent lawsuits. "We set up an office where volunteering lawyers are tasked with helping families. We will pursue this case until justice is served and any negligence is punished," he said.

In a related development, Minister of Labor and Social Security Faruk Çelik told reporters that the ministry inspectors properly conducted their duties in the inspection of the coal mine in Soma. "All problems, if any, were reported by our inspectors and the inspection reports are accurate in terms of any safety problems," he said. Çelik noted that inspectors' report on the mine is already being investigated by his ministry. He also said they will hold talks with survivors and victims' families about the accident and exchange information about the safety of mine as well as any possible financial assistance to families.

As the inquiry into the mining accident, which blamed overheating of coal due to negligence by company officials, is underway, the government pledged to continue efforts to support survivors and victims' families. Speaking yesterday at a joint press conference with Minister of Family and Social Policies Ayşenur İslam, Deputy Prime Minister Beşir Atalay said the government ministries carried out extensive efforts for search and rescue. He said they are now focused on the situation of victims' families. "The Ministry of Family and Social Policies and Disaster and Emergency Management Presidency (AFAD) jointly work and officials visit every family to find out their needs.
They prepare reports on their living conditions, on their financial situation and will assess how they can be aided. They interview families to learn their needs. Apart from this, AFAD set up bank accounts for donations to the families. Some nongovernmental organizations started campaigns as well and we will coordinate the aid work," he said. Atalay also noted that experts have been appointed for psychiatric support to families traumatized by the catastrophe.

He said the parliament will also set up an inquiry committee to find out the cause and consequences of the disaster.

Ayşenur İslam said at the press conference that they reached out to 289 families so far to assess their condition. She noted 432 children lost their fathers in the disaster while 255 women lost their husbands in the accident.

The government will also start a comprehensive investigation on the disaster according to Minister of Energy and Natural Resources Taner Yıldız. Yıldız accompanied Faruk Çelik and ruling AK Party's Deputy Chairman Salih Kapusuz at a meeting with 10 miners from Soma yesterday in Ankara in which miners' concerns and complaints on work safety and working conditions in the mine were discussed. Yıldız said his ministry and Ministry of Labor will form a joint group to investigate the disaster in an administrative inquiry.
RELATED TOPICS