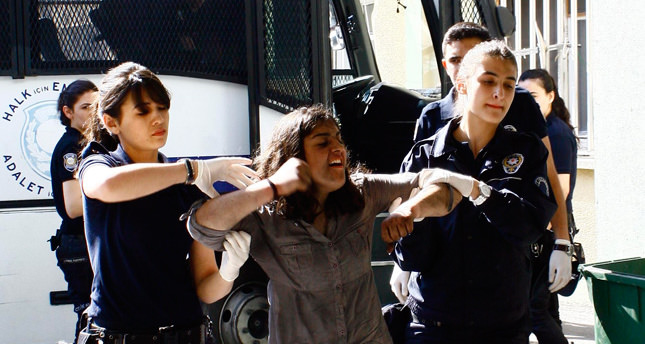 ISTANBUL — A total of 38 people were detained in dawn raids by police yesterday to capture perpetrators of last week's riots in Istanbul's Okmeydanı district that saw terrorist organizations take to the street as well as two civilian fatalities. Riot police, backed up by helicopters, carried out raids in Okmeydanı, Sancaktepe, Gazi and Alibeyköy, four districts where the terrorist organization Revolutionary People's Party-Front (DHKP-C) have supporters.

In the operations, which took place in 18 different locations, police confiscated three pistols, 46 Molotov cocktails, an undeclared number of shotguns, 500 grams of explosive materials, gas masks, as well as Molotov cocktails and firecrackers which are commonly employed by violent rioters against the police during demonstrations.

Dawn raids are the part of a wider operation against rioters and the police indicated that the number of detainees may increase. The police deployed water cannons in the sites of raids against possible protests against the operations. In the Piyalepaşa neighborhood of Okmeydanı, police officers failed to break into a four-storey building where suspects resided, but were forced to use the ladder of a fire truck to enter through the windows.

Detainees include 12 members of the terrorist organization DHKP-C .Photos of DHKP-C members have emerged after last week's riots, showing them walking on the streets with shotguns and pistols. DHKP-C, a terrorist organization whose activities severely tapered off due to its failure to find supporters in the recent years, took to exploiting rallies and protests to commit acts of terrorism. The organization claimed responsibility for the killing of Burak Can Karamanoğlu, a 22-year-old man who was killed as he was walking on an Okmeydanı street during a riots.

The police said 26 others were members of Patriotic Democratic Youth Movement (YDG-H), the youth wing of terrorist organization PKK.
Suspects include five people under the age of 18. DHKP-C is known for recruiting unemployed youth and high school dropouts to participate in riots. A statement issued by Istanbul police said some DHKP-C members attempted to burn computers and documents where information about organization's activities are stored in one of the raids on a nongovernmental organization affiliated with DHKP-C.

Suspects including several women are accused of organizing the riots that left Uğur Kurt dead, a municipality worker who was attending a funeral at a cemevi or Alevi prayer house in Okmeydanı, when he was shot in the head by a bullet. Thursday's riots also killed Ayhan Yılmaz, a 42-year-old passerby, who was heavily injured when a homemade fragmentation grenade tossed at police exploded. Yılmaz succumbed to his wounds on Friday.

An investigation was launched into the shooting, and weapons of police officers near the scene were confiscated for forensic examination.
Some police officers fired into the air to break up the rioters but it is not known whether it was the police that fired the shot or "provocateurs" among rioters. Government officials condemning the riots claimed the riots, initially started out as a protest over a mining accident in western Turkey and death of Gezi Park protester Berkin Elvan, sought to incite trouble between Sunnis and Alevis. Okmeydanı, a working-class district mostly populated by Alevi citizens, has seen similar events in past months.

Kurt's death sparked protests by several Alevi organizations on Sunday. Demonstrators claimed the government was responsible for the killing of Kurt alleging there was a campaign of injustice towards the Alevi community. His shooting is also regarded as a deliberate attempt to pit Alevi community against Sunnis, who make up majority of population in Turkey.

Government officials and leaders of several Alevi organizations warned against attempts to incite sectarian strife. Prime Minister Recep Tayyip Erdoğan extended condolences the previous day to families of both victims and pledged that those responsible for the killings would be investigated.
Last Update: May 27, 2014 2:40 am
RELATED TOPICS