Number of Gülenist officers on run reduces to nine, as eight surrender 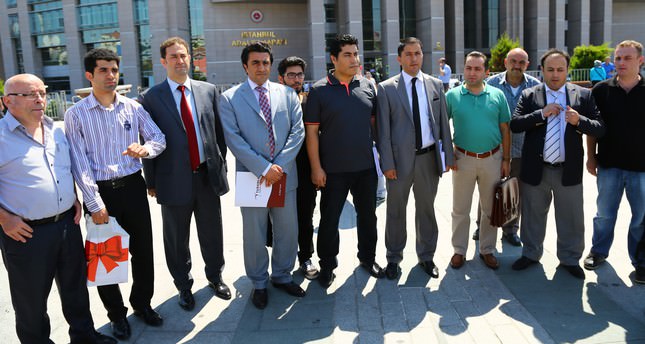 by Daily Sabah Aug 12, 2014 12:00 am
Eight out of 17 Gülen Movement-linked police officers, who are accused of illegal wiretapping activities for espionage purposes, surrendered to police on Tuesday with the whereabouts of the other nine suspects still unknown.

A total of 39 Gülenist officers have recently been sent to prison for illegal wiretapping and espionage claims, and eight others were released pending trial.

As the investigation into the Gülen Movement – led by the U.S.-based, controversial imam Fethullah Gülen – deepens, various reports on wiretapping actives are being undertaken by the Interior Ministry, prosecutors and telecom watchdogs.

An expert report sent to the Gölbaşı Prosecutor's Office in Ankara showed that President-elect Recep Tayyip Erdoğan's encrypted telephone was illegally wiretapped by members of the Gülen Movement for 21 consecutive months.

The expert report, during an investigation at the Telecommunication Authority (TİB) records, found that among officials who were wiretapped were Chief of General Staff Gen. Necdet Özel, National Intelligence Organization (MİT) Chairman Hakan Fidan, Deputy Prime Minister Bülent Arınç, Deputy Prime Minister Ali Babacan, Interior Minister Efkan Ala – who was the prime ministry undersecretary at the time – Foreign Minister Ahmet Davutoğlu, Energy Minister Taner Yıldız and Constitutional Court President Haşim Kılıç. Permissions for wiretapping were issued in quarterly intervals. The expertise report will be used as evidence against the espionage activities of police officers and other officials linked to the Gülen Movement.

Turkish government officials have continuously expressed their determination to continue to lawfully fight against the Gülen Movement, whose followers are accused of infiltrating state institutions to gain control of state mechanisms, and illegal wiretapping, forgery of official documents and spying.
Last Update: Aug 13, 2014 10:57 am
RELATED TOPICS