Some Gezi Protesters may face charges of coup attempt 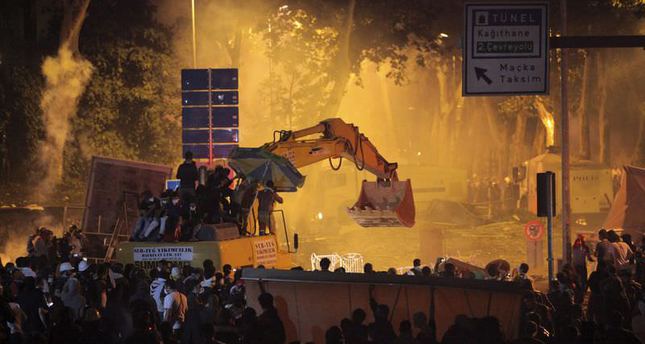 by Daily Sabah Sep 17, 2014 12:00 am
36 suspects including members of Socialist Democrat Party (SDP) and Socialist Platform of the Oppressed (ESP) might be accused of attempting to topple government during Gezi Part Protests --that began as a sit-in demonstrations and grew into anti-government protests of marginal groups--, after the probe of the prosecutor's office finalize.

35 members of Çarşı —the fan group of Beşiktaş Football Club-- including the group's leaders face charges of attempting to overthrow the government during last year's Gezi Park protests by carrying out a smear campaign against the government and provoking the public via social media and violent activities. As prosecutor's office decided to re-investigate the indictment of the case filed by the prosecutor Muammer Akkaş in Jan, 2014, a possibility that 36 suspects who participated in the protests might face similar charges has emerged.

Various Gezi indictments were prepared following the protests by the prosecutors accusing some protestors of coup attempt. Some of the protestors were arrested in June of last year but later released upon appeal pending trial.

The suspects do not yet face charges of toppling the government but if the prosecutor's office finds tangible evidence after probing the indictment in question, the suspects will be subjected to such charges as well in an additional indictment which will be sent to Istanbul 2nd High Criminal Court where they will stand trial for coup attempt like the Çarşı members.

Prosecutors seek aggravated life sentences for some of the members of Çarşı submitting the court an indictment that included the telephone conversation logs as proof for the group members attempt to overthrow the government during the protests. The logs read: "I don't give a damn about the department store or the trees in Gezi Park, the revolution has begun' and 'we should assault to the police fiercely, someone's death in the clashes might spark outrage in the public'.