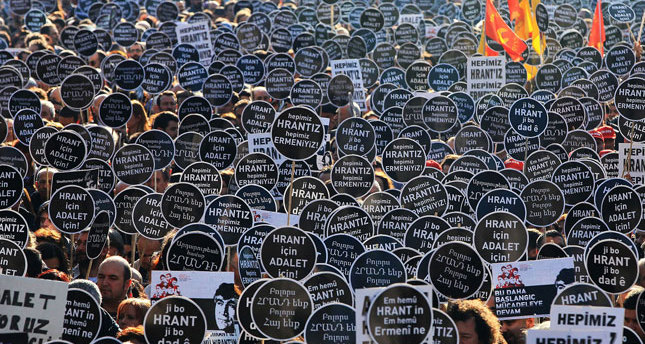 The Justice Ministry has annulled the verdict of nonsuit for nine officials, paving the way for their trial for failing to prevent the 2007 murder of Hrant Dink.

The Bakırköy Heavy Criminal Court of Istanbul had earlier ruled for a trial of the officials, while the Chief Prosecutor's Office objected, citing "lack of grounds for legal action." The ministry rejected the prosecutor's office plea.

Hrant Dink, editor-in-chief of the Turkish daily Agos, was known for his staunch stance on the thorny issue of the 1915 incidents that Armenia terms as the "genocide of Armenians in Turkey." Dink had called for a public debate over the issue and called for reconciliation between Turks and Armenians on the issue. But his definition of the deaths during a mass exodus as "genocide" angered nationalists, leading to Dink receiving death threats.

He was murdered outside his office by 17-year-old Ogün Samast on Jan.19, 2007. Treatment of the suspect by police sparked controversy after photos of police officers posing with Samast after the murder against the backdrop of a Turkish flag surfaced. A number of other suspects, who were accused of masterminding the murder, were arrested and sentenced to various prison terms.

Further investigation showed prosecutors who worked on the case ignored serious allegations into the involvement of top police officers in the murder. Those prosecutors are accused of having ties with the Gülen Movement, a group whose widespread infiltration of the judiciary and police enabled them to influence cases or fabricate them for their own interests. Prosecutors allegedly dismissed allegations about Ramazan Akyürek and Ali Fuat Yılmazer, two senior police officers linked to the Gülen Movement. Akyürek and Yılmazer are accused of helping the murder suspects.

Sabri Uzun, who was head of the National Police Intelligence Department, had claimed his subordinates hid tip-offs warning against the murder of Dink. Questioned about the murder, Uzun has said Yılmazer hid from him an intelligence report regarding a plot to kill Dink.

Yılmazer was arrested in September for a separate case involving illegal wiretapping. Inspectors from the Prime Ministry Inspection Board, which carried out a separate investigation on the murder on the instruction of the Prime Ministry, told police that Yılmazer and Akyürek had threatened them and demanded inspectors to dismiss the case.