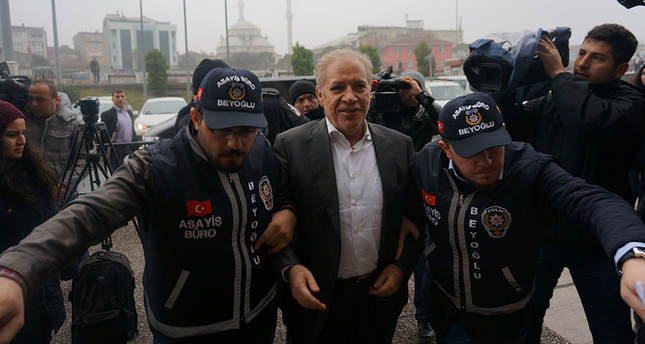 by Daily Sabah Dec 08, 2014 12:00 am
Former deputy Feyzi İşbaşaran was arrested on Monday in Istanbul due to death threats against President Recep Tayyip Erdoğan.

After his arrival from London, İşbaşaran was detained by police. Police were informed on the whereabouts of the former deputy, setting up a stakeout in front of a hotel he was staying in. As he was seen exiting officers quickly took action arresting the former deputy. The police have taken İşbaşaran to court where he will be tried.

İşbaşaran was arrested for sending death threats via Twitter to President Recep Tayyip Erdoğan and his wife Emine Erdoğan. The former deputy said that Erdoğan "definitely deserves death" as he was taken in to custody at 06:00 a.m., along with numerous tweets insulting Erdoğan.

His tweets regarding Erdoğan were evaluated under the offense of "publicly insulting the president."

İşbaşaran had earlier threatened Armenian intellectual, Senior Advisor to Turkish Prime Minister and Daily Sabah columnist Etyen Mahçupyan, saying he is an "agent" and must be "taken down."

"Armenians would want peace when he [Mahçupyan] is killed. He is not Hrant!" İşbaşaran tweeted, giving reference to Hrant Dink, an Armenian journalist whose murder in 2007 led to a public outcry. İşbaşaran also insulted and threatened a disagreeing user on Twitter.

A lawyer attacked İşbaşaran while he was being brought to the court, while another group protested against his threats.

İşbaşaran was a former deputy of the eastern province Elazığ for governing AK Party and center-right ANAP.

His bitter dispute with a police officer in 2009, including swears and threats, were taped and sent to media outlets as well as to the prime minister of the time, Recep Tayyip Erdoğan. He resigned from Ak Party in 2009 after the party administration sent him to the disciplinary committee for expulsion.

Prior to this incident, İşbaşaran claimed that there were "groups" within the police, conspiring against each other and against the government to start a dispute with the Turkish General Staff.