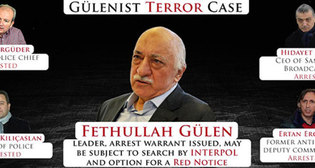 "The suspect Fethullah Gulen, the leader of a criminal organization known as "Hizmet" movement, which was structured unlawfully in the economic and bureaucratic institutions, has not returned to the country since he left in 1998," the request said.

The official request also states that sufficient solid evidence has been discovered, proving Gülen's crimes in accordance with the criminal penal code and added that it is currently impossible to reach Gülen since he lives overseas.

The court's decision enables the judge to issue a Red Notice and potentially prompt a search by Interpol since Gülen currently resides in Pennsylvania, United States in self-imposed exile and cannot directly be reached by Turkish officials.

The Gülen Movement, led by Fethullah Gülen, has over 140 private schools and charity organizations around the world including the U.S., Europe, Asia and Africa. It has been accused of infiltrating state institutions to gain control of state mechanisms, illegal wiretapping, forgery of official documents and spying. According to the written statement sent to the court for the issue of the arrest warrant, it was written that the Gülen movement has taken steps in discord of the laws and regulations of media, economy and bureaucracy.

A treaty entitled "The Treaty on Extradition and mutual assistance in criminal matters between the United States and the Republic of Turkey" was signed in 1979 and is effective as of January 1, 1981.This treaty states that , "The Contracting Parties undertake to surrender to each other, in accordance with the provisions and conditions laid down in this Treaty, all persons who are found within the territory of the Requested Party and who are being prosecuted for or have been charged with an offense, or convicted of an offense, or are sought by the other Party for the enforcement of a judicially pronounced penalty for an offense committed within the territory of the Requesting Party."

In a recent press statement, Prime Minister Ahmet Davutoğlu had signalled that a Red Notice may be issued for Gülen and noted that all necessary legal measures would be taken in the case that judicial authorities believe a crime has been committed.

Four Gülenist suspects, including Hidayet Karaca and former police chief Tufan Ergüder, have been arrested on Friday as part of the December 14 Tahşiye Operation, while eight Gülenist suspects including Ekrem Dumanlı -- the editor-in-chief of the Zaman daily -- have been released.