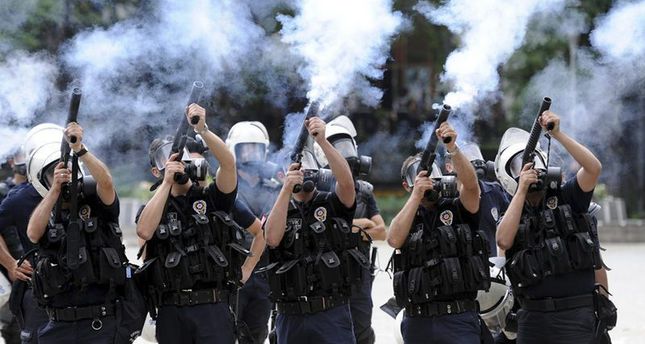 by Daily Sabah Dec 23, 2014 12:00 am
Ramazan Emekli, a former Istanbul deputy police chief linked to the shady Gülen Movement, faces an investigation into the maltreatment of Gezi Park demonstrators, which allegedly led to the transformation of protests into riots.

The Istanbul Governorate has approved the launch of an investigation into Ramazan Emekli, a former deputy police director in Istanbul, after the Istanbul chief prosecutor's office found him at fault for turning peaceful protests at Istanbul's Gezi Park into all-out riots. Emekli is reportedly the official who ordered the burning of tents, set up at Gezi Park by demonstrators who had been protesting the redevelopment of the site in central Istanbul.

Turkish daily Star claimed Emekli and other police officers were linked to the "parallel structure," the name attributed to members of law enforcement and judiciary loyal to the controversial Gülen Movement.

An investigation found those police officers deliberately kept 715 people detained in connection with protests in police buses for hours. They are also accused of disproportionate use of force by firing tear gas and water cannons at close range. Investigators will now look into allegations of whether the police officers with Gülenist ties, who are accused of detention without any legal grounds and evidence, acted with intent to further fuel the riots.

Emekli was suspended as deputy police chief after a major reshuffle in the police directorate last year in a move to weed out Gülenist infiltrators in the force. Gülenists are accused of attempting to overthrow the government by an anti-graft probe targeting people close to the ruling Justice and Development Party (AK Party) and the sons of ministers. Their plan to topple the government, by eventually linking the prime minister to the probe, was thwarted and subsequent investigations discovered that Gülenists were engaged in illegal wiretapping of government officials.

A report prepared by the Interior Ministry inspectors released earlier this year depicted the Gezi Park protests as an "insurrection" and defended police intervention as legitimate. However, the report acknowledges instances of disproportionate use of force.

According to the report, riot police prevented a brawl between municipality officials and protesters who set up tents in Gezi Park but protesters continued hurling stones and bottles at municipal crews. It added that police had to fire tear gas and water cannons, "sometimes excessively," against "overreacting" crowds in order to evacuate the park. The report links the ensuing violent riots to the burning of tents by municipality officials to prevent a sit-in.

The report notes that police did not overstep their responsibility but the number of people involved and difficulty in distinguishing between peaceful protesters and violent groups posed a challenge for security forces and "police had to resort to teargas and water cannons." The report added that the police intervention was "inadequate" in the face of the masses, and the "entangled nature" of radical and peaceful groups prevented police from making detentions.

According to a report by the Foundation for Political, Economic and Social Research (SETA), 49.1 percent of demonstrators joined the protests after facing police brutality. Prior to this stage, the protest was relatively small in scale and evolved around protecting the trees and environment in Gezi Park, but the tear gas provoked many from far-left groups to join the cause. As they proceeded, anarchists and terrorist organizations such as the Revolutionary People's Liberation Party-Front (DHKP-C) got involved in the riots, attacking police and damaging public and private property.