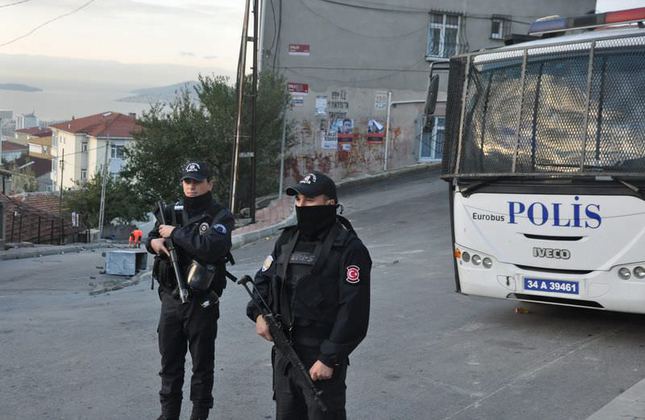 by Yusuf Ziya Durmuş Jan 05, 2015 12:00 am
Turkish security forces have stepped up anti-terror efforts in Istanbul after a member of the terrorist organization, the Revolutionary People's Liberation Party-Front (DHKP-C), attempted to carry out an armed attack on the city's Dolmabahçe Palace last week.

In operations following the attack, Turkish anti-terror police and gendarmerie troops captured a number of DHKP-C members in the city, including a cousin of the palace-attack suspect Fırat Özçelik.

S.Ö., whose initials were revealed by security forces, is known as a former leader of the DHKP-C in the southern Turkish province of Hatay, located on the Turkish-Syrian border. The 36-year-old cousin of Özçelik was captured in the Istanbul house she was hiding in on Sunday. Security officials said S.Ö. was previously sentenced to 40 months in prison for spreading the propaganda of the terrorist organization, and had undergone combat training in Syria in the past.

The Syrian regime is known for harboring militants linked to terrorist organizations like the DHKP-C, including Mihraç Ural, a top militant from Turkey's People's Liberation Party-Front (THKP-C), a predecessor of the DHKP-C, and the alleged mastermind of the car bombings that took place in Hatay in 2013.

S.Ö. was planning attacks against Turkish security forces when she was captured. Elsewhere in Istanbul, four DHKP-C militants were captured in the Gülsuyu district on the Asian side of the city as they were driving in a car found to contain four automatic rifles, five pistols and ski masks. Gülsuyu is among the working-class neighborhoods of Istanbul where the DHKP-C recruit members, especially from among the disillusioned youth.
Last Update: Jan 05, 2015 3:41 pm
RELATED TOPICS