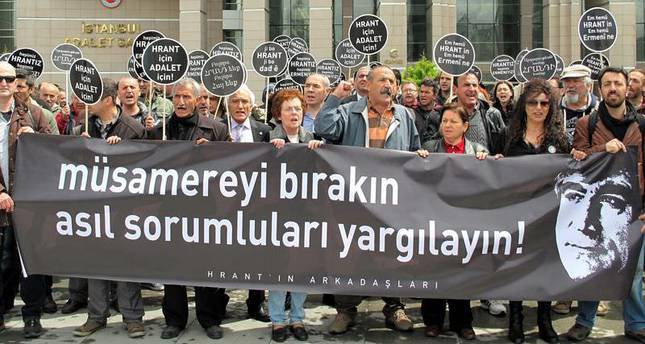 by Daily Sabah Jan 16, 2015 12:00 am
An arrest warrant has been issued for Cizre Police Chief Ercan Demir on Friday as part of ongoing investigation into the murder of Turkish Armenian journalist Hrant Dink.

Demir, who was a police officer in Trabzon's branch of the Turkish National Police at the time of the 2007 murder of Hrant Dink, provided a statement to investigating Prosecutor Gökalp Kökçü on Monday.

Demir has been charged with "failing to carry out an effective probe", "causing death by negligence."

Two more officers Özkan Mumcu and Muhittin Zenit were arrested in the investigation of the murder on Tuesday after an Istanbul court accepted the prosecutor's request for an arrest.

Dink was shot dead in broad daylight by a teenage ultranationalist outside the offices of his bilingual Agos newspaper, sending shockwaves through Turkey.

Ogün Samast, then a 17-year-old jobless high-school dropout, confessed to the murder and was sentenced to almost 23 years in jail in 2011.

Turkey's top court in July ruled that the investigation into the killing had been flawed, paving the way for the trial of state officials who could be implicated in the murder.

Seven other officials, including then Istanbul police chief, are currently on trial on charges of negligence.
Last Update: Jan 18, 2015 10:53 am
RELATED TOPICS