Dink remembered while probe closes in on culprits 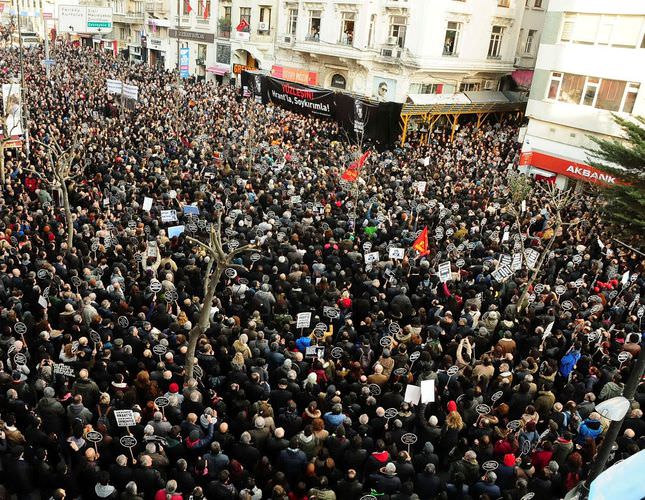 by Yusuf Ziya Durmuş Jan 19, 2015 12:00 am
Hrant Dink, the Turkish-Armenian journalist killed in 2007, has been commemorated on the eighth anniversary of his death, while a renewed inquiry closes in on police officers accused of having a role in his murder.

People gathered to remember Hrant Dink, editor-in-chief of Agos newspaper, who was shot dead by a teenager on January 19, 2007 outside his office. The commemoration comes at a time when the inquiry into the role played in the murder plot by police and other public officials reportedly linked to the shady Gülen Movement deepens.

In Istanbul, a crowd converged in the central district of Taksim and marched to the headquarters of Agos, where a ceremony was held at the spot the 53-year-old journalist was gunned down. The slain journalist's wife, Rakel Dink, human rights activists and lawmakers joined the crowd carrying banners "We are all Hrant, we are all Armenians," "We are here ahparig [brother in Armenian]" and "We will not forget."

Rakel Dink, choked with tears, laid daisies on the spot where her husband was shot and the crowd observed one minute's silence in memory of Dink.

Prominent poet Murathan Mungan, made a speech there on behalf of Friends of Hrant, a group established in memory of Dink. "This country lost a valuable son and an important journalist when Hrant Dink died" he told the crowd gathered outside the Agos newspaper offices.

Hrant Dink drew the ire of hardline nationalists during his lifetime, as he was one of the most outspoken voices calling for a debate to start in on the controversial Armenian "genocide" issue. He received numerous death threats before his murder, and faced several lawsuits for "denigrating Turkishness," an act punishable by prison terms for his articles and editorials on the mass deaths of Armenians in 1915. The deaths are not officially recognized as genocide – as Armenia calls it – by Turkey, although the widespread deaths during deportation of the community from Ottoman territories are acknowledged.

The journalist had complained of being misunderstood when he called Turkey to confront its past and Armenians to adopt a friendly rhetoric toward Turkey to thaw the frozen relations between Armenia and Turkey by shedding the "Armenian identity they built on genocide." This "misunderstanding" led to death threats from ultranationalists and defamation campaigns from fellow journalists. His balanced stance on the matter, however, made him a target of both nationalists in his country and of the Armenian diaspora who claimed he was a Turkish spy.

The role of police officers and public officials in the plot to kill the Turkish-Armenian journalist recently came into light as a new investigation focuses on an alleged Gülenist cover-up of the murder. Ercan Demir, who currently serves as police chief of the southeastern Turkish town of Cizre, turned himself in to Ankara yesterday, after a court accepted an arrest warrant for him. Demir was police chief at the intelligence unit of Turkish National Police's Trabzon branch at the time of the murder. He was recently appointed as police chief of Cizre, but suspended after the court issued an arrest warrant for him. Ogün Samast, the teenager convicted for Dink's murder, hails from Trabzon, a city in northern Turkey, and an earlier investigation discovered that police officers in Trabzon were aware of the murder plot beforehand.

Gökalp Kökçü, the prosecutor assigned to the case after previous prosecutors, and allegedly linked to the controversial Gülen Movement, dismissed the accusations toward public officials, and instead sought an arrest warrant for the police intelligence officers tied to the case. Police officers face accusations of causing death by negligence and misconduct, for ignoring intelligence regarding the planned assassination. On January 13, Muhittin Zenit and Özkan Mumcu, two members of the Turkish National Police's intelligence department, were arrested on those charges. Zenit and Mumcu were working at the police intelligence branch in Trabzon.

Turkey's Star daily has reported that a new probe on the murder revealed that a large amount of evidence and numerous allegations were dismissed by the prosecutors who had handled the case in the past. Those included the dismissal of allegations about Ramazan Akyürek and Ali Fuat Yılmazer, two top police chiefs allegedly loyal to the Gülen Movement, who were accused of helping the murder suspects.

The Chief Prosecutor's Office for Istanbul has relaunched the investigation into the murder after the case was handed to the office following the abolition of a specially authorized prosecutor's office. Specially authorized prosecutors, most of them accused of being affiliates of the Gülen Movement, reportedly committed misconduct and negligence while investigating the murder.

Muammer Akkaş was the last investigator of the murder who assumed the case in 2010. Akkaş, the chief prosecutor in the infamous December 25 probe that sought to discredit the government by implicating those close to the government and AK Party with charges of corruption, deliberately stalled the case according to media reports.

Ramazan Akyürek, the former director of the Turkish National Police's intelligence department and Ali Fuat Yılmazer, deputy director of Istanbul's police intelligence department were accused of protecting the murder suspects. Both top police officers are reportedly linked to Gülen. Akyürek and Yılmazer were defended by Gülenist media outlets as "heroes" when they were questioned in separate cases. Several newspapers linked to the movement ignored the interrogation of Ramazan Akyürek in their articles about the anniversary of Hrant Dink's murder, while they piled blame on several other members of law enforcement accused of involvement.

Akkaş and other prosecutors did not investigate the allegations that Akyürek deleted electronic and telephone logs within the National Police that would help to shed light on the murder, according to reports in the Turkish media. The prosecutors also did not investigate similar allegations towards Ali Fuat Yılmazer. Security camera footage at the time of the murder was not properly examined, and the role of police intelligence officials and gendarmerie officers both in Istanbul and in the northern province of Trabzon, where the suspects hailed from and where they allegedly planned the murder, were not investigated. The prosecutors reportedly did not look into the phone conversation logs of the suspects well enough to establish their connection with each other and other likely suspects, and officers at the Istanbul police department hid evidence regarding the suspects' connections. The prosecutors are also accused of not investigating contradictions in the testimonies of murder suspects.

Ramazan Akyürek was suspended from duty in March after an investigation found that he was involved in leaks and destroying confidential documents. Akyürek was head of the police intelligence department at the time Dink was shot dead. An internal investigation accused Akyürek of erasing information related to past cases from the intelligence department's computers, as well as leaking confidential documents. Those past cases date back to Akyürek's tenure during the Dink murder.

Erhan Tuncel, a suspect tried on charges of masterminding the Dink murder, accused Akyürek of obstructing the investigation into the murder. Tuncel was hired as an informant while Akyürek was the police chief of Trabzon in 2004.

When questioned by prosecutors on the intelligence regarding the murder plot, Akyürek denied involvement in a cover-up, and claimed he did not remember the details about an intelligence report pointing to a planned murder, though he admitted that his subordinates presented him with the report.

Ali Fuat Yılmazer was accused of deliberately ignoring tip-offs about the murder in a report prepared by inspectors from the prime ministry. Yılmazer worked on many cases while serving in the police intelligence, including Operation Sledgehammer (Balyoz), Ergenekon and Oda TV, whose defendants claimed they were imprisoned based on fabricated evidence and following their opposition to the Gülenist infiltration of state agencies. Yılmazer is currently in prison for charges relating to an illegal wiretapping case.