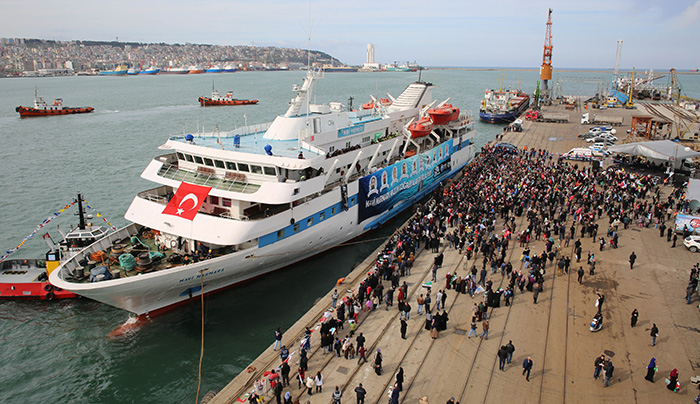 by Anadolu Agency Mar 12, 2015 12:00 am
Istanbul's 7th High Criminal Court has ordered a fresh examination of the Turkish aid ship Mavi Marmara, which was at the center of a 2010 incident where Israeli soldiers killed nine people.

According to a statement released by the court board yesterday, the craft will be examined by a police-appointed expert, victims and the court board on May 25 in Istanbul.

In May 2010, Israeli commandos killed eight Turkish nationals and an American of Turkish origin in a raid on the Mavi Marmara, which was part of the Gaza Freedom Flotilla. Another person died in a Turkish hospital in 2014 after being in coma for almost four years.

The convoy was led and established by the Turkish aid agency Humanitarian Aid Foundation (IHH), and was carrying humanitarian aid and construction materials for Palestinians in the Gaza Strip, which was under an Israeli blockade at the time.

Istanbul's public prosecutor's office demanded that the suspects be sentenced to prison terms amounting to a total of 18,032 years.

IHH had appealed in January 2014 against an International Criminal Court decision not to investigate the deadly Israeli raid on the Mavi Marmara.

However, in November, the court announced it would not investigate the maritime incident between pro-Palestinian demonstrators and Israeli forces due to a lack of "sufficient gravity."
Last Update: Mar 12, 2015 5:46 pm
RELATED TOPICS