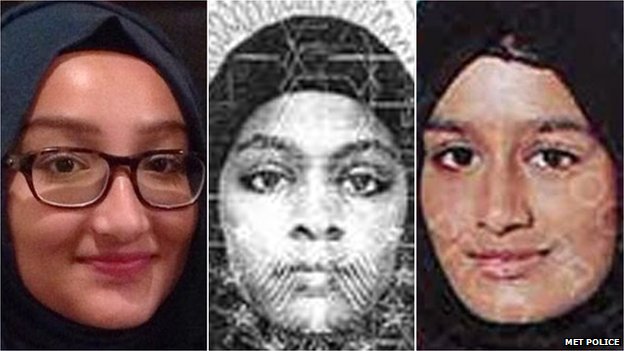 While Canada remains quiet on reports that a spy allegedly working for its intelligence service helped smuggle three British girls into Syria via Turkey to join ISIS, Turkey's A Haber TV broadcast footage of the man with the girls as he arranged their trip

A video has been released by Turkish A Haber news channel showing the suspected spy working for the Canadian intelligence agency helping British girls join ISIS.

More details emerged on Friday about the Syrian national who arranged for the three British girls to cross into Syria through the Turkish border to join the Islamic State of Iraq and al-Sham (ISIS). A Haber's report based on Turkish security sources revealed connections between the spy, British recruits of ISIS and likely the Canadian intelligence service. The Turkish government initially refused to identify the person's nationality but Foreign Minister Mevlüt Çavuşoğlu announced on Friday that the person was "a Syrian national." Çavuşoğlu was the first to break the news on Thursday when he said in a televised interview that a person was caught in connection with smuggling Shamima Begum, 15, Amira Abase, 15, and Kadiza Sultana, 16, the three British girls who left their London homes in early February, into Syria.

He went on to say that the person was working for the intelligence service of a country "that is a member of the international coalition" against ISIS, referring to U.S.-led forces carrying out air strikes against the armed group. He refrained from naming the country, other than stating that it is "not the United States, nor a European Union country." The coalition also includes several Arab countries as well as Australia and Canada.

A Haber, an Istanbul-based news network, released footage showing the man, identified as Mohammed al-Rashed, speaking to the girls in a Turkish town near the border before the trio board a vehicle to cross into Syria. The footage, captured by a hidden camera by Rashed, recorded in Gaziantep, a Turkish province bordering with Syria, shows Rashed welcoming the girls as they exit a taxicab. He tells them they will be in Syria "within an hour," as they carry their bags to another vehicle and adds that he will not go with them.

The station also released exclusive footage of the man as he is escorted to a police station in southeastern Turkey.

A Haber reported that the 28-year-old man was a dentist who fled the conflict in Syria into Jordan. He sought asylum in another country before the Canadian Embassy became interested in his asylum case. He then traveled to Canada by approval of the embassy and stayed there for a while before returning to Jordan. A Haber correspondents claimed he contacted a Canadian embassy official in Jordan called "Matt" and quoted Turkish police sources that Matt was likely an employee of a British intelligence service. Kubilay Gülbek, a senior correspondent for A Haber, said Rashed only acted as a smuggler and was paid by the intelligence service. Gülbek said that based on information discovered on Rashed's laptop computer, he helped 140 Britons travel to Syria to join ISIS apart from the three girls. Rashed allegedly handed recruits to an ISIS commander who is a British citizen. Quoting his sources, Gülbek said the three British girls were currently in Raqqa and were "brides" for ISIS militants.

He told A Haber that Rashed relayed information about people he smuggled into Syria to "Matt" from the Canadian Embassy via WhatsApp. Gülbek said the current addresses of ISIS militants in Britain who left the armed faction and maps of ISIS camps in Syria were also found in possession of al-Rashed.

Footage of the suspected Canadian spy being taken to the courthouse and hospital, following normal detainment procedures

Rashed reportedly helped the girls to travel to Gaziantep, a province on the Turkish-Syrian border, on Feb. 18 and handed them over to an ISIS militant there. He was detained on Feb. 28 in Şanlıurfa, another Turkish province on the border. Turkish newspaper Star reported that Rashed was arrested on March 4 by a court and confessed to smuggling the girls into Syria. Star newspaper also released excerpts from the purported interrogation of Rashed by Turkish security services. He told police he was working for Canadian intelligence and contacted Canadian intelligence agents occasionally in a Canadian consulate in Jordan. He said he informed Canadian intelligence officers about smuggling the girls on Feb. 21. Rashed claimed he was looking to be granted Canadian citizenship by helping the intelligence service.

Star also reported Rashed entered and departed Turkey 33 times starting in 2013 through Istanbul and border crossings between Turkey and Syria. The article said photos of passports of 20 people, including the three British girls, were found on the hard drive of the computer in his possession, along with hidden camera footage showing potential ISIS recruits traveling to Syria. Several documents containing his correspondence with the Canadian intelligence service were also discovered on the hard drive. Rashed reportedly had money transfers from Britain, from $800 to $1500, from people with Arabic-sounding names. He told police he sent money to his relatives in Syria's Raqqa through a jeweler in Şanlıurfa.

A spokesperson for Canada's Ministry of Public Safety and Emergency Preparedness responded to an inquiry by Daily Sabah and said Canada was "aware" of the reports but "will not comment on operational matters of national security." The Canadian Embassy in Turkey had declined to comment on the matter on Thursday.

Michel Juneau-Katsuyo, a former agent for the Canadian Security Intelligence Service (CSIS) told Canada's iPolitics that Rashed may be a "human source" for the agency, noting that they are not considered employees of the CSIS. He said it would be "a diplomatic crisis" with Canada if al-Rashed acted with knowledge of his handlers or acted under their orders. He said he was probably tied to ISIS and knew about methods of infiltration.

Speaking at a press conference in Ankara on Friday, Çavuşoğlu said the flow of foreign fighters was "a complicated situation." "We have people working for both sides (ISIS and intelligence services). Now we have a person working for the intelligence service of a coalition country although (he or she) is not a citizen of that country. This person is a Syrian national. It is so complicated. Other countries should cooperate with Turkey on intelligence sharing," he said.

Çavuşoğlu criticized accusations Turkey was facing for allegedly failing to keep its borders safe against the flow of ISIS recruits. "It is a very complicated situation, a very challenging one. Turkey is doing what it is supposed to do," he said, noting that his country had imposed an entry ban on 12,519 people seeking to join ISIS so far and captured and deported 1,154 others. "We had no intelligence from abroad for half of them. They were apprehended thanks to the meticulous work of our intelligence and security services," he underlined. He said some deported people involved in attacks in their country of origin, such as attacks in France's Nice and others attempted to return to Turkey. "It is unfair to heap entire responsibility onto Turkey," the minister stated.

"It is only natural to ask Turkey to take measures, and Turkey already took them and are stepping them up. We set up centers at airports, mass transit hubs, on the borders to scan (suspicious people)," he said. He stated that although cooperation between countries improved, there is still "shortcomings in sharing intelligence" from other countries to enable Turkey to actively stop the flow of militants.

The video footage filmed by the suspect himself shows the girls' detailed journey from Turkey into Syria. The three girls first arrive at Istanbul Ataturk Airport, then head to the southern city of Gaziantep near the Syrian border. In Gaziantep, they take a cab to the location which they had been earlier informed about and are greeted by the suspect.

The suspect starts filming with his camera when the girls arrive and asks for the girls' names. He instructs them to take their baggage and not to leave anything behind. He informs the girls that they will be in Syria within one hour. The girls' journey then continues in another car. The suspect delivers the girls to ISIS in Syria and returns to Turkey, later to be apprehended by Turkish authorities.

The case became a point of contention between the U.K. and Turkey. Seeking to dodge responsibility, British police had claimed that they notified Turkish authorities immediately after the girls arrived in Istanbul while Turkish officials said the notice came three days later. British Prime Minister David Cameron had blamed Turkish Airlines, the country's national carrier, for allowing the girls to board the flight to Istanbul. The three teenage girls then headed to the country's lengthy border with Syria to join ISIS. The carrier responded with a statement, pointing out that it was the British security forces' task to screen travelers and that the girls boarding the flight was legal.