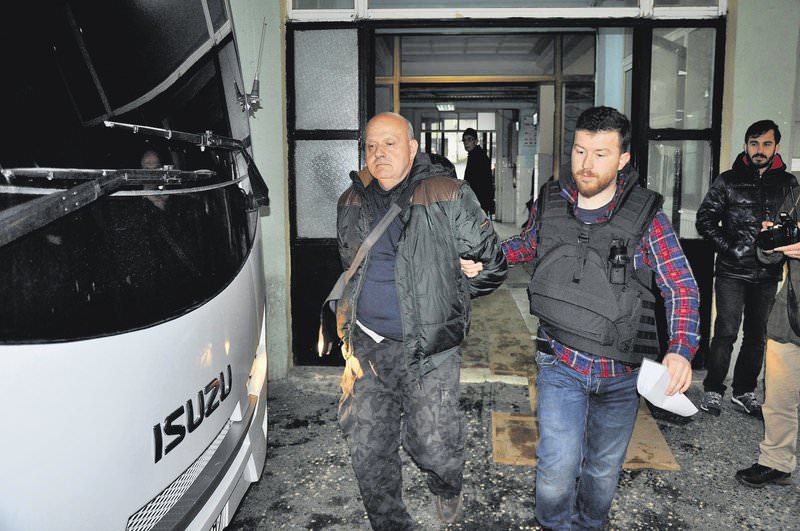 | AA Photo
by daily sabah Apr 04, 2015 12:00 am
The investigation into Stephan Shak Kacynski, a British national of Polish origin, has revealed that the suspect who was recently detained under the scope of the DHKP-C probe is a spy working for Germany's Federal Intelligence Service Bundesnachrichtendienst (BND).

Kacynski and several others were arrested under the scope of the DHKP-C operation on Saturday.

Stephan Shak Kacynski was among the suspects detained at the Turkish National Police's dawn raids at several locations in Istanbul on Thursday against the Revolutionary People's Liberation Party-Front (DHKP-C).

The 52-year-old freelance journalist is accused of having links to the terrorist organization that killed a prosecutor on Tuesday and attacked a police headquarters on Wednesday.

Kacysnki, who occasionally writes articles on the terrorist organization on various websites, is a frequent traveler to Turkey. According to media outlets, he is a former member of the Communist Party of Great Britain, a Marxist-Leninist movement and he monitored the trial of an Austrian national accused of joining a DHKP-C rally for the Scottish Socialist Party. He was present as an observer on trials of DHKP-C members in the 1990s and early 2000s. Turkish media outlets, quoting intelligence sources, reported that Kacysnki was involved in the "activities" of the terrorist organization in Germany and Greece and often visited Istanbul and had contacts with various groups affiliated with the DHKP-C.

Police raided 38 different locations, including a culture center and buildings of some associations in Istanbul's Okmeydanı district, following an assault on Istanbul's police department, in which one attacker was killed and another was arrested.

Two unlicensed guns, an automatic rifle, a jammer device and a numbers of bullets were seized during the operation.

The police operations came after a hostage standoff on Tuesday where members of DHKP-C raided an Istanbul courthouse and killed Turkish prosecutor Mehmet Selim Kiraz.

On Wednesday, 29 people with alleged links to the terrorist group were also detained in western İzmir, Eskişehir and Antalya.

The incident was the latest episode in the terrorist organization's attacks, ranging from a suicide bombing at the U.S. embassy in 2013 and a string of assaults on security forces.

The terrorist organization is known for having foreign support, especially from far-left organizations in Europe. The support from abroad for the DHKP-C is not confined to individuals. Greece and Syria, two neighbors of Turkey, are known for harboring members of terrorist organizations. Greece houses Lavrion, a refugee camp where the militants, treated as asylum seekers, are trained by senior leaders of the organization. Syria, where the terrorist group was founded in 1994, is also known for openly harboring militants, especially at a time of strained relations between Turkey and its southern neighbor.

According to reports in the Turkish media, the DHKP-C has a "base" in Syria's coastal city of Latakia and is supported by al-Mukhaberat, formidable intelligence service of the al-Assad regime. An article in the Yeni Şafak newspaper quoting intelligence sources reports that 52 DHKP-C members are trained at the base and Turkish intelligence suspects they may carry out attacks in Turkey. The article also points out that Mihraç Ural, a Turkey-born militant who heads a splinter group of a movement that the DHKP-C fell out with, now coordinates training of DHKP-C members in Syria.

The DHKP-C was founded in 1978. Purportedly supporting Marxist-Leninist ideology, it was mostly active during the Cold War era. The group has revived its attacks in recent years.

Targeting security officials, high-profile politicians and carrying out suicide bombings, DHKP-C is listed as a terrorist organization by Turkey, the United States and the European Union.