Dozens of Gülenists detained in second wave of cheating probe 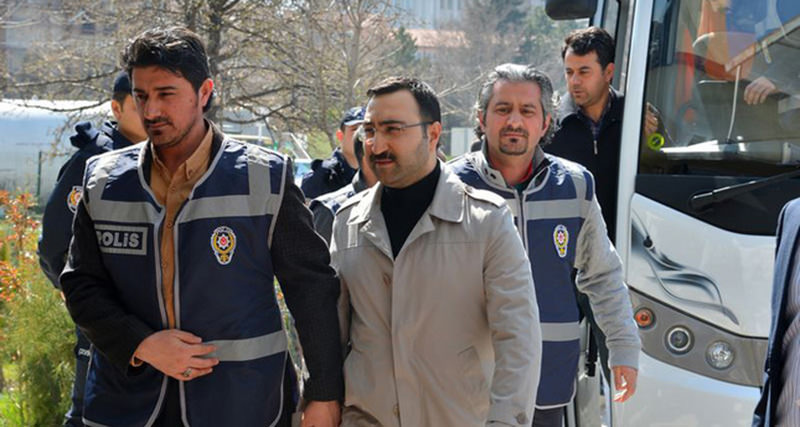 32 out of 62 Gu00fclen Movement-linked suspects were arrested in the first wave of the operation on 27 March (AA Photo)
by daily sabah Apr 20, 2015 12:00 am
PolIce units have launched the second wave of the Public Personnel Selection Exam (KPSS) cheating probe in 28 provinces across the country and took 35 of 78 suspects into custody on Monday morning.

After a Gülen Movement-linked Twitter account released details of the pre-dawn raids on Sunday night, many of the suspects have reportedly left their addresses with some leaving the country to escape being arrested. Similar tip offs were already announced by anonymous Gülen Movement-affiliated Twitter accounts, hinting to the movement's deep infiltration into state institutions, mainly the judiciary, police department and media.

The operation was launched jointly by the Ankara Police Department's Anti-Smuggling and Organized Crime Bureau and Financial Crime Bureau and was put into action to investigate Gülen Movement-linked suspects' alleged involvement in the KPSS mass cheating in 2010, in which Fethullah Gülen is the prime suspect. In the first wave of the operation, 32 out of 62 Gülen Movement-linked suspects were arrested on March 27.

According to the Ankara Chief Prosecutor's Office, 3,227 people answered 100 or more questions correctly in a certain section of the 2010 examination. The exam itself is composed of 120 questions.

In the first wave of the operation, 32 out of 62 Gülen Movement-linked suspects were arrested on March 27. According to the Ankara Chief Prosecutor's Office, 3,227 people answered 100 or more questions correctly on a certain section of the 2010 examination. The exam itself is composed of 120 questions.

Arrest warrants have been issued for two suspects in the first phase of the probe. Senior Gülenist figure, Berat Koşucu, who is accused of sending KPSS questions to some students via e-mail, and Mehmet Hanefi Sözen, who is the founder of an educational association where the questions were illegally distributed, may be served with a Red Notice by Interpol in the coming days, since two names have fled the country.

The KPSS investigation, in which Gülen is the prime suspect, has been merged with a previous case that concerns wiretapping claims against him and his movement and also the Tahşiye case, in which Gülen is accused of demonizing a rival religious group through illegal means. The Justice Ministry is currently combining all three cases and preparing all the necessary documents to ask Interpol to conduct an investigation and issue a Red Notice.

The investigation report on the probe says that the Gülen Movement, which is accused of infiltrating key state bodies in an attempt to overthrow the government, distributed the answers to the exam from one of their educational associations in the capital city of Ankara. Officials investigated the hard drives of three computers seized in the association's building, and the investigation report shows that one of the prime suspects, Sözen, had personally contacted 138 movement members, all of whom answered all the questions correctly.

Following the breaking of the cheating scandal, Baki Saçı, who is among the suspects in the KPSS case, had reportedly confessed that Koşucu had sent him the questions for the 2010 KPSS a day before the exam. In his testimony, Saçı reportedly said that Koşucu had called him to tell him to check his email. "I have a gift for you," he reportedly told Saçı, who had no access to the Internet in his village. The suspect added that he called a friend, Mustafa Süleyman İnanç, who works as a jeweler in the town, and asked him to access his inbox so that he could have a copy of the questions as well. İnanç, who was also detained in the KPSS operation, had reportedly given the same statement in his testimony.

Also, Public Prosecutor Yücel Erkman probing the cheating scandal yesterday filed a complaint against Şadan Sakınan, former Ankara Deputy Public Prosecutor, who carried out the probe before. Prosecutor Erkman claimed that Sakınan is linked with the crimes of obscuring evidence and leaking information, as one police officer informed the association about the probe to be launched a day before. In his complaint, Erkman claimed that Police officer Ömer G. called the founder Sözen one day before the operation to leak information to him, and computers were formatted in the association on that day. Exam booklets in the 2010 KPSS that may have served as evidence were destroyed, and Sakınan is linked with those crimes.

Former Head of the Measurement, Selection and Placement Center (ÖSYM), Ali Demir, in his testimony to the Prosecutor Erkman in early April, said that it was Sakınan who gave the command to destroy the exam booklets and exam IDs. Demir also stated that he thought that questions were distributed in 2010 KPSS and pointed out that the same cheating also took place in the 2012 Judicature Exam, after which ÖSYM cancelled the exam and filed a complaint.

The Gülen Movement has over 140 private schools and charitable organizations around the world, including in the U.S., Europe, Asia and Africa. Some countries hosting Gülen schools have begun to question their mission, with some calling its "shadowy structure" problematic. President Recep Tayyip Erdoğan has emphasized in no uncertain terms that the schools affiliated with the movement should be shut down, citing their alleged illegal activities, and has vowed to replace them with new schools supported by the National Education Ministry.
Last Update: Apr 20, 2015 8:46 pm
RELATED TOPICS