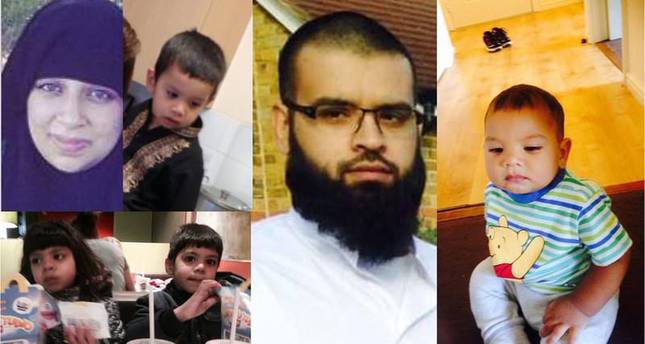 EPA Photo
by Daily Sabah with Wires Apr 20, 2015 12:00 am
Acting on intelligence information provided by British officials, units from the Ankara Police Department tracked a British family of six en route to Syria to join the Islamic State of Iraq and al-Sham (ISIS) extremist group, and detained the family after locating them at a hotel on Monday evening.

The family, including four children aged from one to seven years old, were detained in Ankara. The parents are Asif Malik, 33 and Sara Malik, 29. The family from Slough, west of London, apparently crossed into Turkey by land, coming from the western border with Bulgaria.

British authorities had alerted their Turkish counterparts that the family, which was reported missing on April 16, was heading toward Syria. Relatives had issued an appeal saying they were concerned.

The family was last seen on April 7. Police released footage showing the family landing by boat in Calais, France, from Britain. Authorities assume they made the rest of the journey by land.

Thames Valley Police said they were aware of the group's detention and were "working with the Turkish authorities to safeguard the family." A Foreign Office spokeswoman said the government was "urgently looking into reports that six British nationals have been arrested in Turkey."

"We stand ready to provide consular assistance," the spokeswoman said. British media reports said Asif Malik had attended sermons by extremist preachers. He was a member of the banned extremist group al-Mujahiroun and had known the group's former leader, Anjem Choudary, for about 10 years, the Guardian reported. "He is a very studious man, a very good Muslim character," the newspaper quoted Choudary as saying. Malik was photographed last year outside the Lebanese embassy in London holding a banner urging: "Stop terrorism against Sunnis," and "Islamic State is solution."

Recently, British police arrested six people on suspicion of terrorism after Turkish authorities stopped a group crossing the Syrian border to join ISIS. The continuous influx of foreign fighters of British nationality has raised questions over the capability of U.K. officials to spot and prevent potential fighters that are looking to join ISIS.

Turkey deported the nine Britons, including the son of a local councillor from Rochdale, last Tuesday, two weeks after arresting them for attempting to cross into Syria to join ISIS. The four children have been placed in the care of a guardian.

Turkish and other security services estimate some 600 Britons, including Mohammed Emwazi, named "Jihadi John" in the British media, who has appeared in several ISIS beheading videos, have joined ISIS. About half of the 600 are thought to have returned home. Britain had already become the target of accusations following its failure to spot three British girls who left their homes to join ISIS through Turkey. The British, who initially dodged responsibility and placed the blame on Turkey, were forced to accept their failure in spotting the teens in time. They later apologized to the families of the teens for the mistake. However, apparently unable to learn its lesson, Britain continues failing to prevent its citizens from joining ISIS and causes Turkey difficulties, as it purportedly fights alone against the problem.

Those deported were of different origins varying in age from 15 to 35. The suspected foreigners claimed that the purpose of their visit was work, tourism or visiting friends or relatives, but security forces who had suspicions about the possibility of them joining ISIS sent them back to the countries where they had traveled from.