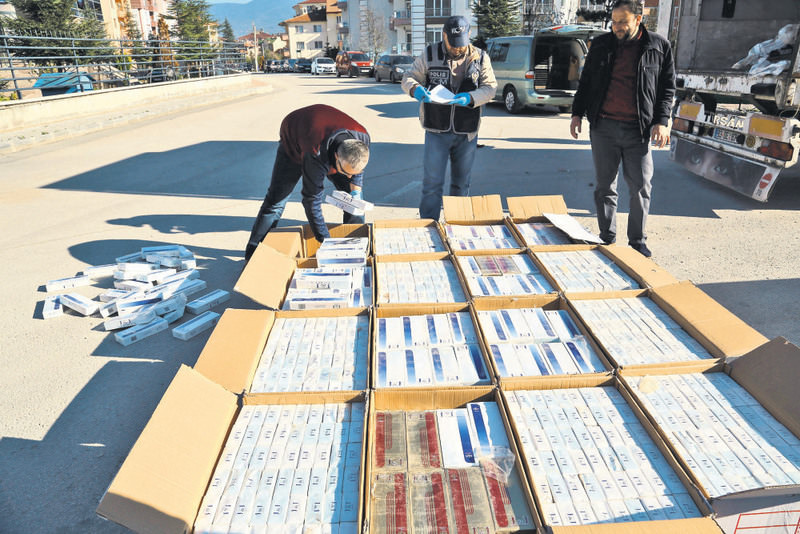 Police in the city of Bolu sorting out smuggled cigarettes found in a truck. Cigarette smuggling is a common concern for both Turkey and Bulgaria.
by daily sabah Apr 24, 2015 12:00 am

Following a recent operation that nabbed a gang smuggling cigarettes between Turkey and Bulgaria, authorities in both countries seek to boost cooperation to clamp down on the lucrative illegal market, Turkish media reports

Smuggled cigarettes are among the common items street vendors hawk all across Turkey despite continuous operations by law enforcement to crack down on the illegal trade. Cigarettes smuggled from neighboring Bulgaria are prevalent among those on sale. However, a recent operation on the Bulgarian side of the Turkish-Bulgarian border revealed Bulgaria itself is a victim of smuggling.

Last month, 26 people, including customs officials, were arrested at Bulgaria's Kapitan Andreevo border crossing, situated across from the Kapıkule border crossing in Turkey. Along with them, Bulgarian security forces confiscated two trucks full of smuggled cigarettes worth about 8 million euros ($8.67 million). The gang had reportedly been operating on the border crossing for four years before the operation began after surveillance operations. An investigation found that cigarettes produced in Ukraine are sent to Turkey by sea legally and then smuggled to Bulgaria. Once it crossed the border, members of the Bulgarian gang working at customs changed the license plates of the trucks and trucks then disappear without being subjected to any inspection. The gang made a profit of 16 million euros monthly and only last year, 160 trucks were used in smuggling the cigarettes. Cigarettes are either sold in Bulgaria illegally or sent to other European countries.

Although Turkish authorities can track any trucks using Turkish territory for the transfer of goods to Europe or other countries, the prevention of trucks is not legal since they all have official documents allowing the transportation of the goods.

Following the operation, Turkish and Bulgarian officials held a summit according to Turkey's Milliyet newspaper to discuss efforts in countering the cigarette smuggling. Bulgarian authorities asked for more assistance from Turkey while Turkish officials reportedly expressed concerns about Bulgar Tabac, one of the oldest cigarette producers in the Balkans that was privatized in 2011. Bulgar Tabac products exported to Dubai are smuggled into Turkey through Syria, Iraq and Iran in a scheme organized by local gangs in the region. The products skip taxation in Dubai as they are sent to duty-free shops, enabling smugglers to cut costs. Bulgar Tabac products like Prestige cigarettes often end up in stalls of sellers of smuggled goods.

Turkish police organized crime units seized 99.1 million packs of cigarettes in 2012 alone, according to the most recent statistics. This figure was 69.7 million packs in 2011. Bootlegged cigarettes cause a tax loss of about TL 3.3 billion ($1.2 billion) for the country.

According to data provided by Turkey's Tobacco and Alcohol Market Regulatory Authority (TAPDK), the sale of smuggled cigarettes is particularly high in southeastern Turkey, the first destination of smugglers through the southern and southeastern borders.