Investigation underway over mosaics ruined during restoration in Hatay, Turkey 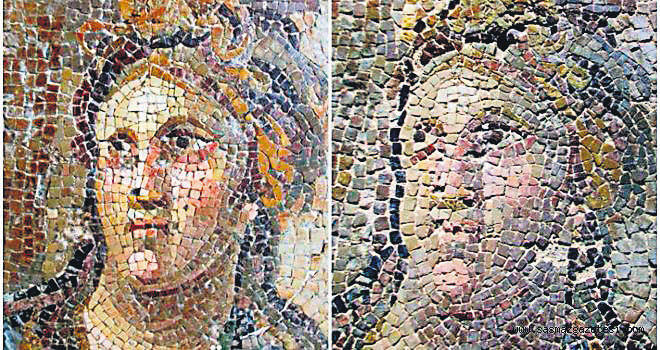 Hatay Archaeological Museum is home to a large mosaic collection. However, as these photos by mosaic craftsman Mehmet Dau015fkapan show, the restoration of the mosaics dramatically distorted the original state of the artifacts.
by Daily Sabah May 05, 2015 12:00 am

Two Roman mosaics on display at a museum in the southern Turkish province of Hatay reportedly have fallen victim to a botched restoration job, Turkish media outlets have reported.

Mosaics at the Archaeological Museum of Hatay, home to one of the world's largest collections of Roman mosaics, underwent restoration while they were being moved to their new premises at the museum. A local newspaper in Hatay quoted a mosaic craftsman who noticed the difference between the original and the restored state of the mosaics. Mehmet Daşkapan told Antakya daily that he saw "serious restoration errors in at least 10 mosaics."

One of the mosaics dating back to 2 A.D. depicts Isis, a goddess in the Egyptian and Roman pantheons. Its pieces were apparently missing or their places in the mosaic were changed, Daşkapan said.

Before-and-after photos of the mosaics clearly show the mosaics are a far cry from their original state and look like they have been shoddily assembled.

Turkish media quoted a written statement by Mustafa Bozdemir, a senior official at the Culture and Tourism Ministry's Heritage and Museums Department. Bozdemir said an investigation committee had been established to look into the situation. The Antakya daily reported that ongoing restoration work at the museum was cancelled after an initial inquiry.

Hatay Governor Ercan Topaca told Anadolu Agency they were informed about the "wrong installation" of mosaics in March and informed the Culture Ministry. Topaca said the restoration, conducted by a private company, was suspended. However, he highlighted that the company was experienced in restoration work and also undertook the restoration of mosaics in Zeugma, a world-famous mosaic museum in Turkey's Gaziantep province.

"We are now looking into ways on how to correct the restoration errors. We have a large number of mosaics that will be moved to the museum and it is important to do it properly. We contacted the Culture Ministry who took the necessary measures," he said. The governor added they brought in experts from other cities to inspect the ongoing restoration work, and they would investigate if officials tasked with monitoring the restoration work had a role in the incident.

He gave the number of mosaics subject to restoration errors as nine and errors could be repaired by "experts and technology." The governor also noted that mosaics, brought in from the old museum, might have been damaged during the move to the new premises, as mosaics were glued on concrete in their former display site.

The museum, which partially opened last year, exhibits some 1,400 square meters of mosaics brought in from various sites in Turkey. Less than half of the museum's inventory, composed of mosaics currently held in storage, awaits being exhibited after the restoration. Mosaics were recovered from archaeological excavations in the 1930s and were on display at the old archaeology museum in Hatay since the 1940s.

Turkish media was quick to draw comparisons between the incident and the infamous restoration of the "Ecce Homo" fresco in Spain in 2012 when an elderly woman's amateur restoration of a fresco depicting Jesus Christ in a church turned the religious figure's portrait into a creature of unknown origin. As Turkish social media users highlighted, restored mosaic portraits look like "freaks" rather than proper depictions of ancient gods and goddesses.
Last Update: May 06, 2015 10:48 am
RELATED TOPICS