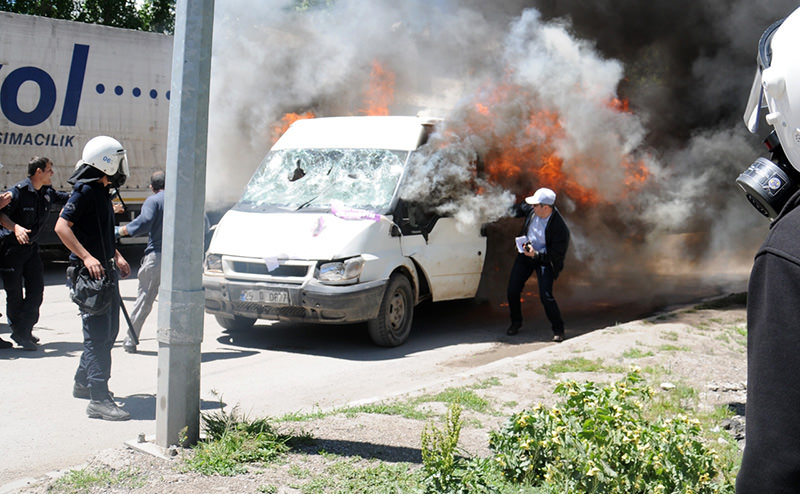 | AA Photo
by Anadolu Agency Jun 04, 2015 12:00 am
Two vehicles belonging to the pro-Kurdish Peoples' Democratic Party (HDP) have come under attack in two separate incidents in eastern Turkey, which has resulted in the death of one driver and left another injured, police said Thursday.

A minibus driver suffered serious burns injuries when a mob set ablaze his vehicle, which was plastered with HDP posters, in Turkey's eastern province of Erzurum Thursday, police said.

According to the police, the minibus was heading towards an HDP election rally in the province when a group of unidentified attackers pelted stones on it. This resulted in the driver losing control of the vehicle, which eventually hit a pole.

The mob continued to attack the vehicle even after police intervened. One police officer also suffered head injuries in the incident.

The vehicle was set on fire when it was tied to a police tow truck, leaving it severely damaged.

The injured driver was taken to a hospital in Erzurum for treatment.

Police investigations in both cases were ongoing.

The HDP, which is standing as a party for the first time in a general election, is seeking to pass the 10 percent threshold that will allow it to enter Turkey's Grand National Assembly.

The party currently has lawmakers who stood as independents in the 2011 election and joined the party after being elected.

Approximately 56 million Turkish citizens will be eligible to vote in the country's 25th parliamentary election to choose 550 lawmakers.