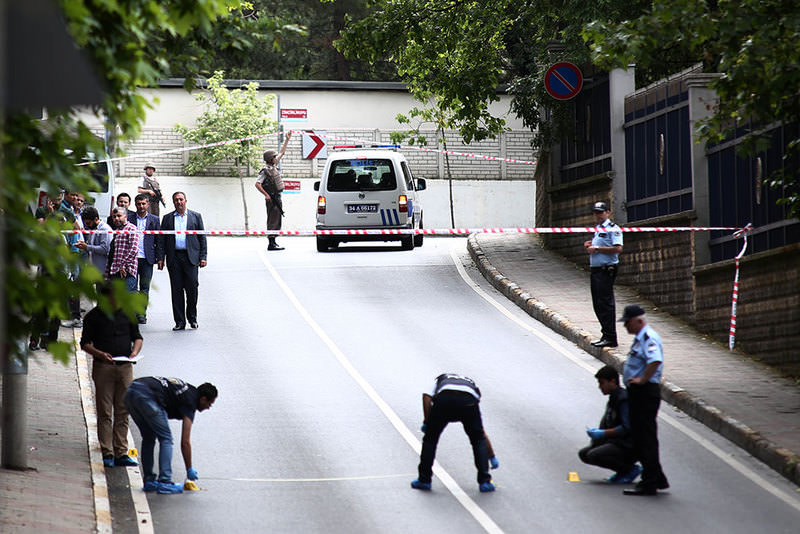 by Daily Sabah with Agencies Jun 08, 2015 12:00 am
While Turkey was surprised at the shooting of a retired colonel in Istanbul's Beşiktaş district on the day of the elections, important details were revealed regarding the identity of the wounded colonel.

Although the police have not released any official statement regarding the incident, Turkish media outlets claimed that the colonel carrying the identity of Çetin Oğuz was in fact Fehmi Altınbilek (67), who carried out crack-down operations against armed left wing groups in 1970's and later took part in Turkey's "deep state" operations. Altınbilek was reportedly under protection and was carrying a different identity as his name was in the death lists of PKK, DHKP-C, TİKKO and MLKP terrorist organizations.

Altınbilek was also linked with journalist Abdi İpekçi's murder and associated with figures that facilitated the relations between mafia, politicians and security forces.

The wounded colonel's health condition is reportedly critical. Altınbilek's wife, carrying the identity of Asuman Oğuz (66), was also wounded during the attack.

It is suspected by security forces that the shooting was carried out as a means to seek revenge by these groups. The police are now examining the security cameras on the street where the colonel and his wife were shot while the motorcycle of the gunmen was found abandoned.

Altınbilek's name first came into prominence when his gun (a lieutenant at the time) was used in the murder of Necdet Güçlü, a military doctor who was killed in a raid by right-wing Grey Wolves group in Ankara University Faculty of Medicine Hospital.

Altınbilek was the military commander of the attack that often cited as an extrajudicial execution which killed prominent revolutionary figure Mahir Çayan and 9 others in 1972. The dead were the founding members of People's Liberation Party-Front of Turkey (THKP-C), a group which had split from other revolutionary groups of the time to carry out armed insurgency. The operation, known as the Kızıldere Incident, was carried in central provinceTokat's Niksar district to rescue three technicians kidnapped from a NATO radar base in northern Turkey. Three technicians, kidnapped to prevent the hanging of Deniz Gezmiş, Yusuf İnan and Hüseyin Aslan, were killed by terrorists as security forces opened fire during negotiations.

The DHKP-C terrorist group, which took hostage and later killed Prosecutor Mehmet Selim Kiraz in March 2015 along with many bloody attacks in the last decade, is among the successors of THKP-C group.

He then took part in the operation that captured İbrahim Kaypakkaya in 1973. Kaypakkaya was the founder of the armed Workers' and Peasants' Liberation Army of Turkey (TİKKO) terrorist group, who was later tortured and executed.

Altınbilek's name was also involved in the murder of Abdi İpekçi in 1979, who was the editor-in-chief of Turkish daily Miliyet and a prominent intellectual of the time. Altınbilek allegedly helped Ağca to flee Turkey as Ağca broke out of jail, who later attempted to assassinate Pope John Paul II in 1980.

Altınbilek was the Ankara deputy gendarmerie commander when two important figures, Uğur Mumcu and Major Cem Ersever, were killed in 1993. A prominent investigative journalist who had earlier written Altınbilek's links with far-right groups as well as deep state organization of Turkey, Mumcu was killed in Ankara in 1993 when a bomb placed in his car exploded. Major Cem Ersever, known as the founder of quasi-official gendarmerie intelligence organization known as JİTEM, was killed in Ankara when he wanted come clean about JİTEM's actions that are linked with extrajudicial executions in Turkey's struggle with the outlawed PKK terrorist group.

Altınbilek's name was also cited in a meeting with Korkut Eken, İbrahim Şahin and Veli Küçük in 2002. Brigadier General Veli Küçük, who is also known to be one of the founders of JİTEM, was amongst the key figures of Ergenekon trials and was accused of leading the terrorist group. Küçük's name is also involved in almost every political murder since 1980's. Eken and Şahin are former members of the Special Warfare Department, whose names were often cited with extrajudicial killings and facilitating the relations among mafia figures, security forces and politicians.