Trial of Ermenek mine executives begins 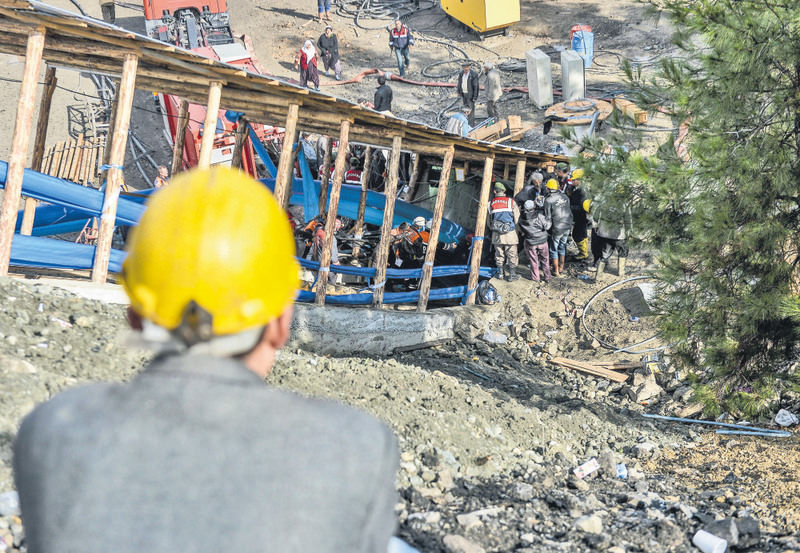 All 18 miners were trapped hundreds of meters below the surface when a sudden flood of water from an old, adjacent mine quickly inundated the galleries. It took weeks to recover all the bodies.
by Anadolu Agency Jun 14, 2015 12:00 am

Today a court in Ermenek will begin its trial of 16 management and technical executives of the Ermenek coal mine, where 18 miners died last October. All executives are accused of willful misconduct

The trial of 16 suspects accused of misconduct as part of the mine accident on Oct. 28, 2014, in the southern Turkish town of Ermenek, which killed 18 miners, will begin today.

According to the indictment prepared by the local prosecutor, mine owner Saffet Uyar and other managerial and technical personnel will face charges of causing more than one death due to willful misconduct.

Prepared by a team of mining experts, the report lists a number of shortcomings in work safety standards and inspections. According to the document, the miners knew the location of emergency exits but were panicking due to a "lack of safety drills."

Victims were trapped hundreds of meters below the surface when a sudden outpouring of water from an old, adjacent mine quickly inundated the galleries and led to an accumulation of coal, slime and debris that blocked movement. According to the report, water that had accumulated in an underground reservoir erupted into the mine as a result of the mining company leaving less space than was required between the old and new mines. Some workers in the mine have said the company ignored complaints of water leaking from cracks days before the disaster and that they continued production for the sake of boosting profits instead of heeding calls for worker safety. The mining company played down the small water leaks, according to the report.

The report found the company "acted against regulations" by failing to report that mining operations were exceeding the space required to meet safety standards. Experts also discovered the galleries, stairs and retaining walls collapsed as a result of improper construction, and the pipes used to drain water from the mine were not installed properly.

Furthermore, the movement of workers during the disaster also revealed how unprepared they were for such an emergency. "Their location shows they were heading to the main entrance and perceived safe areas instead of the proper emergency exits. This reaction must be linked to the lack of emergency drills in the mine. The miners panicked since they had not received proper training in case of an emergency. Moreover, there was a lack of equipment available to be used in emergencies," the report revealed. The report also found that the electricity generator powering the mine was insufficient to supply power throughout the site in case of an emergency.

The report underscored that the flooding was not "a natural disaster" as mining company officials have claimed. 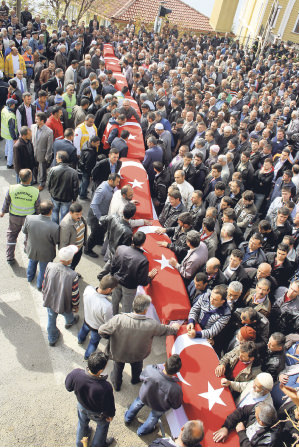 Staff at the General Directorate of Mining Works (MİGEM) of the Energy and Natural Resources Ministry were also found to be negligent. "The company neglected work safety standards despite warnings by MİGEM officials. The mine was shut down on July 25, 2014, but another delegation of inspectors from the MİGEM approved the reopening of the mine after a second inspection on Sept. 5," the report said. "It is obvious that nothing changed in terms of work safety between the first inspection and the second inspection. High-ranking officials at the MİGEM ignored warnings by their subordinates, and therefore, they hold ultimate responsibility [for the incident]," it concluded.

Additionally, the report notes Abdullah Özbey, who leased the mine to Has Şekerler Madencilik, was accused of not informing the company renting the mine about the locations at risk. Also, Uyar, the owner of Has Şekerler, is accused of not requesting maps of the mine showing the places at risk of flooding.

The disaster struck at noon at the privately managed mine in Ermenek, with search and rescue teams reaching the bodies of the dead miners 38 days after the incident.

Uyar, in his statement to the prosecutor, said he could not afford to buy a controlled digging machine and had no knowledge about the previous incidents, water leakage or wet coal. He said he only knew of one instance when there was a small amount of water leaking.

The disaster shook the conscience of the entire nation, with Recep and Ayşe Gökçe, whose son died, saying, "My son didn't know how to swim, what was he doing there?" making the headlines. Hüseyin Gültekin, who died in the mine, had a son only hours after the incident. The 5-year-old son of deceased miner Mehmet Özcan, Ömer Asaf, reportedly said, "Tell my father Galatasaray has a match. He'll immediately come out."

The incident in Ermenek, a mining town in Karaman province, sparked outrage over the lack of worker safety in Turkish mines – an issue that has been in the spotlight since the disaster last May that killed 301 workers in another mine in Soma in western Turkey.

The government pledged to introduce tougher measures against mining companies that neglect the safety of workers as well as to introduce new legislation. A mining bill that imposes tougher regulations on the sector has already been passed. The bill requires employers to assign a job security expert, a doctor and health staff, and stipulates coal miners should be paid no less than double the minimum wage.

The new bill also includes new regulations about reservoir mining, which has drawn criticism following the Ermenek incident. One of the most crucial regulations introduced by the bill will be the cancellation of royalties for coal mining. From now on, private companies will not be able to obtain rights to a mine and then transfer them to another company for higher amounts. With the new bill, whoever obtains the license will also have to operate the mine. Therefore, the public sector will only share coal mines and other underground resources with those willing to operate and exploit them properly, otherwise such resources will not be granted to private-sector companies.

Moreover, from prospecting to operating, all processes will be reported and the level of requirements and qualifications requested from employees has been increased.

Although Turkey has regulations in place to ensure standards in work safety, accidents, or rather incidents, still regularly claim lives. Officials say that regulations are "clearer" than those required by the International Labour Organization (ILO) agreement, which critics have called on Turkey to implement. They also claim that they are meticulous in risk assessment and inspections regarding dangerous sectors such as construction and mining. The country approved full implementation of the ILO agreement last year.
Last Update: Jun 15, 2015 4:30 pm
RELATED TOPICS