Ukraine national gets 9 years in jail for hijack attempt 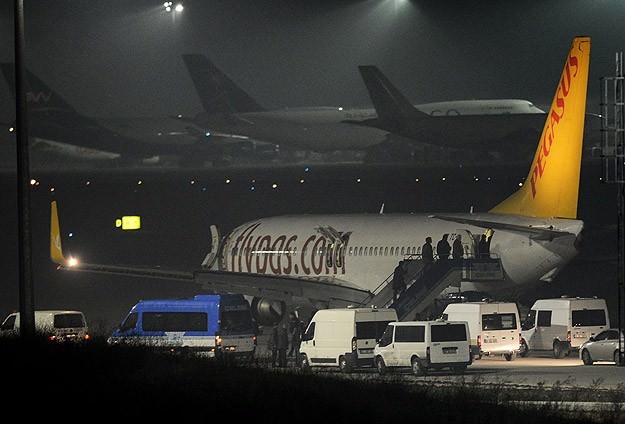 Ukrainian citizen Artem Kozlov has been sentenced to 9 years and two months in prison for attempting to hijack a Pegasus Airlines plane en route from Kharkiv to Istanbul in February last year.

Kozlov attempted to divert the plane to Russian resort Sochi, where Winter Games were being held, in a bid to draw attention to the political situation in Ukraine, he said.

Russia annexed the Crimean peninsula in March last year after part of Ukraine's restive east was overrun by pro-Russian separatists.

"My goal was not to commit a crime. I did not have a bad intention. I wanted to protest in a peaceful way. I did not behave badly and I did not attack anyone," Kozlov said in court Tuesday as he and his lawyer attended the hearing at the 37th penal court of first instance in Istanbul.

Kozlov said he did not have a bomb or weapon on him and told his intention to the stewardesses, with whom he had a "good dialogue", he said in his defense.

"I would like to apologize to Pegasus Airlines if they suffered any harm due to my wrong behavior. I am sorry for causing trouble to pilots and stewardesses. I did not want to unnerve the passengers. I am sorry," Kozlov said.

His lawyer Yusuf Calışkan demanded the acquittal of his client on account of defending himself frankly.

However, the court ruled to convict Kozlov for hijacking and restricting liberty.

The indictment against him had said that he threatened the 110 passengers and 7 crewmembers with blowing up the plane with a bomb, calling for a prison sentence of 11 to 42 years.
Last Update: Jun 17, 2015 3:09 am
RELATED TOPICS